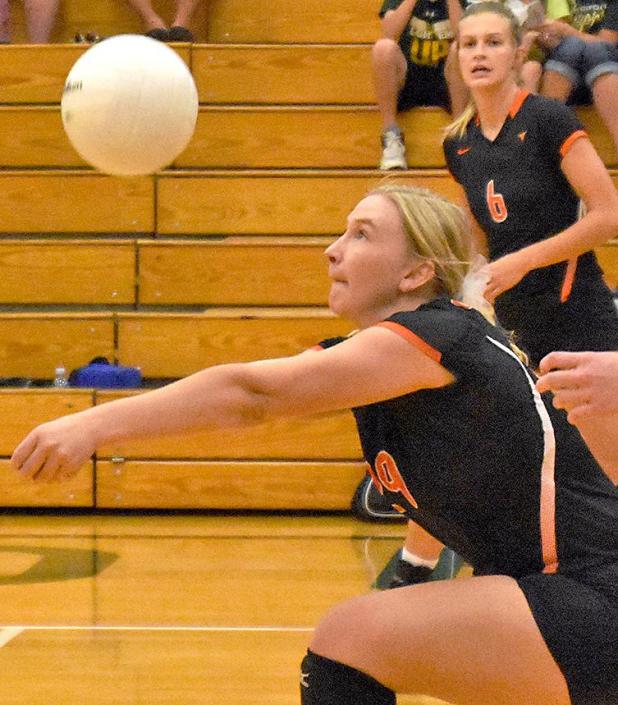 In addition to being the team’s leader on kills, Allison Owings was also active on defense last Thursday against Holyoke, Colo. Here she picks up one of her 14 digs in the match. (Johnson Publications photo) 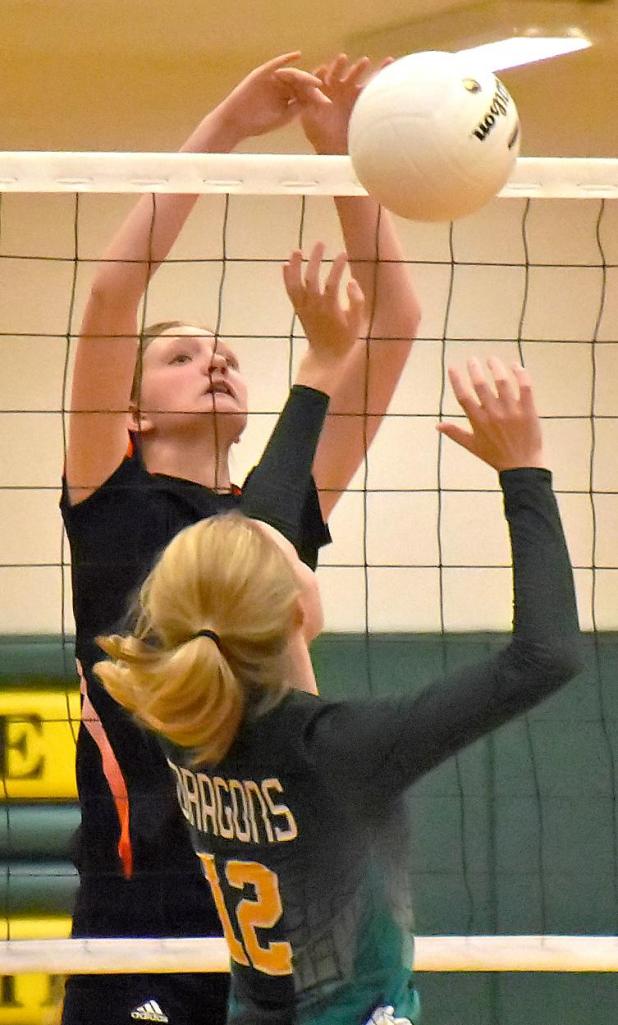 Chase County’s varsity team turned in a 2-2 record in volleyball action last week from a single match in Holyoke, Colo., and
Saturday’s McCook Invitational Tournament.
After defeating Holyoke on their home Colorado court last Thursday, the Lady Longhorns played three matches in the McCook tournament and finished fourth.
That adjusted the CCS record to 4-5 this week before a busy week ahead when Chase County was scheduled for eight matches in a week’s time.
After hosting Sidney Tuesday, Chase County will be home again tonight (Thursday) for a triangular with St. Francis, Kan., and Dundy Co. Stratton (5-2). The varsity schedule, starting at 4 p.m., is:
Chase Co. vs. St. Francis
DC Stratton vs. St. Francis
Chase Co. vs. DC Stratton
On Saturday, the team travels to Sutherland for its invitational tourney, followed by another triangular on Sept. 26, also hosted by Chase County, against Gothenburg (9-3) and Perkins Co. (5-6).
Seeding for Saturday’s Sutherland tourney was to be  announced Wednesday, so Chase County’s first opponent and match time were not known by printing deadlines.
Tuesday’s triangular starting at 5 p.m. will have the following match schedule for the varsity teams:
Chase Co. vs. Gothenburg
Gothenburg vs. Perkins Co.
Chase Co. vs. Perkins Co.
Holyoke win
Chase County took the match win at Holyoke last week in four, 25-18, 20-25, 25-15 and 25-20.
Coach Jodie Schuller said her team played a scrappy game at Holyoke, coming together great on defense to take the best-of-five match.
The team was without its libero, Peyton Fiedler, but Schuller said Allison Owings and Adelaide Maxwell played well in the back row in Fiedler’s absence.
The coach still is seeing too many hitting and serving errors from her team, and that showed up at Holyoke where they missed 12 serves and committed 21 hitting errors.
At the serving line, the Lady Longhorns finished with an 87 percent showing (82-94) with five aces.
Owings led the team at the net with 11 of the team’s 32 kills. Ragan Nickless was credited with seven. The team had a .074 hitting efficiency.
Meanwhile, Holyoke was held to just six kills and finished with a minus .093 hitting efficiency.
With four games played, it was a busy night on defense as the Lady Longhorns handled 101 digs, led by Nickless with 25 and Madison Schuller with 18.
Madison Schuller also tallied 18 set assists in the match.
Coach Schuller said it was the first varsity match in which freshman Alexis Richmond saw action. She contributed “some nice blocks” to Chase County’s effort, she said.
Schuller said her team needs to continue to work on reaching a higher hitting percentage, and improve its passing and serving numbers.
McCook tournament
After winning its opener with a good effort, Chase County dropped its next two matches, finishing fourth at McCook’s eight-team tournament Saturday.
Schuller said her team “connected everywhere” in its opener against Decatur Community (Oberlin, Kan.), winning in two, 25-12 and 25-18.
“We hit and passed the ball really well” against Decatur County, she said.
Despite trailing 2-5 in the first set, the team came together, Schuller said, to take a dominating 25-12 win.