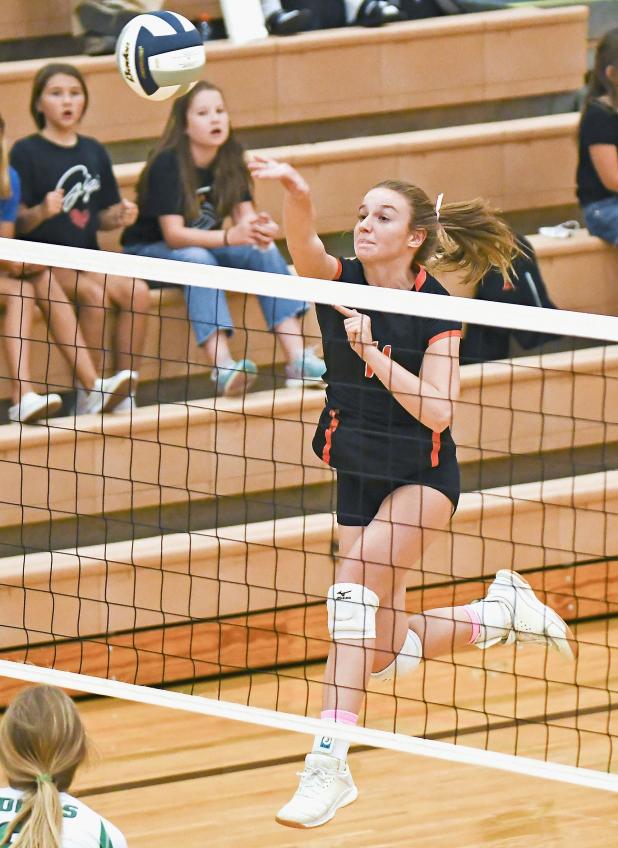 Diane Stamm | Johnson Publications
Jerzee Milner has adapted to attacking and setting for the Lady Longhorns. Milner had seven kills against St. Francis.

The Chase County volleyball team celebrated a 4-1 week and will look to continue its winning ways with three triangulars.
CCS hosted Gothenburg and Perkins County Tuesday, and will be at Sutherland tonight (Thursday) to take on Maxwell and the Sailors. On Oct. 6 the Lady Longhorns will travel to North Platte St. Pat’s to face the Irish and Southwest.
Last week was highlighted with two wins at a home triangular Thursday against Dundy County-Stratton (1-16) and St. Francis, Kansas.
CCS opened the night against DCS.
The Tigers kept the first set close. CCS only held a 9-8 lead, before finishing off the set 25-14. The Lady Longhorns cruised in the second set, as well, winning 25-12.
“We served aggressively and earned 14 aces in this game, and our hitters had one of their best games as well with a pretty open net on a short DCS team,” Coach April Lambert said.
Alexis Richmond had seven kills to lead CCS. Jerzee Milner and Chloe Dillan each had four aces.
The Lady Longhorns ended the night with a three-set match against the Indians.
CCS looked to be in control of the first set with a 24-18 lead. But the Lady Longhorns couldn’t get that last point, and the Indians came back to take the set 24-26.
Shaking off an 8-8 tie, CCS took set two 25-18 before leading throughout a 25-23 win in set three.
St. Francis had only lost one match up to this point in the season, Lambert said.
“They were an aggressive and fundamentally sound team,” Lambert added. “It was a very close game, but Bryn (McNair) really came through for us on the outside attack with 14 kills in the match to put us ahead. Our attacking was the difference maker.”
CCS had 33 kills in the match. In addition to McNair, Milner and Richmond each contributed seven kills. Joee Clevenger had four aces.
The JV team beat St. Francis 25-21, 25-17, while the reserve squad lost 19-25, 25-22, 13-15.
Saturday CCS traveled to Sutherland for its tournament.
The Lady Longhorns faced Southwest in their first match, which saw the first set end 33-31.
Lambert was pleased with her hitters.
“Our hitters had an excellent game against Southwest even though we struggled serving,” Lambert said. “We gave them plenty of opportunities to take set one with missed serves, but I was very proud of the resiliency our girls showed to finish the set all the way to the 33rd point.”
After winning the first set, CCS lost the second set 22-25. A 25-18 win kept the Lady Longhorns in the winner’s bracket of the tournament.
McNair totaled 18 kills and Richmond added 12 kills. CCS finished with 46 kills on 136 swings. Hope Brosius had four aces in the match.
CCS took on 16-1 Overton in its next match.