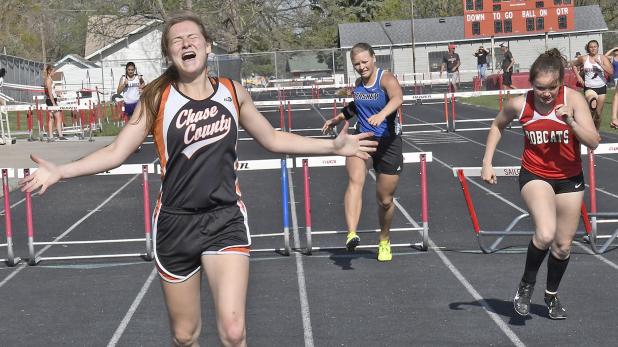 Peyton Fiedler can’t believe it as she crosses the 300 meter hurdle finish in first. She had the fourth fastest time coming into districts, but bypassed top hurdlers Josie Stewart of Hemingford, right, and Hershey’s Ashley Hassett for the gold medal. Fiedler had a banner district performance with three individual gold medals and a fourth as part of the 400 meter relay team. (Johnson Publications photo) 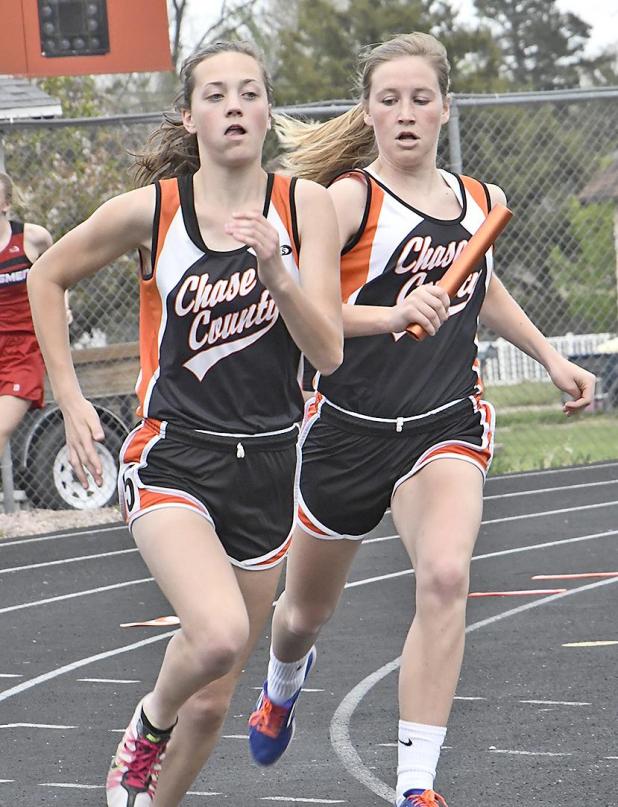 Sophie Spady, who will compete in all three relays and the 800 at state, makes her approach to hand off the baton to Kamrie Dillan for Chase County’s final leg of the 400 meter relay, which took the district gold. Dillan will also compete in the 100 meter dash. (Johnson Publications photo) 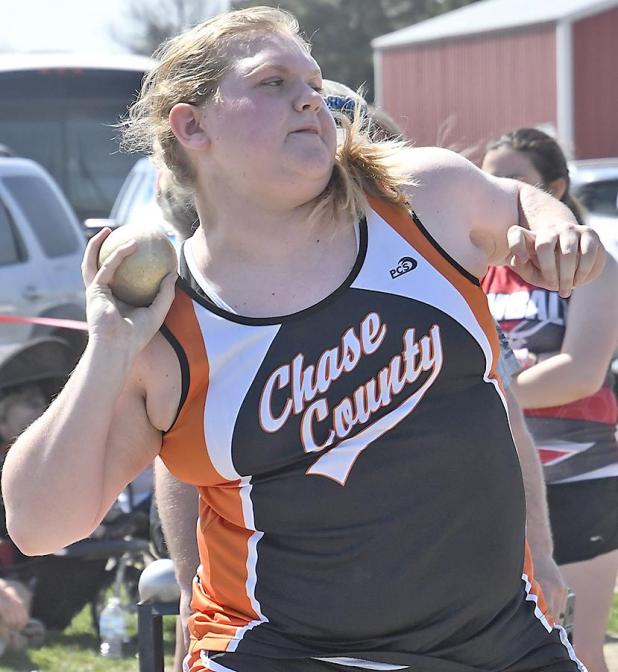 Freshman Sadie Peterson is one of those athletes Coach Hauxwell said represents his philosophy in track. Her PR effort in the shot last week got her into the district finals, scoring one of those extra points the team was counting on for a fifth straight district title by a comfortable margin. (Johnson Publications photo) 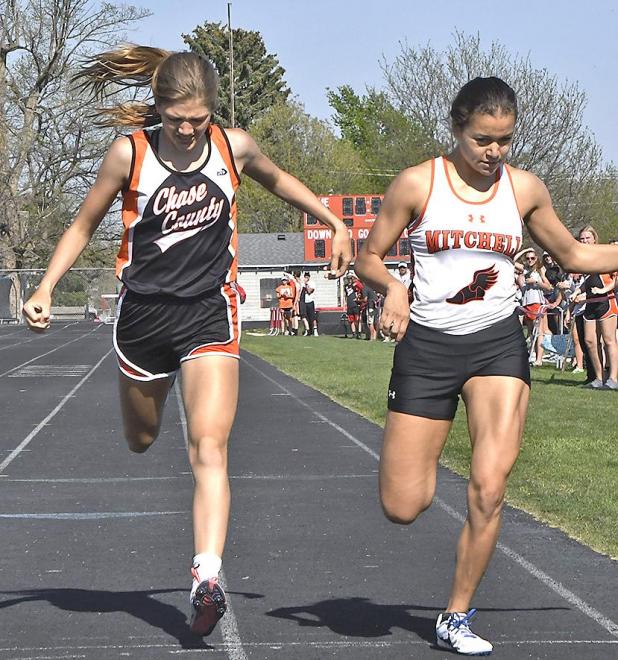 Look at the feet. It was that close, hundredths of a second, between Mallie McNair, left, and Mitchell’s Jori Peters in the 800 at districts  for the silver and gold medals. Both will be up against each other again this week at state. (Johnson Publications photo)

Philosophy that everyone, every point matters lifts girls to another district title

Ten Lady Longhorns will compete in all but four events at state meet
Jan Schultz, The Imperial Republican

On paper, it looked like the Chase County girls could squeeze out a fifth straight district track title by a mere four points.
How the C-9 District title grew to a 29-point margin of victory is a testament to what Coach Troy Hauxwell tries to instill in his team.
“How success happens is when everyone knows they have the opportunity to make a difference, and that those little things matter,” he said.
“When you get that team mentality going, it’s a powerful thing,” he said.
That strong team effort, and Hauxwell’s philosophy, is sending 10 girls to the state track meet in Omaha, where they will compete in 13 of the 17 events, and have a shot at a possible third consecutive Class C title.
Hauxwell pointed to at least 10 different instances at last Thursday’s meet in Sutherland when Chase County athletes went above and beyond their times and marks on paper coming into the meet.
“Again, some of our young athletes really stepped up,” he said.
Athletes like freshman Kamrie Dillan, who ran a PR in the 100 for fourth, splitting a pair of Mitchell sprinters for a four point swing and is headed to state as an extra qualifier. She also scored two points in the long jump in which she hadn’t competed since April 21.
Or, sophomore Brooklyn Christensen, who bumped out a pair of Mitchell vaulters with fifth in the pole vault, causing a three point swing.
And then there’s freshman Sadie Peterson, who threw the shot 34’ 10 1/2” for a PR and sixth place, adding another point to the team tally.
And don’t count out the strong showings from the older team members either.
Mitchell’s Natasha Perez had the fastest 200 time entering districts, yet Adelaide Maxwell runs a PR 26.34 to steal the gold, causing another four point scoring swing.
And senior Peyton Fielder, who took home four golds Thursday, gave her coaches the biggest surprise in the 300 meter hurdles with a season’s best run of 48.18. She had the fourth fastest time entering, but caused a six-point swing in that event alone when she won.
Others who performed better than expected for added district points include Kora Weiss in the 800, sixth; Ragan Nickless in the 400, sixth; Madison Brown in the 1600, third; and the 400 meter relay team that won gold after entering with the second fastest time behind Mitchell.
Mallie McNair went home with four medals, too—two golds and two silvers. Individually, she ran a PR in the 400 at 59 flat to beat Mitchell rival Jori Peters. Their places flip-flopped in the 800 when Peters took the gold by nine-hundredths of a second as both turned in season’s bests.
Andrea Page tossed a PR of 127’7” in the discus to win gold, while teammate Allison Owings took second, both earning a state trip. Owings will also compete in the shot after taking gold.
Sophie Spady got in as an extra qualifier in the 800 after finishing third, and will be in four state events as a member of all three relays, too. She took home a stack of four medals last week.
Nickless will join three other individual qualifiers as part of the 1600 relay team, which finished second last week but earned a state trip as the fastest extra qualifying team.
The 3200 meter relay team won gold by more than nine seconds to make it three-for-three on relay state berths.
Hauxwell believes some of their competition doesn’t always count Chase County’s fourths, fifths and sixth places as team strength.
“We always seem to find some kids who find a way to score,” he smiled.
District meet team scoring was Chase Co.  147, Mitchell 118, Hershey 52, Bridgeport 46, Sutherland 41, Bayard 38, Morrill 28, Kimball 26, Hemingford 15 and Perkins Co. 15.
Here are the top six medal winners at districts.