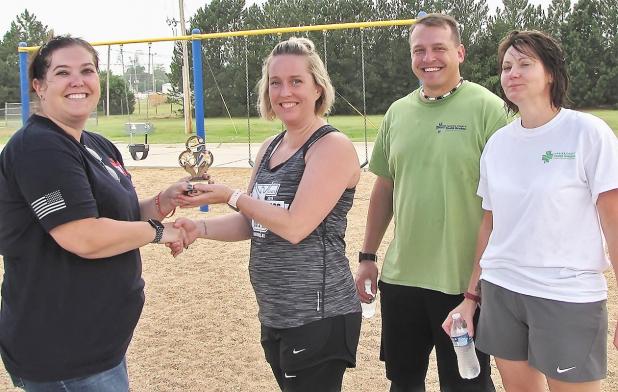 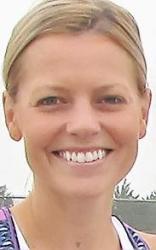 Chase County Community Hospital “CHEWS It or Lose It” Amateur Triathlon was held in Imperial Saturday.
The acronym CHEWS stands for Chase Healthcare Employee Wellness Program.
While the CHEWS program is related to healthcare employees, the triathlon is open to the public. The triathlon’s objective is to promote a healthy lifestyle to area residents.
The triathlon involved six laps of swimming, four miles of biking and a 2.2 mile run/walk.
A team of three people as well as individuals participated. Businesses were encouraged to sponsor teams for the event and compete for a traveling trophy, said Deb Hrcka, the hospital’s assistant executive director.
Residents could compete individually in all three events if they were not part of a registered team. In the three-person team division, each person chose which of the three activities in which they wished to compete.
Winner of the individual  competition was Shana Kraus of Grant with a time of 41.04 minutes, placing her first in that division, as well as the best time overall.
Second place was Lindsey Mendenhall with a time of 46.57 and Kim Wiest in third  at 49.27.
Other participants were Lori Mendenhall and Emily Vogt.
Winner of this year’s 2019 Traveling Trophy was the team sponsored by Perkins County Health with a total time of 46.31 minutes. Members of the team were Josh Cunningham (biking), Diane Zwickl (running) and April Toepfer (swimming).
Medals were awarded to the top three places in individual and team divisions. There is also a traveling trophy which goes to the winning business team. If a business team wins the trophy for three years in a row, they keep the trophy permanently.
Chase County Community Hospital won the trophy in 2012, Imperial EMS service earned the trophy in year 2013 and Perkins County Health won the trophy in 2016.
The CHEWS committee want to see the competition succeed and are planning another triathlon next year to help individuals “CHEWS It or Lose It,” Hrcka said.