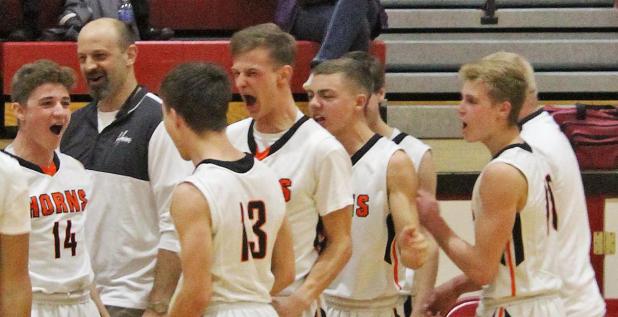 The team celebrates after their overtime win against Mitchell. (Courtesy photo by Tristan Nordhausen)

Kobe Clevenger goes for a layup against Mitchell at the Cabela’s Holiday Tournament on Dec. 31. (Courtesy photo by Tristan Nordhausen)

By Megan Kelley
The Imperial Republican
Due to poor weather the Longhorn basketball team only got one game out of the Cabela’s Holiday Tournament in Sidney on Dec. 31, but they made it count with a one-point overtime win.
After receiving a bye for the first day of the rescheduled tournament, the Longhorns played Mitchell in the championship game last week, winning 62-61.
Prior to the holiday moratorium, Head Coach Chris Bartels had said he was excited for a game against Mitchell.
“They’re a good team; they like to go fast and they have a lot of guards,” Bartels said before the tournament. “I think that’d be a fun match-up.
“I was worried, going 17 days without a game,” he added.
The Longhorns’ last game was at home against Ogallala on Dec. 14. Except for the five-day moratorium, they had a practice every day.
“They say basketball is a game of runs,” Bartels said, “(the Mitchell game) definitely was.”
Bartels was pleased with the start of the first quarter, “but we didn’t end it very strong,” he said.
By the end of the first quarter, Chase County led 14-11.
“We only scored two points in the second quarter,” Bartels said.
One problem Bartels said was adjusting to officials. “But that’s any game,” he added. “The officials you get are the officials you get, so you have to adjust to them.”
Defense was the message at halftime.
“Shots weren’t going in and we were letting that affect our defense,” Bartels said.
The Longhorns went into the third quarter with harder, man-to-man press “and we got a double-digit lead,” he added.
Five different Longhorns hit 3-pointers in the third quarter.
“Hitting five threes in one quarter is tough, but having five different players do it, that’s impressive,” Bartels said.
“I really think it was because of the intensity and the energy that we brought on defense that got us this win,” he added. “It’s just the way this team works. If we’re playing well on defense, the offense is going to take care of itself.”
With a 17-point lead going into the fourth, Mitchell found their game and fought back.
The Longhorns started using timeouts and fouling to keep Mitchell from getting too big of a lead.
A 3-pointer by Kobe Clevenger tied it up at the end of regulation, giving the Longhorns another chance.
After more back and forth between the Longhorns and the Tigers, Chase County was down three points with 25 seconds left on the clock in OT.
Mason Nordhausen sunk a three, tying the game 60-60.
“We fouled them, they made one,” Bartels said. By that time, there were only about six seconds left on the clock with Mitchell holding a 61-60 lead.
During the overtime, Cedric Maxwell fouled out.
After some miscommunication by Mitchell on a pass, Nordhausen stole the ball and passed to Bennett Bauerle.
“All (Bauerle) had to do was take one dribble and make one of the easiest shots he’s probably ever had,” Bartels said. Bauerle made the shot. “It was crazy,” Bartels added.