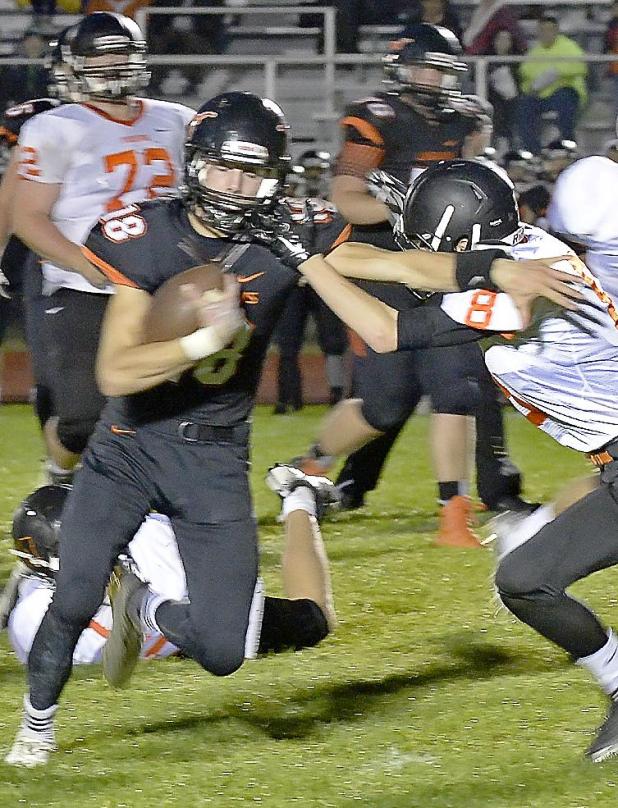 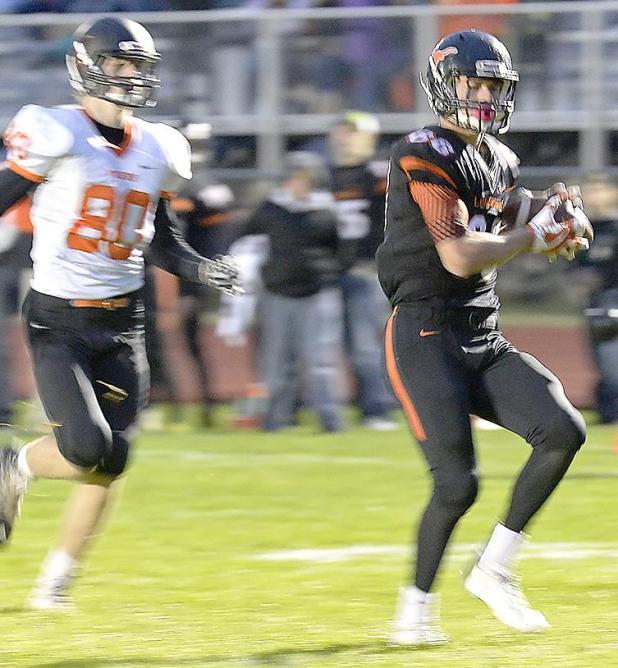 Brandon Space pulls in this over-the-shoulder pass from 28 yds. out for the Longhorns first touchdown of the night. (Johnson Publications photo)

Mitchell showed they had the ability to score with 37 points against Kearney Catholic the week before coming to Imperial.
But the Chase County Longhorns held the Mitchell Tigers’  offense in check, giving up just 13 points, in a 42-13 homecoming win.
Lenners was most concerned about Mitchell’s 5-8, 185-lb. senior running back Drake Gilliland.
He only crossed the goal line once, that coming on a 54-yard touchdown reception. He picked up 153 yards on the ground and his longest run of 35 yards came in the first quarter.
The Longhorns held a 14-7 halftime lead despite missing eight tackles for losses in the first half.
Lenners said they made some adjustments at halftime and cut that number down to two in the second half.
The defense did a much better job in the third and fourth quarters, he noted.
Defensively, the Longhorns came up with three interceptions with Scott Wheeler returning one 72 yards for a fourth-quarter touchdown.
Braden Space intercepted one in the first quarter and scored from 58 yards out, only to have it nullified by a bad block. His pick didn’t result in any points as the Longhorns were forced to punt on the ensuing possession.
Mitchell had problems dealing with the Longhorns’ 240-lb.  senior lineman, Eli Hinojosa. “He was all over the field,” Lenners said.
He played a big role in the Longhorns’ ground game and flattened Gilliland several times.
Lenners said Caleb Weiss read the option well Friday night, picking up 164 yards on just 12 carries. His longest run came on a 45-yard keeper to open the second quarter.     That set up a 28-yard scoring strike to space two plays later.
Before half, he gave the Longhorns a 14-7 lead with a 28-yard touchdown run.
Minden this week
Friday the Longhorns travel to Minden to face the 1-6 Whippets.
While they’re 1-6, they played Kearney Catholic tough Friday, giving up just 30 points in the loss.
Lenners said Minden’s a team the Longhorns can’t be looking by, especially if they want to keep any playoff hopes alive.
Minden looks like a big team on film, he said, and likes to run the ball out of a number of power offenses.
Game time is set for 6 p.m. MT at Minden.
Longhorns score first
After Space’s first-quarter interception return was called back, they didn’t get on the board until early in the second.
After Weiss’ 45-yard run to the Mitchell 28, he hit Space in stride two plays later for the score at the 11:23 mark.
Space added the extra point kick for a 7-0 lead.
Five plays later, Mitchell quarterback Blake Thyne found Gilliland over the middle for a 54-yard scoring strike to tie the game 7-7 with 9:13 remaining in the half.