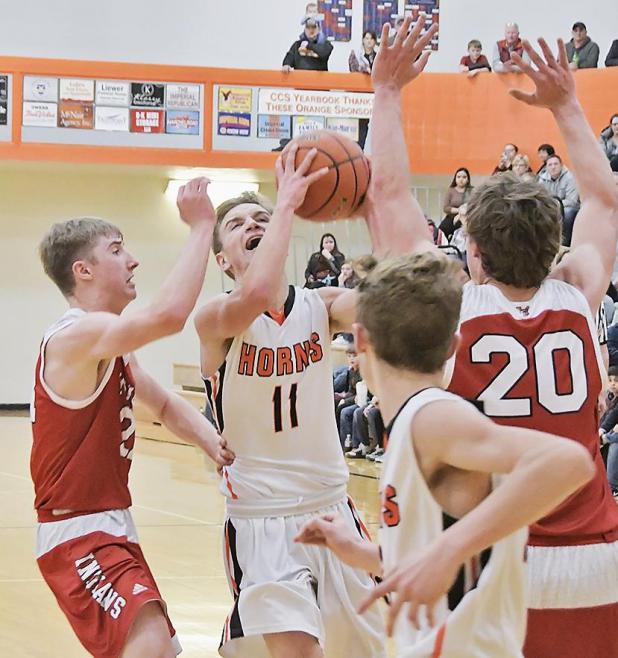 Jan Schultz | The Imperial Republican
Taylor Jablonski battles Yuma defenders to get to the hoop on Feb. 4. 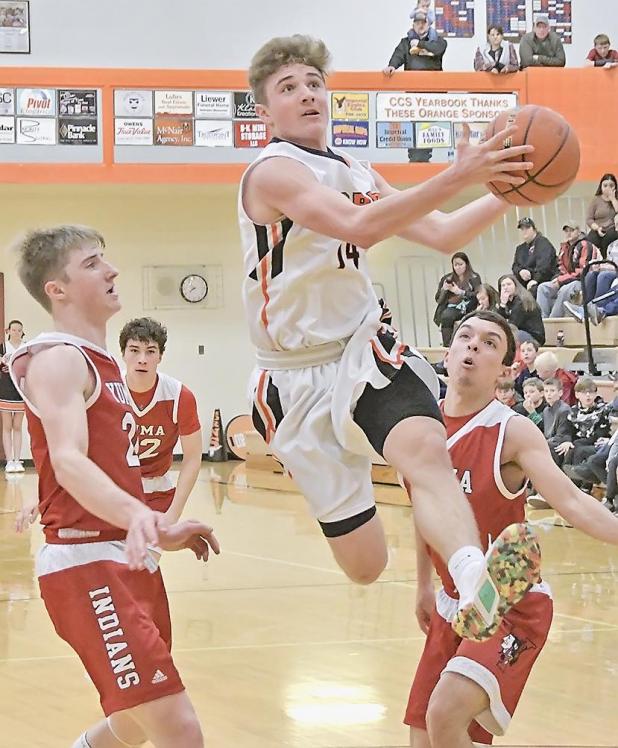 Jan Schultz | The Imperial Republican
Ryan Bernhardt leaps for the basket on Feb. 4 against Yuma.

Last week went about as good as it could have for the Chase County Longhorns, Head Coach Chris Bartels said.
Despite some disappointing losses at the SPVA tournament in January, the Longhorns bounced back the next week with important wins against Haxtun, Colorado and Hershey.
They added to their win streak last week, beating Yuma, Colorado at home on Feb. 4 and North Platte St. Pat’s Friday on the road.
The St. Pat’s win was especially big for the Longhorns, since the Irish bested Chase County in the SPVA tournament.
Last week’s wins pushed the Longhorns up in points for Class C1, where they were sitting at No. 3 on Tuesday.
No. 4 and 5, North Bend Central and Ogallala, are close to the Longhorns, though, only  0.28 points separating No. 3 and No. 5.
Yuma game
When the Indians came to Imperial, they brought their A-game, but the Longhorns took the win, 52-50.
“We really controlled that whole game until about four minutes left in the fourth when they changed up their defense,” Bartels said.
The Indians switched to a man-to-man defense and the Longhorns made a few more turnovers.
“It wasn’t as close as the score made it seem,” Bartels added. “I think that kind of puts a different picture on the game if you weren’t there, because we really controlled it.”
Senior Bennett Bauerle led offensively with 14 points, with Mason Nordhausen close behind with 12.
Also scoring were Kobe Clevenger, Taylor Jablonski, Ryan Bernhardt and Clay Meeske.
The Longhorns went 13-18 from the line, with Bauerle and Meeske making all of their free throws.
Defensively, Clevenger led in total rebounds with seven. Jablonski and Nordhausen each had six.
“No matter what, that was a great win for us and gave us a little bit of confidence going into St. Pat’s,” Bartels said.