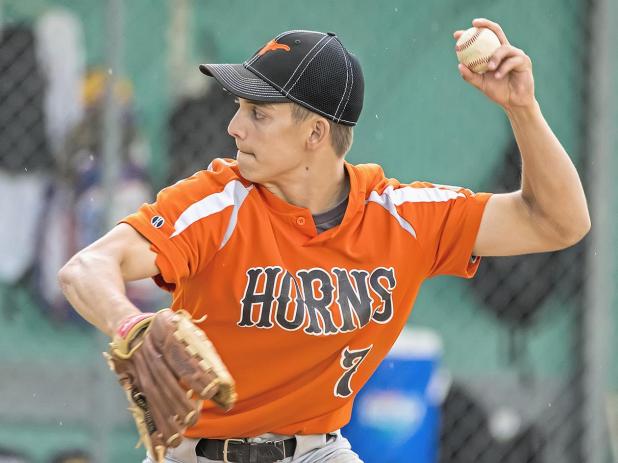 Starter on the mound for Imperial against Gothenburg was Dominic Sis, who lasted six innings and struck out eight in Imperial seniors’ 14-7 loss. (Johnson Publications photo) 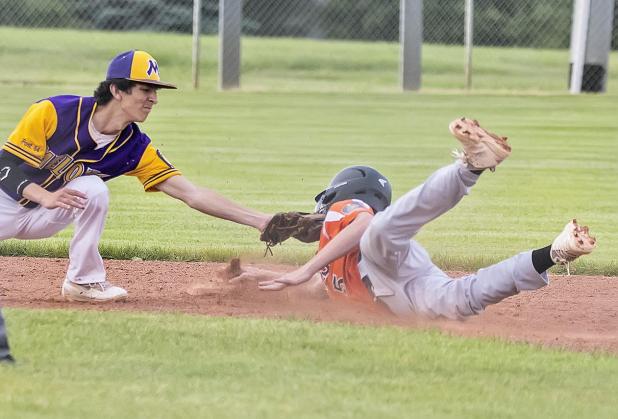 In the senior game last week with Gothenburg, Lincoln Waters safely slides into second about the same time the tag is put down by the Melons’ fielder. (Johnson Publications photo)

Legion packing in games as district tourneys near

Over the past six days, Imperial’s Legion teams have packed in a lot of baseball games.
Ten to be exact since June 26 through Monday night as the end-of-season championships, all-star games and district tourneys make up much of the weeks ahead.
Here’s a recap of Imperial’s games against Gothenburg, Sidney and Ogallala.
Gothenburg games
The seventh inning proved the downfall for Imperial’s seniors June 24 as Gothenburg scored 11 runs to take a 14-7 win.
Imperial led 6-3 heading into the seventh, but couldn’t recover from Gothenburg’s seventh inning offense.
Lincoln Waters, Trevor Peterson and Nolan Burrell combined for six of the team’s nine hits. Peterson hit a single and double, while Waters and Burrell both had a pair of singles.
Starting pitcher Dominic Sis went six innings, allowing three hits and three runs while striking out eight and walking four.
Tysen Lempke and Bennett Bauerle pitched the final inning.
Gothenburg finished with 11 hits, including a lead-off homer in the sixth.
The juniors had an easier time with Gothenburg, taking a 12-4 win after six.
Imperial had a productive third inning as they scored seven runs on four hits and a walk, after putting four across in the second, and another in the seventh.
Trevor Peterson was 2-3 at the plate with two singles. Waters and Bauerle both doubled.
Burrell was on the mound the first three innings, striking out six and walking one. He gave up just one hit and no runs.
Mason Nordhausen finished the last three innings, as he struck out five and walked one, giving up three hits and four runs.
Sidney games
The juniors recorded a pair of home field wins against Sidney June 26.
Imperial took the opener in an 8-0 shutout, as pitchers Morel Jurado and Emmitt Zuege combined for seven K’s and allowed just one hit, a single in the bottom of the fifth.
Six hits were on the books for Imperial. Zuege doubled,while Jaret Peterson, Burrell, Morgan Peterson, Carter Leibbrandt and Jake German all singled.
The nightcap proved to be a high scoring contest, as Imperial won a 13-6 game.
The writing was on the wall after Imperial’s first at-bat, after scoring six runs. Another five in the fifth solidified the win.
Imperial was actually outhit by the visitors nine to eight, but was able to capitalize better from their at-bats.
Leaders at the plate were Burrell, 2-3, with a double and single, and Zuege, 2-4 with a pair of singles.
Jaret Peterson started on the mound, striking out three, walking one and giving up three hits and three runs.
Leibbrandt and Trye Hickey pitched from the bullpen, striking out two while giving up three runs on six hits.