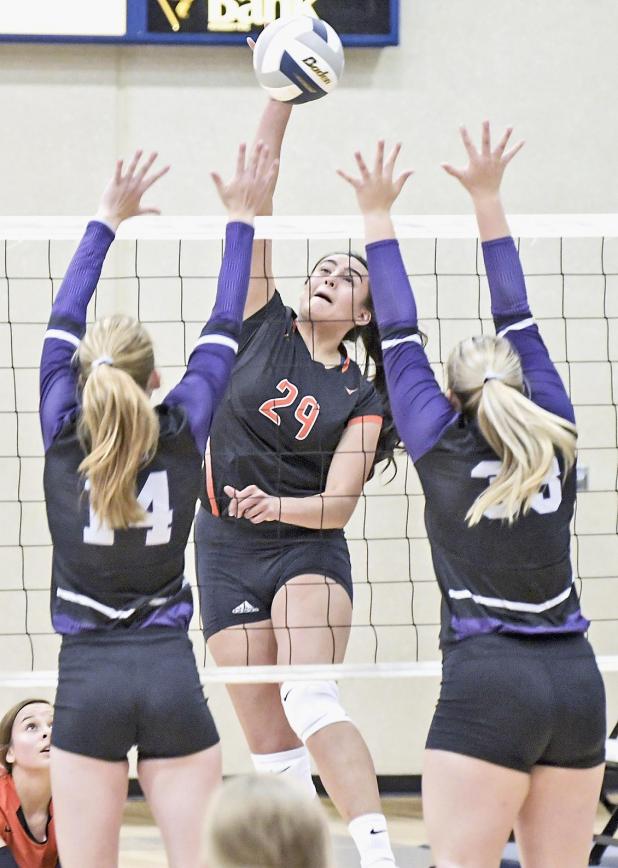 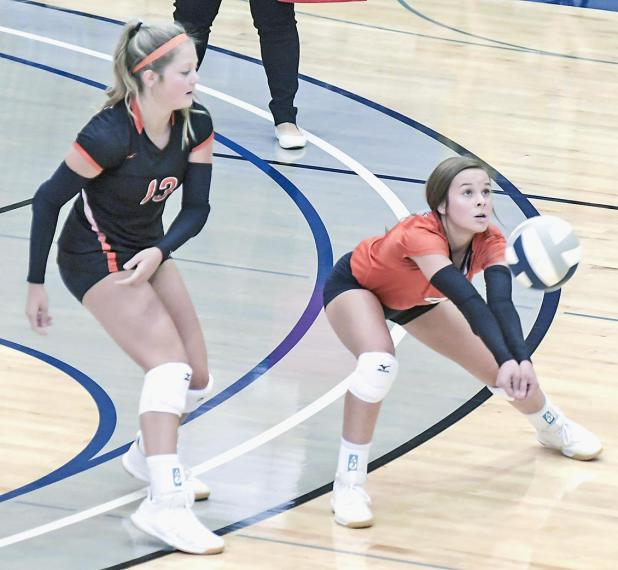 Diane Stamm | Johnson Publications
Senior libero Kora Weiss sets up for a pass against Minden as defensive specialist Chloe Dillan backs her up.

The Chase County volleyball team is continuing to look for the season’s first win after losses at a triangular in McCook and the Lexington Invitational Tournament.
CCS opened its Sept. 1 triangular with the second match of the night against Minden. The Whippets beat McCook 2-0 to begin the evening.
Minden went on a seven-point run to start the match. The Lady Longhorns battled to within two points, 7-9, before another offensive spurt by Minden. CCS lost the set 16-25.
The Lady Longhorns got off to a slightly better start in the second set, trailing 8-10 early. But after making some changes to the lineup following the season opener against Ogallala, CCS got called for three rotation penalties early in the set and had several unforced errors down the stretch of the 13-25 loss.
“Just new personnel in new spots with only a couple days to really learn or solidify it,” Coach April Lambert said.
“I think they are fundamental mistakes and a little bit of inexperience and nerves on the service line.”
Joee Clevenger had four kills and Jerzee Milner five assists to leed the Lady Longhorns.
In the final match of the evening, CCS took the first set 25-17. Taking its first lead at 9-8, CCS was able to take advantage of several Bison attack errors to get the win.
Lambert said McCook came out more organized and aggressive in the second set, which forced the Lady Longhorns into more errors.
CCS trailed through much of the second set, but was able to come back to tie the game at 20. The Lady Longhorns fought off one game point before losing 23-25.
The score stayed within three points for most of the third game. McCook stretched its advantage to 14-19 before CCS closed the gap to 21-22. But it was the Bison with the answers in the closing points of the set, a 22-25 CCS loss.
Lambert felt McCook did a good job taking advantage of CCS errors.
“They rode the emotional high of our mistakes which worked against us and in favor of their momentum,” Lambert said.
Bryn McNair paced CCS with eight kills. McNair, Milner, Chloe Dillan, Hope Brosius and Kora Weiss all had 10 or more digs. Milner also had 17 assists.
Lexington tournament
CCS traveled to Lexington Saturday for an eight-team tournament.
The Lady Longhorns opened the day with a two set loss to Broken Bow, 14-25, 13-25.
Lambert said the CCS offense struggled to fire.
“Attacking errors put us in a deficit against a good hitting team in Broken Bow,” said Lambert. “Broken Bow hits hard and we have been working on our blockers being stronger at the net, so that was a good test for them to see just how strong they need to press up there in order to not get beat.”
Gisselle Acuna paced CCS with three kills. Weiss and Alexis Richmond had 17 and 10 service receptions, respectively.
The Lady Longhorn attack improved in the team’s second match of the day against North Platte St. Pat’s, a 25-19, 16-25, 20-25 loss.
Plus, CCS servers did a better job as well, with eight aces while serving at a 95% clip. Lucy Spady notched three aces.
McNair had eight kills and Acuna totaled six kills. Acuna added six blocks. Milner dished out 22 assists. Weiss had 23 service receptions.
St. Pat’s “defense came alive and their libero was incredible on sets 2 and 3,” Lambert said. “We had a hard time getting