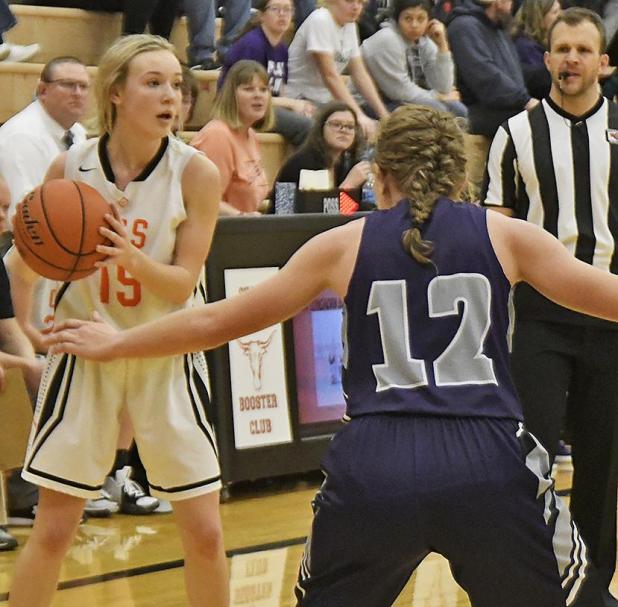 Jordan Jablonski was back in action as Chase County started its 2020 half of the season. Here, against Wray, Colorado last Thursday she looks to move the ball and finished the night with seven points. (Johnson Publications photo)

Despite of trio of defenders, Mallie McNair gets this shot off from the free throw line. It went in and gave her the new career scoring record at Chase County Schools. (Johnson Publications photo)

Lady Longhorns move to No. 8 in NSAA points

Despite a disappointing loss at Dundy Co. Stratton (DCS) last week, the Chase County girls are 7-2 on the season, and moved up to No. 8 in the Class C1 NSAA point standings.
Coach Randy Longoria said they couldn’t buy a basket in their 43-60 loss at DCS, but big wins against Wray, Colorado and Kimball put a positive spin on last week’s busy week of basketball.
Wins will be important this week as the Lady Longhorns play three more games leading up to next week’s SPVA Conference Tournament.
On Monday, Chase County was sitting No. 3 in point standings among the SPVA schools, but was just .55 of a point out of second (St. Pat’s) and just over a point behind Bridgeport, which had the highest points early in the week.
The tournament will be seeded on Wednesday after Tuesday night games this week, and the bracket will be out today (Thursday), said CCS Activities Director Troy Hauxwell, who coordinates the tourney.
The girls’ top seed will get a first round bye Monday, while the No. 2, 3 and 4 teams will play at home against the three lower seeded teams. Winners of those games Monday move to the semi-finals Jan. 23.
In between the start of the SPVA next week, Chase County had a Tuesday game vs. So. Valley, who was 3-8 Monday, will travel to Perkins County, 3-8, today (Thursday), then host 7-3 Gothenburg Friday.
Coach Longoria said Gothenburg will be a big game for Chase County.
With two games ahead of that one, he said he hadn’t had time to study the Lady Swedes yet on Monday, but based on their win percentage and point standings,  “they will be a good team.”
Gothenburg is also in Chase County’s C1-11 subdistrict. Game time Friday starts with the 4 p.m. JV game tip-off, followed by varsity.
At Perkins County Thursday, which will also feature the Pink Out games, action starts at 5 p.m. with the JV games.