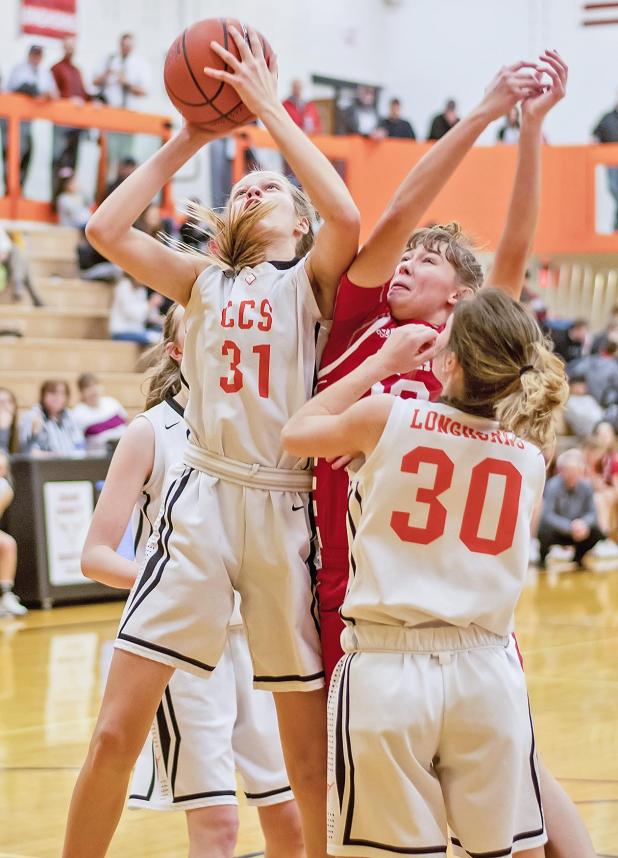 Diane Stamm | The Imperial Republican
Against some pressure, Bryn McNair goes up for two of the 12 points she scored against Yuma, Colorado on Feb. 4.

Diane Stamm | The Imperial Republican
Jerzee Milner had a good night of offense on Feb. 4, scoring a trey and field goal, which added five points to Chase County’s winning effort. 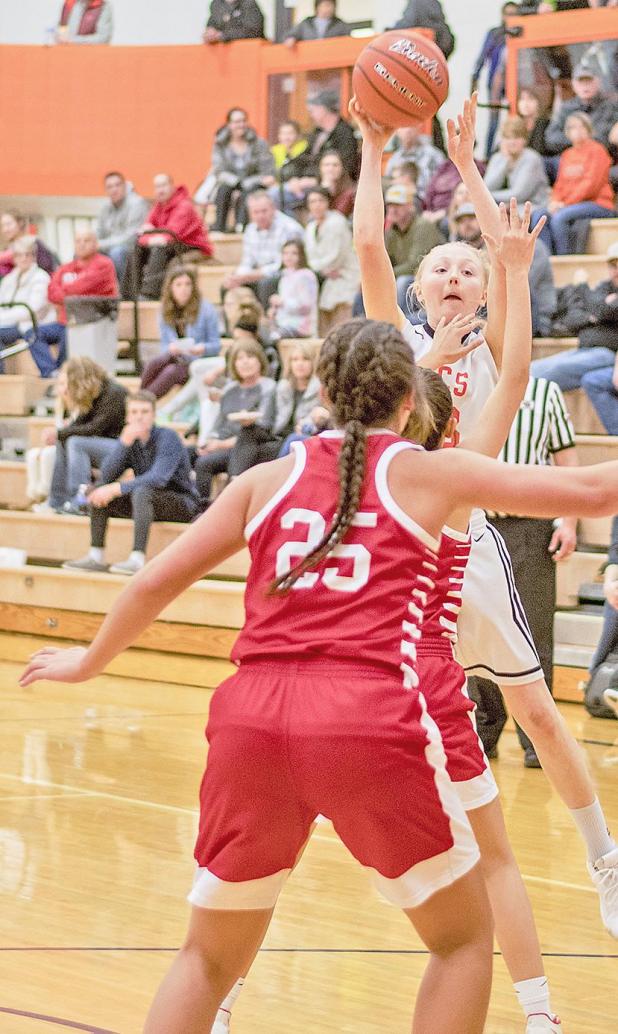 Morgan Peterson looks for an open teammate late in the game with Yuma, Colorado on Feb. 4.

Despite trailing most of the game Friday, the Lady Longhorns weren’t about to let that one slip away, especially to a team that’s always been a tough opponent.
On top of it, they didn’t want their last-second, overtime win in the Jan. 23 SPVA semi-finals to be called lucky.
So Chase County did it, winning a 46-43 game against North Platte St. Pat’s on the road.
“It was a huge win for us,” said Chase County Coach Randy Longoria.
“Regardless of the effect on our power points (CCS actually dropped from No. 8 to 9 after the game), it’s a big win for our confidence and for momentum going into subdistricts,” he said.
Chase County will be the certain top seed in next week’s C1-11 subdistrict tournament (Feb. 18 and 20), the first step to a state tournament qualification.
Although the C1-11 bracket wasn’t out early this week, seeding is based on NSAA power points, and games Tuesday will not affect where teams were sitting in the point standings Monday.
The Lady Longhorns did not have a Tuesday game this week.
Chase County, now 15-3 with 43.6111 points, is 2.5 points ahead of second seed Gothenburg, and their 11-7 record (41.1111). Hershey sits No. 3 at 6-13 (39.2632) while Cozad will be No. 4 at 4-15 (37.3684).
Chase County will face Cozad in Tuesday’s first round at North Platte High School at a 5 p.m. MT tip-off. Gothenburg and Hershey will follow at 6:30 p.m. MT
Tuesday’s winners will meet next Thursday, Feb. 20, at 6 p.m. MT, also at NPHS.
All 12 subdistrict winners, along with the four teams with the highest NSAA points, will be seeded in a 16-team district finals bracket.
The eight district finals winners on Feb. 28 qualify for the state tournament the following weekend.
Chase County has one regular season game left this Saturday, and it will be an important one.
Cambridge, 12-7, will be in town for a matchup after a one-point loss to St. Pat’s the night after Chase County’s win over the Lady Irish.
‘They’re a good team. They’ve beaten Dundy Co. (Stratton) twice,” he noted.