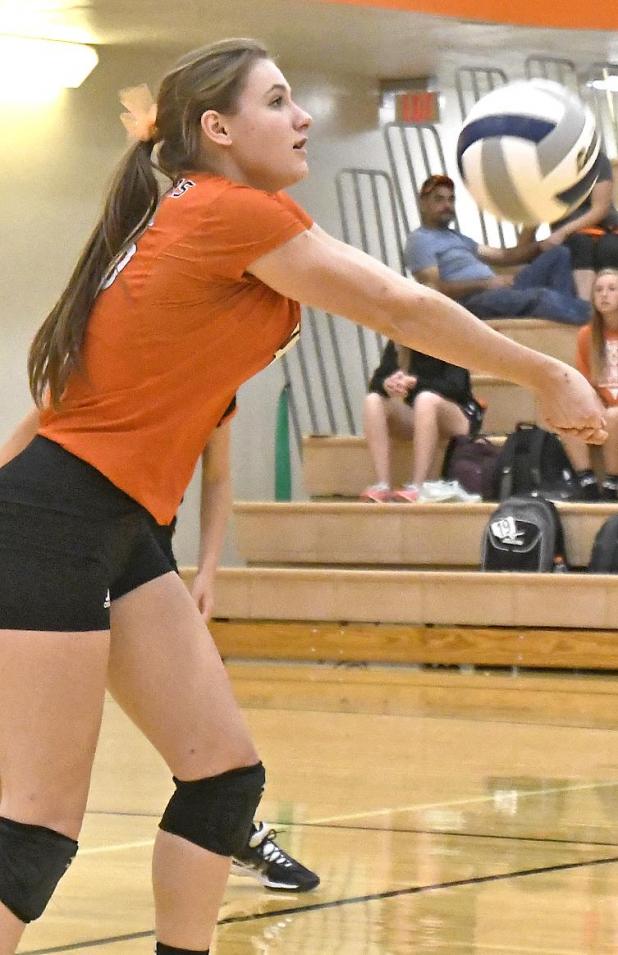 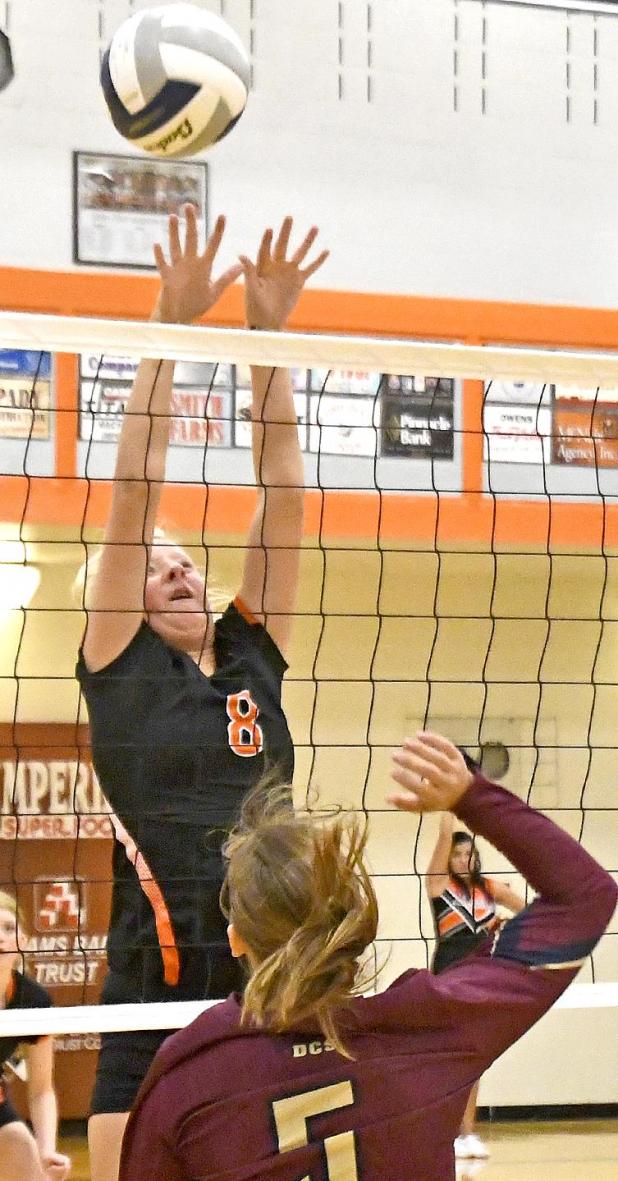 Ashley Bubak (8) saw some varsity action last Thursday at a triangular in Imperial. Here, she goes up for a block against Dundy Co. Stratton’s Sydney Reichert. (Johnson Publications photo)

In a week that included a match against a Class B opponent, a triangular and an eight-team tournament, Chase County’s varsity volleyball team  was kept on its toes.
With a 3-3 finish in the six matches last week, Coach Jodie Schuller said her team continues to work on connecting with each other.
However, they did face some salty opponents in the week’s action.
Class B Sidney was one of them.
With a 9-6 record early this week, Schuller said Sidney had much stronger hitters than Chase County’s young team when they traveled to Imperial Sept. 19. Sidney’s offense was fast and they passed the ball well, she said.
However, nine missed serves by the Lady Longhorns didn’t help the cause.
Schuller said her team is still struggling with consistent passing, and that was a factor against Sidney, too.
Both Sidney and Chase County tallied 20 kills in the match, but the Lady Red Raiders finished with a better hitting efficiency of .208 compared to Chase County’s .163.
Ragan Nickless led the Lady Longhorns at the net with eight kills, and also had two of the team’s four ace serves.
Overall at the line the team served 48-57 (84 percent). Madison Schuller was credited with 16 set assists, and Peyton Fiedler led the defense with 31 digs.
DCS/St. Francis triangular
Chase County won both matches in a triangular it hosted last Thursday, toppling both St. Francis, Kan., and Dundy Co. Stratton (DCS) in straight sets.
After winning the first set easily, Chase County fell behind St. Francis in the second but refocused and pulled out the win.
“That was a good comeback for the girls,” Schuller said.
Scores were 25-14 and 25-19.
Nickless had nine of the team’s 18 kills as the team finished with a .147 hitting efficiency compared to .121 for St. Francis.
Chase County missed just one serve in 48 attempts for a 98 percent effort which included four aces. Schuller had 14 set assists in the match.
Against DCS, scores were 25-12 and 25-19.
Compiling 19 kills, Chase County increased its hitting efficiency from the earlier match to .171, while DCS finished with a minus .015.
Nickless led the team on offense again with nine kills, while Mallie McNair added seven. Schuller had 15 set assists, and Fiedler picked up six digs.
At  the line against DCS, Chase County missed just one serve again (49-50) for another 98 percent showing. Schuller had four of the team’s five aces.
Coach Schuller said her team’s improved passing was a major factor in their performance last Thursday.
“When we pass well, we’re on,” she said.
She also noted the team’s hitting stats were up in both matches, but added that it all comes down to on-target passing. When the passing is on, it allows them to run their offense, she said.
She was also quite pleased with just two missed serves at the triangular.
Sutherland tournament
Chase County finished where they were seeded in Saturday’s Sutherland Volleyball Invitational.
Their seventh place finish followed a 1-2 showing, losing their first two matches to North Platte St. Pat’s and Sutherland, then closing out the day with a win over Dundy Co. Stratton.
At times, Coach Schuller said her team,which she describes as a “talented bunch,” looked flat on Saturday.
“We need to work more on connecting with each other,” she said. “We need to be hungry to play.”
Chase County dropped its opener to North Platte St. Pat’s, 22-25, 25-10 and 20-25.
After losing a close first set, Chase County dominated the second one, winning by a 15-point spread.
Coach Schuller was hopeful her team’s play in the second set would carry over, but at times, she said the team seemed to let up a bit.
“Volleyball is such a mental game,” she said.