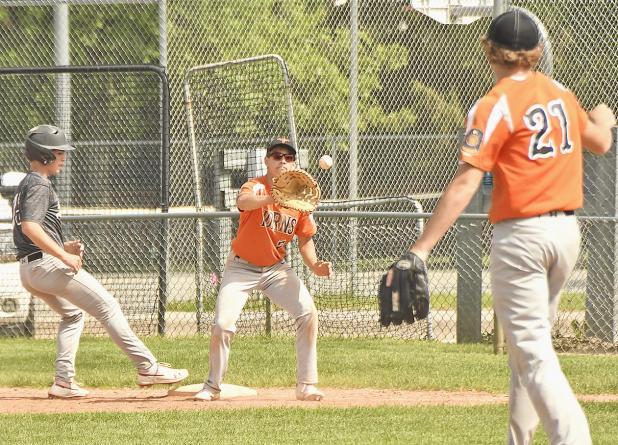 Trevor Peterson nearly catches this Broken Bow base runner Sunday as he flings the ball to first baseman Dominic Sis, but he just beat the throw. (Johnson Publications photo) 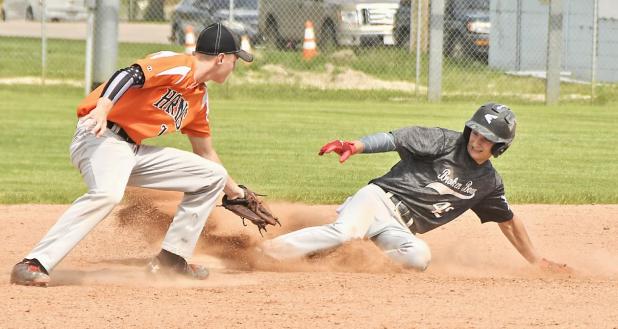 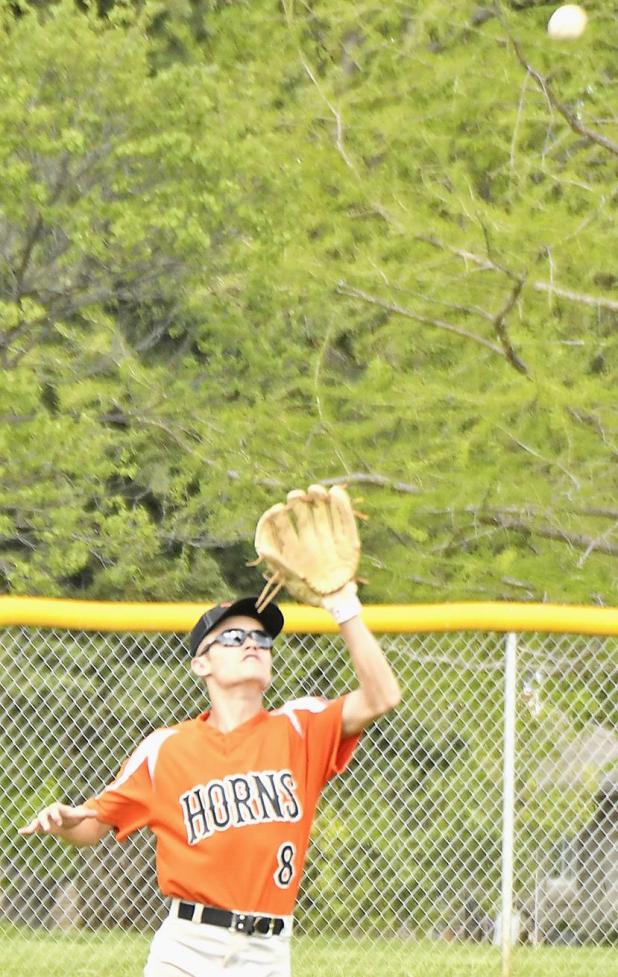 By Jan Schultz
The Imperial Republican
Despite suffering the first loss of the season, Imperial’s junior and senior Legion baseball teams had a pretty good week at 5-1.
Even with Sunday’s 12-11 loss to Broken Bow’s seniors, they still hold a 4-1 season record, while the juniors remain unbeaten at 5-0.
It was a busy week of games as the teams played six contests over five days.
Imperial vs. Broken
Bow (away)
A four-run fifth clinched a slim 6-5 win for the juniors as they opened a double-header at Broken Bow May 29.
Imperial was on the board first in the top of the first when a sac fly from cleanup hitter Dominic Sis scored Mason Nordhausen, who’d reached on a single.
Imperial tallied another run in the second after a walk scored Emmitt Zuege.
The 2-0 Imperial lead was erased in Broken Bow’s at-bat in the second. They scored three runs as Imperial battled an error-filled inning.
Imperial went scoreless in the fourth but unleashed in the fifth with four runs to lead 6-3. Broken Bow put two across in their half to pull within one, 6-5. That’s how the game would end as neither team scored again.
Imperial had nine hits, with two each from Nordhausen, Nolan Burrell and Emmitt Zuege. Tysen Lempke, Jaret Peterson and Ryan Bernhardt had one each.
Burrell started on the mound, striking out two and walking two in 2.1 innings of works. Morel Jurado and Sis came in on relief.
In a shortened five-inning game, Imperial’s seniors beat Broken Bow 11-1 in the nightcap.
After a six-run first inning, the ‘Horns didn’t look back. Trevor Peterson’s two-run homer in the third put the team’s final two runs on the board as they went home early on the 10-run rule.
Imperial finished with 14 hits in the game. Broken Bow posted five.
In addition to Peterson’s homer, the offense was led by Dominic Sis with a double and two singles. Also recording multiple hits were Ryan Bernhardt, double, single; and Lincoln Waters, Bennett Bauerle, Burrell, all with two singles. On the mound, Duncan Rector struck out seven, walked none, and gave up five hits and one run.