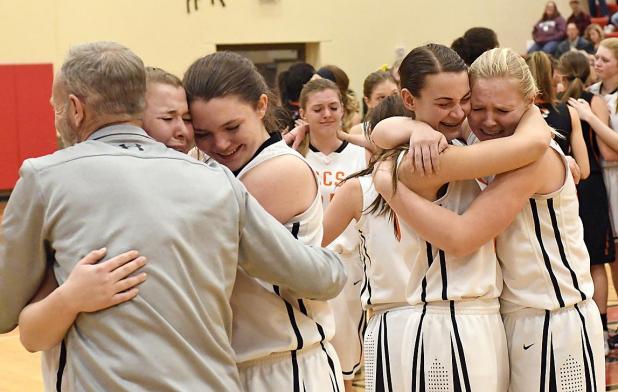 There were a few tears after the Lady Longhorns’ basketball season ended in the district final game against Mitchell on Friday. At left, Coach Mark Bottom consoles Andrea Page and Molly Luhrs, as Kadyn Milner and Kaylee Meeske share an embrace. (Johnson Publications photo) 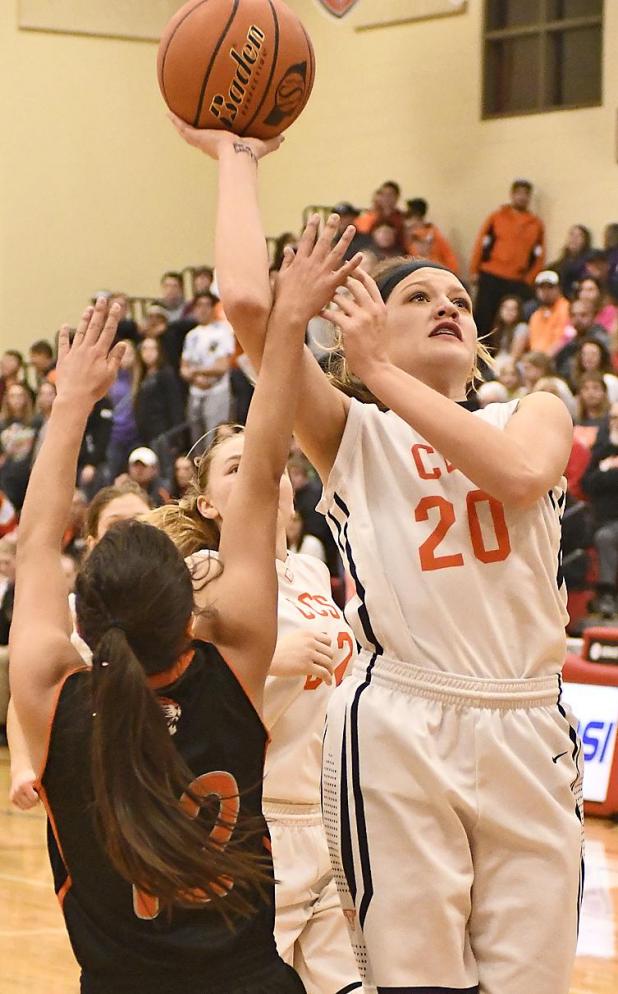 Taylin McNair used her jumping ability to get this shot up and over the hands of Mitchell’s Jori Peters. McNair led the Lady Longhorns in scoring with 12. (Johnson Publications photo)

By Jan Schultz The Imperial Republican

Even though it was the first time in 17 years the Lady Longhorns played in a district title game, Friday night’s loss didn’t make it any easier for Chase County.
“They really wanted it,” said Coach Mark Bottom.
Mitchell got in the way of a state tournament berth and continuing a successful Chase County basketball season. It would have been the first time since 1994 a Lady Longhorn team competed in Lincoln.
“I told them the sting of this loss will go away, and they need to be proud of what they did this season,” Bottom said.
“This team has raised the level for girls’ basketball here. It was a great season,” he added.
Losing 28-55 to Mitchell, who had topped the Class C1 point standings coming into Friday’s game in Sidney, was indicative of a tough night on offense for Chase County.
Coach Bottom said they defended Mitchell well and accomplished all of their goals in the game except better shooting.
Chase County defeated Mitchell’s press, went after their post player holding her to lower than average scoring and disrupted Mitchell with a strong zone press, he said.
“But, we didn’t shoot well. We just couldn’t get our offense going,” he said.
From the field, Chase County was 20 percent (9 of 44), made two of 14 three-pointers (14 percent) and hit four of nine at the line (44 percent).
And senior Taylin McNair, the team’s leading scorer, was the only one in double figures with 12 points.
It didn’t look that way after the first quarter, however.
After trailing 0-7 early, Chase County came back in the final minutes of the first quarter, helped by McNair’s two treys, to a 13-18 deficit as the quarter ended.
But Chase County’s offense went cold, as they scored just eight points total the next two quarters, falling behind 21-49 at the end of three.
That was too big a difference to make up in eight minutes.