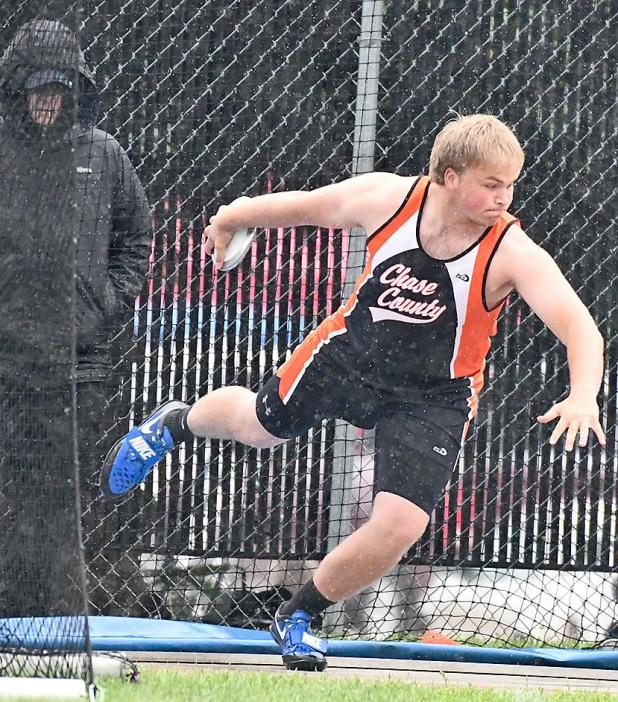 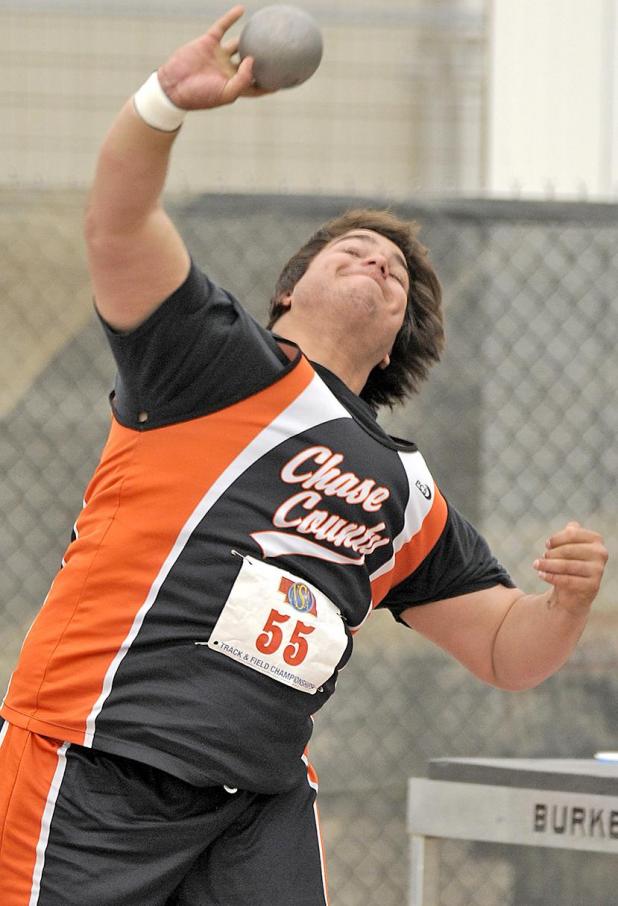 Eli Hinojosa improved his personal best at districts by a foot to take sixth in the shot put at state. (Johnson Publications photo) 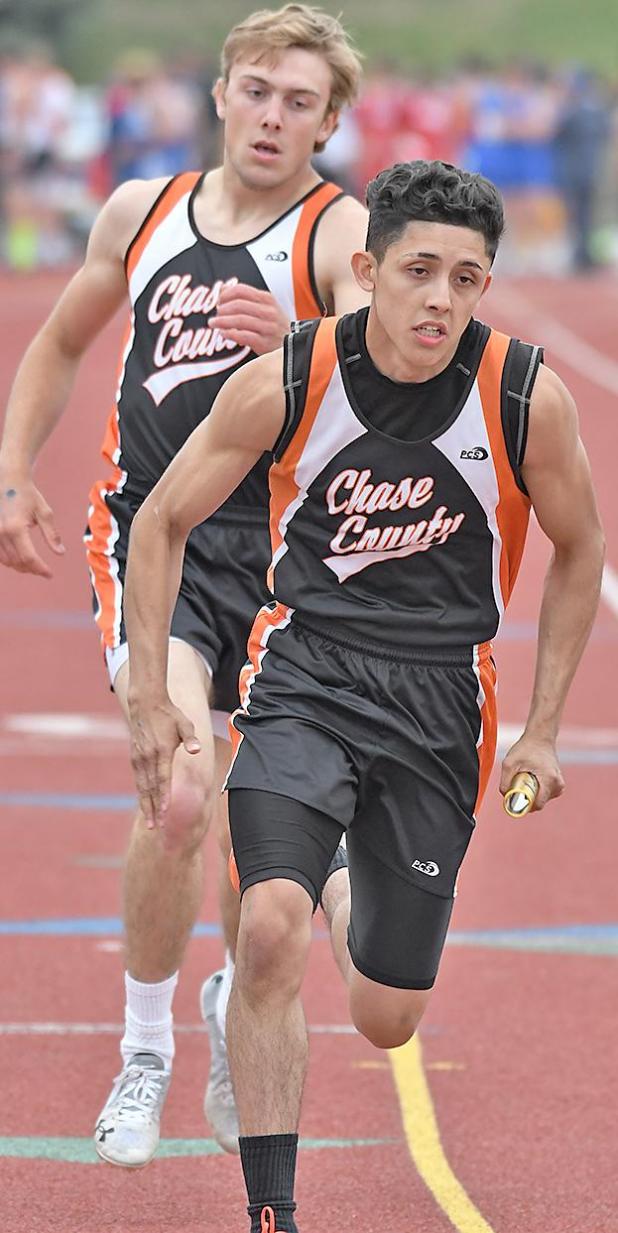 The 1600 meter relay team had Chase County’s best finish with third place. The bronze medal team is pictured at two of its exchanges, above from left, Caleb Weiss, Juan Venegas, Scott Wheeler and Francisco Barrientos, below. (Johnson Publications photos) 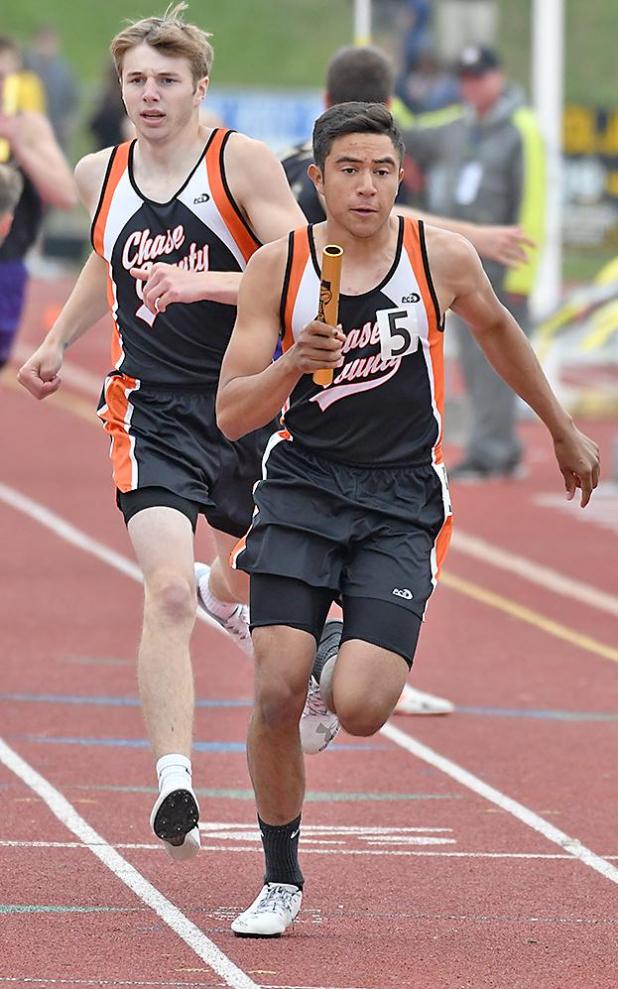 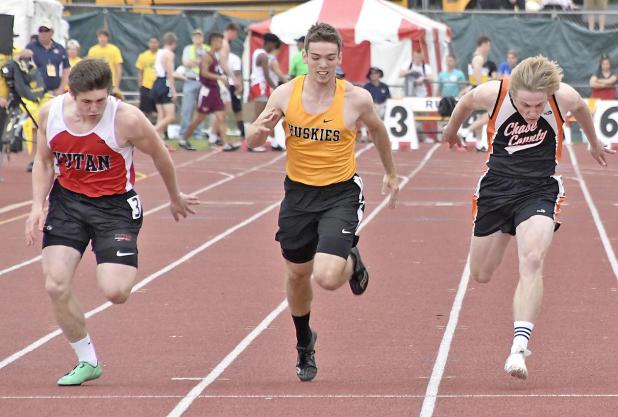 Kadin Vrbas, far right, gets the edge in his 100 meter dash preliminary, winning the heat with a time of 11.32, bettering heat runner-up Chase Perchal of Yutan, far left, and Shelby-Rising City’s Lincoln Schoenrock, who was third. In the finals, Vrbas finished sixth. (Johnson Publications photo) 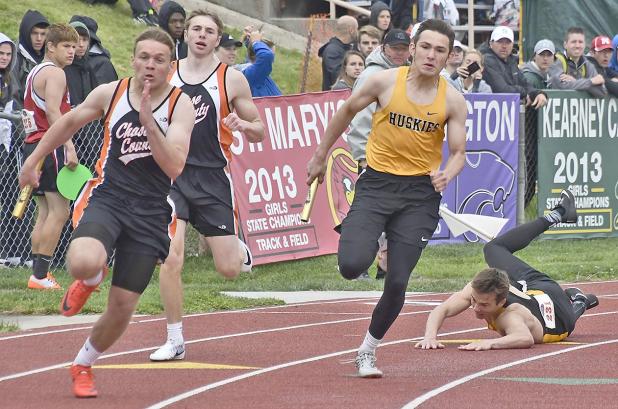 As a member of the Shelby-Rising City team goes down, Chase County maintains its composure as Scott Wheeler hands off to Chase Rowley at the second exchange in the 400 meter relay. (Johnson Publications photo)

Eight of 10 Longhorns score, lifting boys to fifth at state

It was a goal of Coach Carl Zuege to place in the top five in last week’s Class C state track meet.
That’s just what the Longhorns accomplished as eight of the 10 Chase County qualifiers scored high enough in their events to medal Friday and Saturday in Omaha for a fifth place team finish.
“We were projected in the Omaha paper to finish seventh, but I felt we had the opportunity to score points not factored in those projections,” Zuege said.
“We knew going in we wouldn’t have a bunch of event winners but would score in lots of places,” he said.
The Longhorns were just a point out of fourth, too, as Hartington-Newcastle won the Class C state title.
Finishing highest for the Longhorns was its 1600 meter relay team, running in the last event Saturday.
The team of Caleb Weiss, Juan Venegas, Scott Wheeler and Francisco Barrientos won the bronze medals with a time of 3:30.23.
“That team was in the top three (statewide) all year, and it was so good to see them finish well,” Zuege said.
All but Wheeler are seniors, and Zuege said those three graduates, like much of the senior class, will be missed next season.
“That senior class has been one of the better track classes that has come through here in a long time,” he added.
Weiss, Venegas and Barrientos represent some of the heart of that senior class, he said.
Overall, as Zuege looked over last week’s state meet performances, he said the team again showed the work ethic they exhibited all season.
“I felt like this was a team that we never had to ask to compete. They showed up to compete every day,” he said.
When it came time to perform, Zuege said, this group stood above, top to bottom, of teams that went hard and competed.
Fourth, fifth, sixth place
medals also won
Jack Bauerle claimed fourth in the discus under miserable conditions as pouring rain greeted the Class C athletes Saturday morning.
His fourth place throw of 142’5” was not a PR, but no one reached PRs that morning, Zuege said.
After poor results his first two tries, he power-threw his third attempt in the prelims which vaulted him into the finals with seven others from a field of 18.
Earning the Longhorns’ only fifth place at state, Chase County’s 400 meter relay team finished in 45.07. Mitchell, out of the same C-9 district as the Longhorns, took gold in the event.
Zuege said it’s been at least 15 years since Chase County has sent this relay to state, “so it speaks well of some of our young sprinters and how they’ve come around.”
Team members included Kadin Vrbas, Scott Wheeler, Chase Rowley and Juan Venegas.
The rest of the Chase County athletes who medaled came home with sixth place showings.
Vrbas came home with a medal in the 100 meter dash. He won his heat with a time of 11.32, then on Saturday, finished in 11.54 for sixth.
“Kadin had really come on and was healthy the end of the year and found his drive,” Zuege said.
Like most meets this season, Vrbas was first to the 10 meter line last week.
“You have to be pretty fast to place in the 100 at state,” he smiled.

To read more on boys track and other stories, please log in or subscribe to the digital edition. https://etypeservices.com/Imperial%20RepublicanID359/