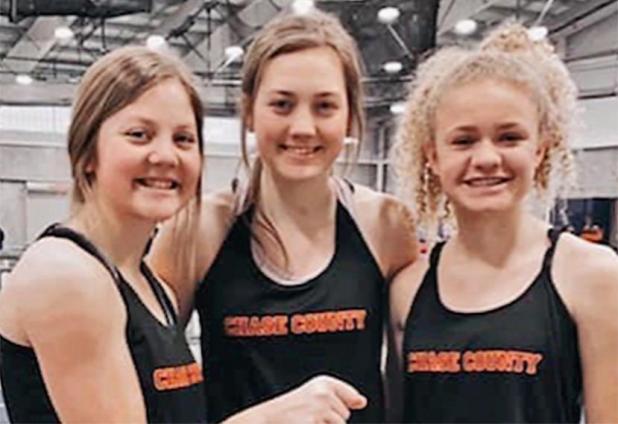 Three Chase County Schools track and field girls competed in the Nebraska Indoor Track & Field Championship Series at Concordia University in Seward on Sunday.
Kamrie Dillan, Chloe Dillan and Caelyn Long each ran in meet No. 2 of the series after also running in the first one.
The Nebraska Indoor Track & Field Championship Series consists of three meets, each including 11 events per gender
The top eight in each event are awarded points for each competition. The athlete with the most points at the conclusion of the third indoor competition will be the series champion.
Athletes in grades 9-12 are eligible to compete.
While NSAA-sanctioned track and field season hasn’t started yet, the CCS girls are competing in a club team-like atmosphere.
“You just enter all the races and events independently,” Kamrie and Chloe’s mother Terri Dillan said. “You’re not representing your school.”
The girls’ track coach at CCS, Troy Hauxwell, is the one who got the girls interested.
Since these three girls are not competing in basketball this year, Hauxwell has been working with the girls after school.
“They decided to just start working towards the track season,” Dillan said.
Hauxwell found out about some independent meets, like the one at Concordia, to give them something to work for.
The majority of competitors at the meets are from class A schools in Lincoln and Omaha, with Chase County being one of the smallest.
“It’s been a very humbling experience going against great runners from larger schools, especially having our actual track team dominate around here,” Kamrie Dillan said.
“It reminds us of why we like track to begin with, and gives us great competition to get better before the real season starts.”
Meet No. 1 results
Girls 60m dash
10—Kamrie Dillan, 8.56
11—Chloe Dillan, 8.66
200m run
8—Kamrie Dillan, 29.02
11—Chloe Dillan, 29.61
1600m run
3—Caelyn Long, 6:33.76
Meet No. 2 results
Girls 60m dash
9—Kamrie Dillan, 8.53
11—Chloe Dillan, 8.65
200m run
11—Chloe Dillan, 29.00
1600m run
9—Caelyn Long, 6:23.06
Meet No. 3 will be held this Sunday at Concordia.