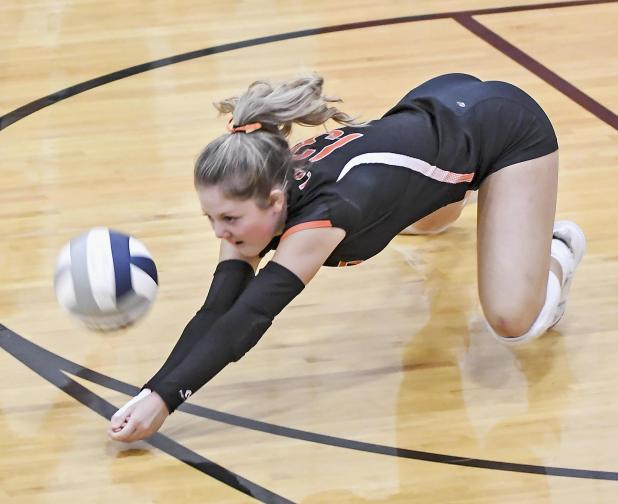 Diane Stamm | Johnson Publications
Chloe Dillan keeps her eyes on the ball as she dives for a dig in Chase County’s match against Gothenburg. 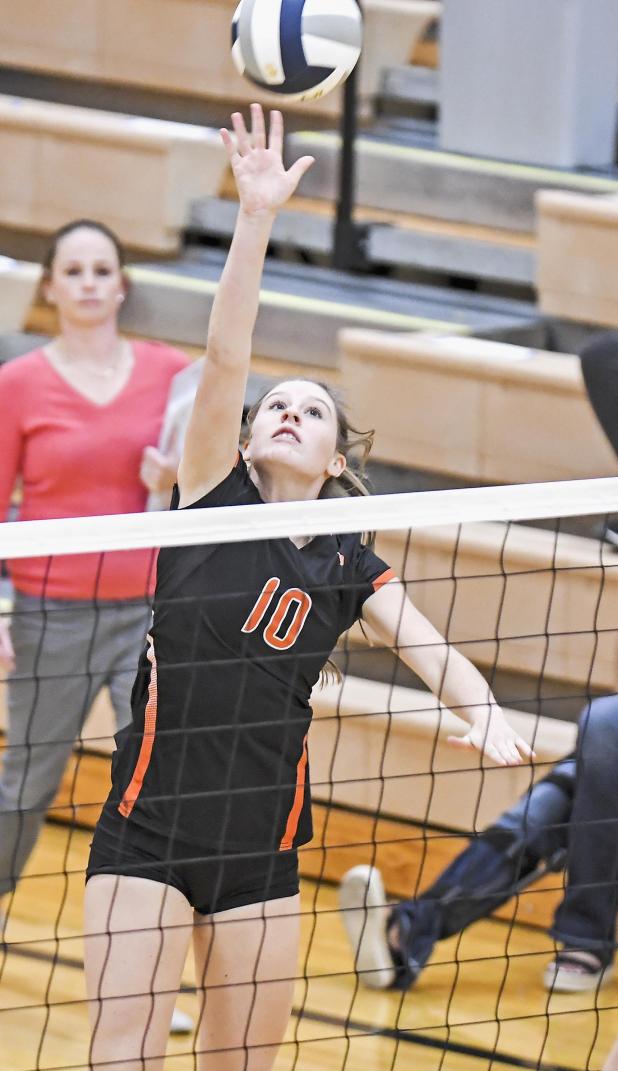 Diane Stamm | Johnson Publications
Lucy Spady tips the ball over the net in the third set of the Longhorns win over Perkins County.

Chase County added three more wins on the volleyball court last week. CCS improved to 10-11 on the season with wins over Perkins County, Sutherland and Maxwell, while falling to Gothenburg.
The loss to the Swedes was the first match of a Tuesday triangular.
Gothenburg led throughout the first set. The Longhorns rallied from a five-point deficit to pull within two points, 18-20, before losing the set 19-25.
The second set was the same. CCS cut into the Swede lead down the stretch, but fell in the set 18-25.
“Gothenburg attacked the ball well and got several kills on our defense and beat our block a few times, and we just didn’t fire back,” CCS Head Coach April Lambert said.
Bryn McNair and Kamrie Dillan had six and five kills, respectively, to lead CCS.
The Longhorns only had one service error in the match and finished with a 97.4 serving percentage. Lucy Spady and Chloe Dillan had two aces each.
“We did serve lights out,” Lambert said. “Only missing one serve in two sets is as good as you can ask for. Our serve receive also did a great job.”
Alexis Richmond had 11 digs and 17 receptions.
Lambert said CCS has been working on being aggressive on the net and on offense.
“But when we get into situations where we are having to play scrappy defense and send free balls or tips, that is never good against an aggressive team like Gothenburg,” Lambert said.
“Our setters and hitters are still working on that offensive chemistry, and once we get there, we know teams like Gothenburg are completely beatable.”
After a match off, in which Gothenburg beat Perkins County 25-18, 25-17, CCS was back on the floor to take on the Plainsmen.
The Longhorns fell behind 1-8 to start the match and slowly dug themselves out of the hole. Two aces by C. Dillan and a CCS block pulled the Longhorns to within two points, 15-17. A kill by K. Dillan tied the game at 21. CCS took a 24-23 lead on a McNair kill, but couldn’t finish off Perkins County. A kill, an ace and a block by the Plainsmen ended the set, 25-27.
Set two looked to be competitive too through the early points of the set. After being tied at 5-5, the set swung quickly into the Longhorns’ favor.
Richmond and Milner combined for five kills to give CCS some separation, 12-7. McNair added four kills of her own as the Longhorns pulled away for a 25-12 win.
CCS kept the pedal to the metal in the third set. Milner increased a 11-7 Longhorn lead to 17-7 from the service line. Kora Weiss and C. Dillan also had serving streaks to propel CCS to a 25-13 win.
McNair led CCS with 18 kills on .378 hitting. C. Dillan had four aces in the match.
Milner had 24 assists and McNair 11.
Richmond and Weiss had 15 and 14 digs, respectively, while also leading the team with 13 and 16 receptions, respectively.
Lambert said the break between matches wasn’t really tough.
“In volleyball you just have to be used to playing any time and any combination, whether it’s 9 a.m. or three games in a row,” Lambert said.
“You have to treat every game like a new opportunity and be aggressive with it. If you really love the game, it doesn’t matter when or where you play; you’re just excited for the opportunity to go again.”