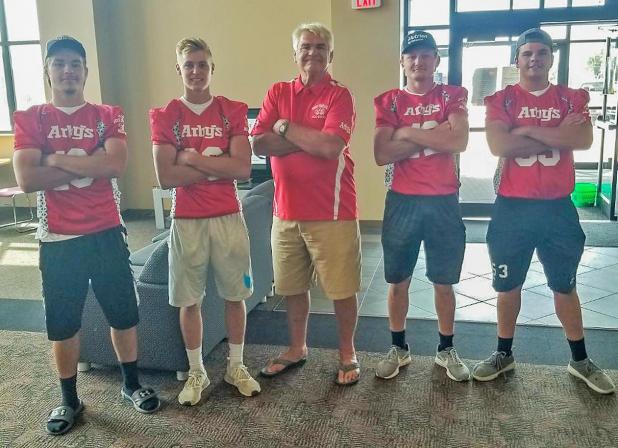 Courtesy Photo
Although they didn’t get to play the game, the CCS players picked for the West Nebraska All-Star Football Game practiced and had a good experience with their own coach from home as an assistant. The CCS group included, from left, Bennett Bauerle, Kobe Clevenger, CCS Coach Dan Lenners, Trevor Peterson and Blaine Dorn. 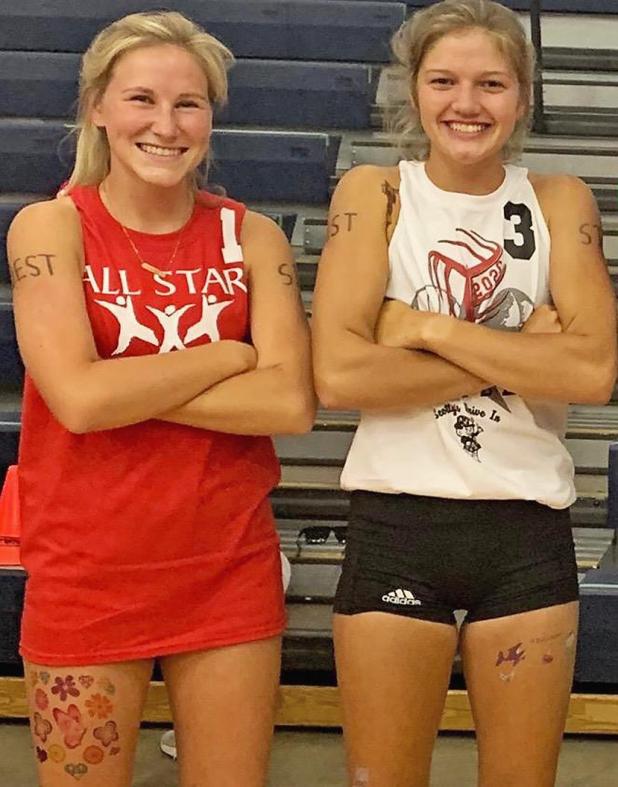 The girls were able to play, the boys weren’t.
COVID-19 infiltrated this year’s West Nebraska All-Star Games in Scottsbluff on Friday, after numerous precautions and health district directives allowed both games to be scheduled.
Then, an East Team all-star in the football game was diagnosed with COVID-19, and Friday’s football game was cancelled.
Despite the disappointment, many of the football players stayed and watched the all-star volleyball game that afternoon.
CCS graduates Mallie McNair and Sophie Spady played for the winning West Team in the 36th annual all-star match at Western Nebraska Community College’s Cougar Palace.
The West swept the East in five straight sets, 25-15, 25-17, 25-19, 25-19 and 16-14.
For the West, McNair had six kills, scored eight points and tallied 13 digs.
Spady was credited with 20 digs, and came home with sportsmanship trophy for the West, which was voted on by the West Team players and coaches.
Sidney’s Mattie Johnson was named the West’s MVP.
For the East, Maywood-Hayes Center standout Avery Johnson was chosen as both the MVP and sportsmanship trophy winner.
Football game cancelled
Dan Lenners was an assistant coach for the West Team in what was supposed to be a Friday night all-star game with top players from the western part of the state.
Despite its cancellation, Lenners said it was a good week.
“All of us coaches talked Thursday night when the possibility of no game was discussed,” Lenners said.
“We thought we had a really good team. Sometimes, you have issues with one or two players, but not with this year’s group,” he said.
“In that respect, it was a memorable week.”
CCS graduates on the West Team were Kobe Clevenger, Bennett Bauerle, Blaine Dorn and Trevor Peterson.
Lenners said it was special for him to get to coach those four former players, as well as meet some new ones. It was good for the CCS players, too, who made new friends, he said.
Head coach for the West Team was Jason Spady, an Imperial native, who Lenners coached as a Longhorn when he attended CCS.
Lenners said they’ve stayed in contact, and have seen each other at track meets over the years.
“Jason is well respected across the state,” he said.
The two have something else in common—2019 was the final seasons as high school football coaches for both men.
Lenners has retired from CCS. Spady will continue as 7-12 principal at Garden County High School in Oshkosh, but will not coach football.