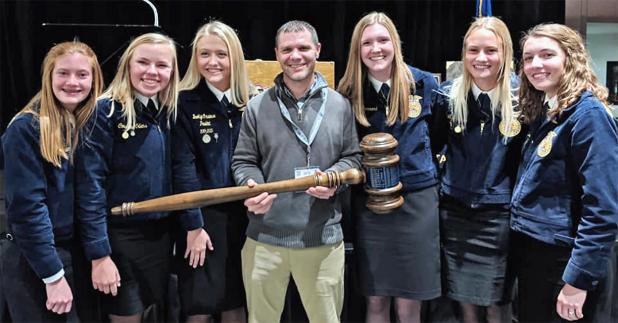 The team walked the halls at CCS on Tuesday, receiving high-fives from students. (Johnson Publications photo)

The team waits for the questioning period on the finals stage at national FFA last week. (Courtesy photo) 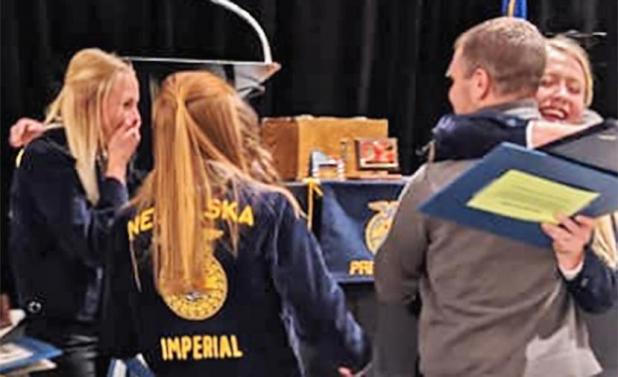 Megan Kelley, The Imperial Republican
Public performance: The national champion FFA Parliamentary Procedure team will hold a public performance on Tuesday at 6 p.m. in the school auditorium. Attendees can learn more about the contest, view a demonstration and ask questions to members about their experience. Following the demonstration there will be a reception in the school cafeteria. The monthly school board meeting will begin at 6 p.m., but will take a recess to view the demonstration and reconvene after.

They did it.
At the 92nd National FFA Convention in Indianapolis last week, an Imperial FFA team won the parliamentary procedure contest.
The team of Jozie Schilke, Brooklyn Christensen, Valerie Herbert, Lindsey Mendenhall, Courtney Odens and Alexis Richmond won the Nebraska State FFA contest in April, sending them to last week’s nationals.
“This has been the end goal from the beginning,” Coach Jeremy Vlasin said.
The three seniors—Schilke, Christensen and Herbert—watched parli pro finals at nationals as freshmen.
“We told Vlasin pretty much right away that we wanted to be up there,” they said. “So being able to wait that time and to have it come full circle, that’s really cool.”
The National FFA Parliamentary Procedure event tests students’ ability to present ideas during a business meeting.
The competition involves a six-person team—a chairman and five members—using Roberts Rules of Order Newly Revised 11th Edition.
During the demonstration, each member is required to correctly transact two motions and debate three times within the time limit.
The contest also includes a written test, oral questions and a practicum.
Overall, the team performed a demonstration three times.
There was a preliminary  round, a semi-finals round and then the finals.
“You have to advance out of each round to move on to the next one,” Vlasin said.
Second place went to Texas, third place to California and Washington took fourth.
In addition to the team receiving first place, Schilke was named Most Outstanding Member, which is based on his or her debating ability.
“That includes the points that they made and how logical they were and also how fluent they were in explaining those points,” Vlasin said. “She killed it, from debate to clarification, she earned every bit of that award.”