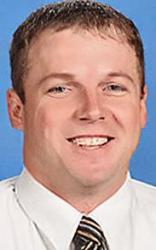 Not only will Chase County Schools have a new superintendent in the fall, a new 7-12 principal will also be on board.

Lambert informed school board members, and Lechtenberg told the CCS staff on Monday.

Lechtenberg will conclude his second year as the 7-12 principal at the end of the current school year. This was his first year in administration, moving here from the So. Valley Public School system.

At the current time, Lechtenberg said he is looking to do something different, and is not looking in the direction of education.

“I’m planning to be out of education,” he said.

Rather, he hopes to stay in the area and work in agriculture.

“I miss agriculture. I’ve been thinking about it since college, really. I’ve always been drawn to agriculture,” he said.

He said if he can find work in agriculture here, “great.” He said they have no plans of moving at this time.

Before taking CCS’s administrative post, Lechtenberg taught ag science and was the FFA advisor at So. Valley Schools. While in college at UNL, he was a state FFA officer.

He replaced former Principal Chad Scheel, who resigned in March 2018. Lechtenberg was hired the following month.

His wife, Torri, was hired at CCS the same time as her husband. She is a science and math teacher, and an assistant high school volleyball coach. Lechtenberg said he wanted to get his decision made to give the board time to find a replacement

The CCS board of education will have Lechtenberg’s formal resignation before them at their next meeting in April.

Board President Jeff Olsen said they were happy with Lechtenberg as principal, noting they had offered him a contract for the 2020-21 school year.

“He was doing a great job. He chose to go another path,” he said.

Olsen said the position is being advertised.

“We’ll see what’s out there and go from there,” he said.