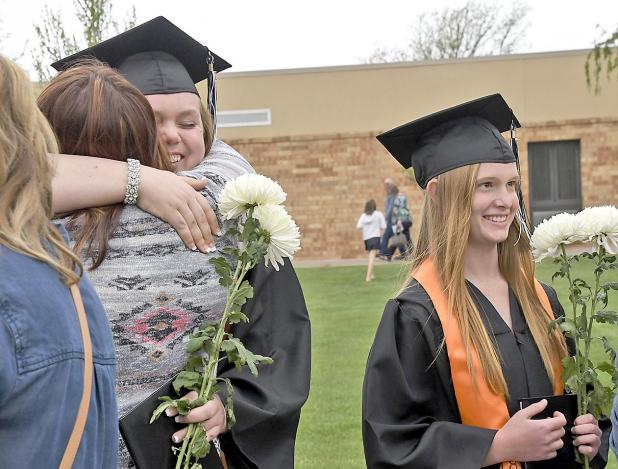 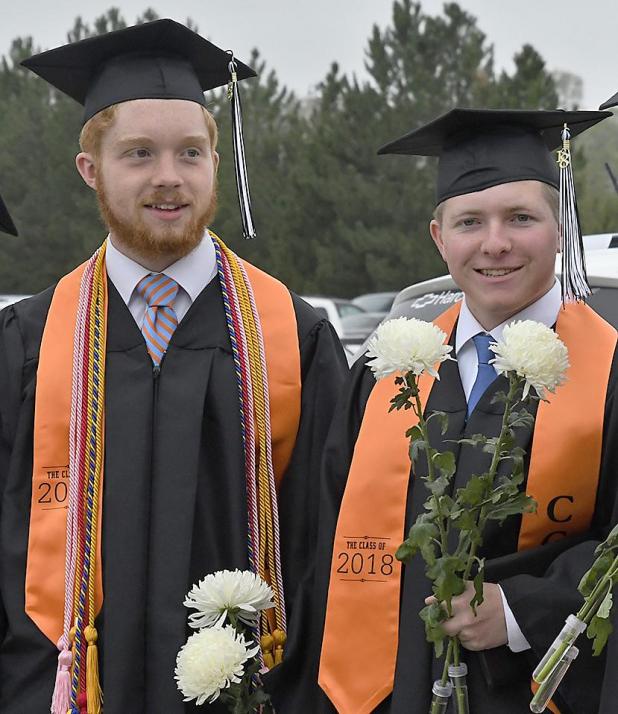 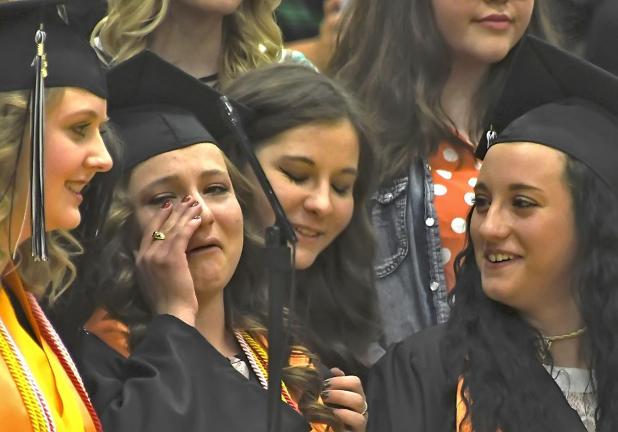 During the musical numbers by the 9th St. Singers, Peyton Fiedler couldn’t hold back the tears, as her sister, Halle, behind, gives her a hug. Fellow graduates Nicole Brown-Cravey, right, and Ryelee Christensen were also among the graduates in the show choir. (Johnson Publications photo)

Graduates in the Class of 2018 from Chase County Schools will leave their high school with some important advice they can use the rest of their lives.
Two CCS administrators encouraged the 52 graduates to use their talents as they move forward to better the lives of others.
That may not be the message young people hear today, but it’s one both Supt. Joey Lefdal and Principal Chad Scheel gave to students Saturday afternoon at CCS commencement.
Lefdal, who is leaving CCS after three years as superintendent, cited a 2016 Reebok global study that indicates 41 percent of an average human life is spent with devices of technology, such as tablets, laptops and phones.
Humans on a global average have 25,915 days to live, according to the study. Of that total, the equivalent of 10,625 days are spent on technological devices.
Meanwhile, Lefdal said, only 395 days are spent helping others and 180 exercising.
It’s his belief those numbers are backwards.
“Let’s make our family and friends more important than technology. Let’s spend more time helping others and taking better care of ourselves,” he said.
He told the graduates, “You guys have done amazing things. Don’t waste your days.”
Using a popular theme today, Principal Scheel noted superheroes when they have to make a decision will always save the innocent and let the villain escape.
Quoting the Green Arrow, “It is the strong’s duty to protect the weak,” Scheel told the graduates they should act likewise.
“The moment you walk across this stage today, you will have something that gives you advantages over those who don’t—an education,” he said.
He encouraged them to use their advantages to help those who may be weaker.
“You have the opportunity to better our world by using the education you gathered here to better those around you,” he concluded.
Valedictorians Kayla Schilke and Caine Haarberg used their time at the podium to thank the community, parents and teachers for their support over the years.
Schilke added, “The support will prepare us for the future.”
Both also congratulated their fellow graduates on the numerous accomplishments tallied in athletics, organizations, music and art.
Haarberg concluded, “I’m excited to see what the future holds for this class.”
Salutatorian Ryelee Christensen provided the invocation while Senior Class Vice President Will Kuenne delivered the benediction.
Board of education members Jeff Olsen and Willy O’Neil distributed diplomas with Principal Scheel, who’s completing his last year at CCS, too.
Musical entertainment was provided by both the CCS band and 9th St. Singers.

To view more on graduation and other stories, please log in or subscribe to the digital edition. https://etypeservices.com/Imperial%20RepublicanID359/