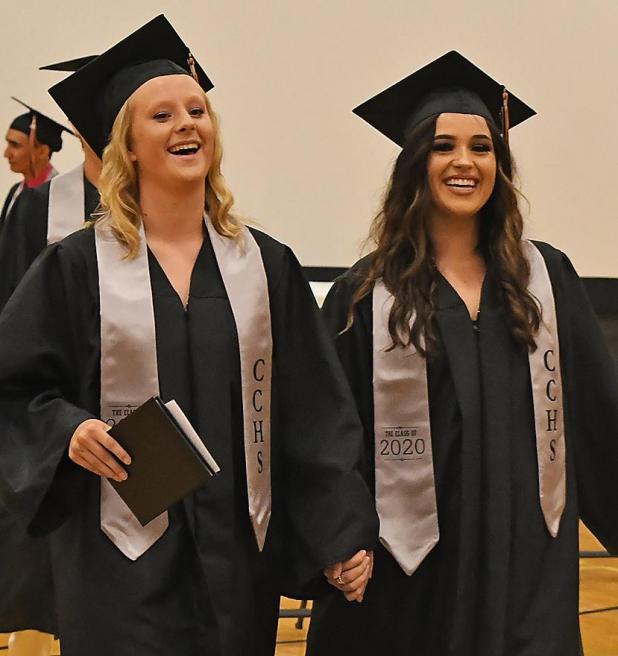 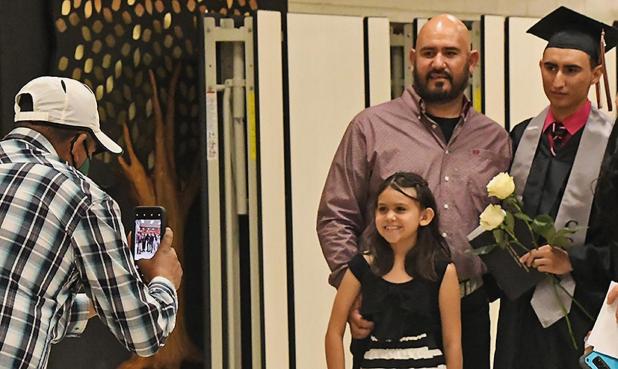 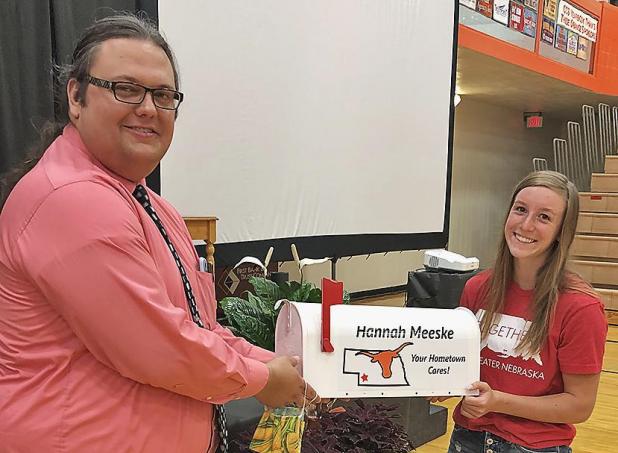 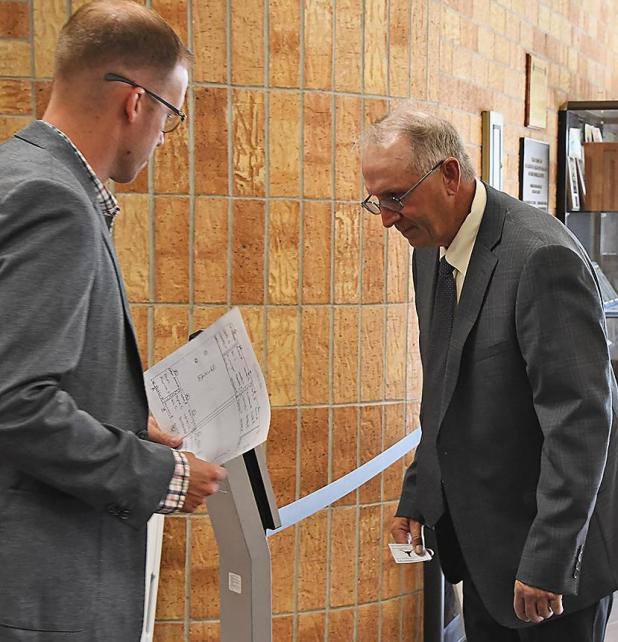 Megan Kelley | Johnson Publications
Kurt Bernhardt, right, gets his temperature checked prior to the ceremony.

Chase County Schools’ 2020 seniors returned to the building for some closure Saturday as they walked the stage and received their diplomas.
Forty-six students graduated from the Class of 2020, but only 40 walked.
Of the five missing, CCS Activities Director Troy Hauxwell said some students had already moved or started out-of-area training and were unable to make it.
“I think everything went very well with not everyone being able to make it for the practice on Friday,” Guidance Counselor Trent Herbert said.
“There were times where social distancing was hard, but overall it went well,” he added.
For some, this ceremony was a sense of closure for the seniors.
“Some of these kids hadn’t been in that building since March,” Hauxwell said.
He also observed some students before the ceremony walking the halls and simply touching their locker.
“That’s something I hadn’t thought about,” Hauxwell said. “With a normal last day of school, those kids know it’s the end. Their end was just taken away from them.”
With the new date of July 25 chosen for a belated ceremony, CCS administration found out that Rob Browning would be out of town.
Browning has accompanied the show choir during graduation and also announced the names of the graduates for almost 20 years.
“We also weren’t able to have the band or 9th Street Singers,” Herbert said.
A last-minute accompanist was able to play Pomp and Circumstance and a dismissal song, while graduates Nike Smith and Gabbi Krutsinger announced the names.
“We were really grateful for them,” Herbert said. “They stepped up and did a nice job.”
CCS 7-12 Principal Jon Lechtenberg served as emcee for the afternoon, introducing each of the speakers.
Class President Hannah Meeske welcomed all in attendance and opened the ceremony with a prayer.
Salutatorian Brooklyn Christensen encouraged her classmates to stay positive throughout the hardships of the pandemic.
“We can spend our time looking at the negatives or be a little like Isaac Newton,” she said.
Christensen went on to explain how Newton was sent home from Trinity College in Cambridge because of the plague.
“I’m not saying that you’re going to discover something as big as gravity, but what little difference you can make is important, even if it is just in your own home,” she said. “We don’t know what the future holds. Try not to lose faith.”
Valedictorian Trevor Peterson took a different approach with his speech.
“This speech is a little like our senior year: short and sweet,” he said.
Peterson highlighted accomplishments of his fellow classmates, including the national champion FFA parli pro team and school records in different sports.
“But the Class of 2020 is full of way more than just talent,” Peterson said.
“It’s full of hardworking, dedicated, kind and helpful people that are going to achieve big things; people that want to change the world around them for the better,” he said.
Despite the changes due to COVID-19, Hauxwell felt the ceremony went as smooth as could be expected.
Temperature checks were set up at the front doors, along with CCS staff directing attendees to their assigned sections.
“There were a few people who’s temperatures flagged,” Hauxwell said, “but that was mostly from the heat outside.”
Those individuals stood off to the side for a few minutes to cool off, and their temperatures were normal when rechecked.
For those unable to attend, CCS had a livestream on YouTube.
“I think Mr. Speck did a great job with the livestream,” Hauxwell said.
As of Monday morning, the link had a total of 373 views.
“Those could be ones who watched later or watched again,” Hauxwell added.
The link is still available to watch the ceremony at bit.ly/CCSGraduation2020.