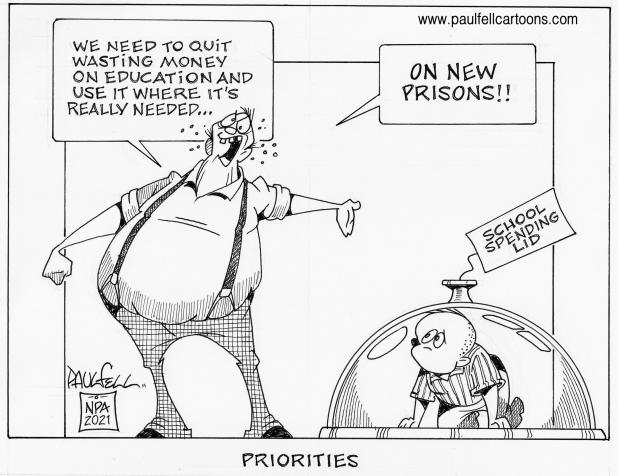 Sounds good, but how are we paying for it?

A proposed Constitutional Amendment to require the State of Nebraska to pay all classroom expenses related to the operation of public elementary and secondary schools is just a different approach to the same old problem – school finance, the complicated funding formula and the battle between big and small.
I don’t know if the sponsor, Sen. Tom Briese of Albion, ever knew the late Sen. Dan Lynch of Omaha. But I was quickly reminded of a Lynch attempt a couple decades ago to make Nebraska one school district with the state literally running public education and picking up the tab.
Great idea … but where are you going to get the money to pay for it? Aye, there’s the rub. It’s always something.
Lynch’s bill was debated by the full Legislature during one of those late- night sessions when lawmakers were rushing toward the session end and fighting to stay awake after having been fed a carbohydrate-laden dinner by the lobbyists in the senator’s lounge.
The no-nonsense Lynch, who made his living as a plumber, plunged into the matter intent on resolving the complaints about inequitable distribution of funds among different size school districts. That’s still a common gripe.
Given the lateness of the hour and the weight of other pressing matters, the measure failed to advance and hasn’t really been given serious consideration since.
To his credit, Briese’s LR 21CA is pretty straightforward. Language in the one-pager as introduced says: “A constitutional amendment to require the State of Nebraska to pay all classroom expenses, as defined by the Legislature, related to the operation of public elementary and secondary schools in this state beginning July 1, 2024.”
Obviously, Briese will have to attach some dollar estimate to give the thing traction. He has indicated the state might have to look at new or higher taxes to pick up classroom expenses. But, he said, the state already provides about $1 billion in state aid to education each year, and devotes about $400 million to credits to reduce property taxes. So, possibly, it wouldn’t require that much heavy lifting.
But there will be plenty of heavy lifting elsewhere this session as lawmakers craft and approve a $9.3 billion two-year budget.
The governor wants to: increase the property tax credit fund; provide nearly $7 million in new college scholarships; increase funding to schools by more than $100 million; and spend nearly $50 million to hold more prisoners at the Lincoln Correctional Center.
Providing full state funding of classroom education would be a fundamental change that would result in substantial property tax reduction. School districts in Nebraska levy property taxes at the local level to supplement state aid distributed through a complicated formula. Briese said the stark reality is that the failure of the state to properly fund K-12 education has created the property tax crisis.
If the measure makes it through the Legislature, appears on the ballot and wins voter approval, it would be up to lawmakers to decide how to pay for teacher salaries, books and other costs. Expenses for buildings and administrators would likely remain a local responsibility.
So, even if it passes public muster, the debate about inequities could rage on.
The rural senator, who has offered several proposals to reduce property taxes and was a key player in a tax proposal hammered out in the waning days of last year’s pandemic-delayed session, said Nebraska’s lack of support for local schools ranks it near the bottom nationally. Because rural schools get far less state aid than the large districts, the impact would be biggest in farming and ranching areas.
The chair of the Legislature’s Revenue Committee and a key proponent of property tax change, Sen. Lou Ann Linehan of Elkhorn, said it’s not fair that a small number of large school districts get the bulk of state aid and more than 200 small, rural schools get very little. She said Briese’s proposal deserves discussion.
I agree.