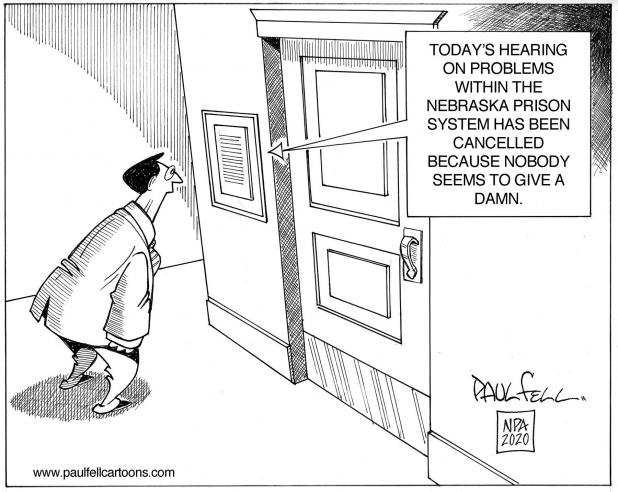 Prison Report: too many prisoners, too few staffers...

Overcrowding, understaffing, another report from state Inspector General for Prisons Doug Koebernick. Unfortunately, nothing new.
Throw in the ill effects of COVID-19 – inmates and staff quarantined and at least one inmate dead – as well as an increasing number of attacks -- inmate on inmate and inmate on staff – and things aren’t looking good at the Nebraska Department of Correctional Services. Did I mention increasing discovery of contraband?
Sounds like a broken record … but wait, there’s more! Total monthly average overtime has increased in the past three years for officers and staff. That’s the wrong direction, Koebernick cautioned. The state has serious choices to make on addressing these continuing problems.
But that seems to be an uphill battle for state lawmakers who face opposition from a “law and order” attorney general and a governor who is more than willing to veto what seem to be good ideas. Prison reform has, unfortunately, taken a back seat to property tax relief and pandemic recovery and partisan-fueled quibbling and backstabbing on the legislative floor.
Koebernick’s report said total monthly overtime hours in 2017 averaged 35,051. In 2020, that number is projected to be 42,290. From January 2018 to June 2019, the overtime for nonprotective staff grew 57%.
If that’s not enough, other problems include: turnover, assaults, suicides and suicide attempts, and double bunking. The report said the number of incidents of inmates being under the influence of K2, a synthetic marijuana, is “quite high” at the penitentiary.
While contraband issues vary from prison to prison, K2 is a significant issue at Community Corrections Center-Lincoln and the penitentiary. Illegal alcohol seems more prevalent at the penitentiary and Tecumseh. Weapons are more of a problem at Tecumseh and the penitentiary, and cellphones are found more often at the penitentiary. The Lincoln Correctional Center has seen less of a problem with contraband, Koebernick said, but recent reports indicate an increase in K2 and cellphones.
The penitentiary has responded with modified operations conditions several times because of inmate assaults and a high number of inmates under the influence of K2 (11 in one incident, 15 in another). Department Director Scott Frakes ordered a lockdown and significant contraband search at the penitentiary in early September.
During a subsequent visit, Koebernick said he heard discontent then and later among staff that parts or all of some housing units were not searched. The department would not answer questions about the search complaints, he said, for “safety and security reasons.”
“It is difficult to comprehend how not searching entire housing units is a strategy that leads to a more safe and secure facility, for staff, inmates, and ultimately the public,” Koebernick said. In the report, he suggested that searches of staff, visitors and items at each entry to a facility could be increased and the review times could be more varied.
Let’s face it. Contraband comes in from outside the facility and staff and visitors are prime suspects with staff being even more so because of frequency of trips and sometimes-lax screening of their possessions.
As to overcrowding, there are more than 5,550 inmates and the number is increasing. Seven years ago, three options to address overcrowding—including a no-cost option, a low-cost option or adding capacity through building more beds—were offered to Governor Dave Heineman. He chose the no-cost option to move inmates out of prisons in a shorter time.
If that had happened, the state would be in much better shape as far as overcrowding and staffing would have been positively impacted. As it is now, Koebernick’s report said, the problem has reached a point at which the department has hit a limit on the number of quality people who can be recruited.
It may also be impossible to adequately staff proposed new construction of 100 minimum-custody beds at the penitentiary and 384 high-security beds at the Lincoln Correctional Center. One bright spot in the report, while staff turnover increased significantly from 2010-2017, it decreased in 2018 and 2019.
A recent audit by the American Correctional Association showed restrictive housing at the penitentiary does not provide the minimum square footage in either total cell space (80 square feet) or unencumbered space (35 square feet), but a space-waiver has been granted. Koebernick has again called for an end to double bunking.
Saying a wound doesn’t exist won’t make it go away. Putting a Band-Aid on it doesn’t help. Just do the next right thing!