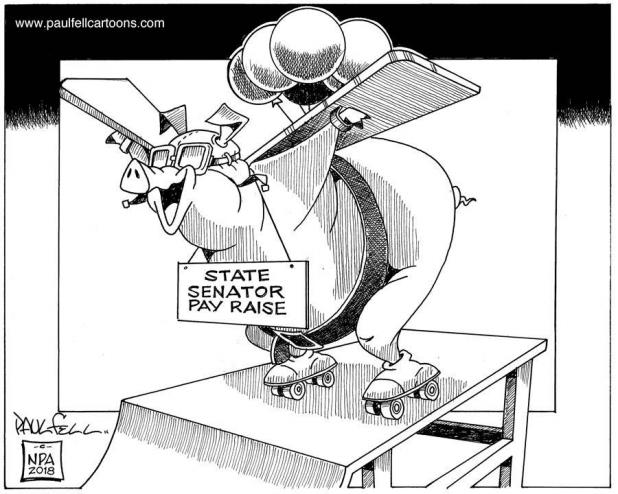 Legislative pay raise? Timing is everything

You get what you pay for.
In the case of Nebraska’s Legislature, several senators and some constituent groups say they don’t think lawmakers are getting paid enough. It’s hard to disagree since the last pay raise was 30 years ago when voters approved an increase from $400 a month to $1,000 a month.
Arizona and Nebraska are the only two states to require voter approval.
Omaha Senator Tony Vargas wants to change things by asking voters to approve an amendment to the Nebraska Constitution in the November election to raise state senators’ pay to 50 percent of the Nebraska median household income. That works out to about $28,000.
If Vargas’ proposal (LR 295CA) gets the approval of 30 senators it would be on the ballot where voters could approve that lawmakers’ salary be adjusted every two years according to U.S. Bureau of the Census income data.
The current $12,000 annual salary was set in the state constitution and last increased in 1988. There has been no adjustment for inflation, which would place a $12,000 salary in 1988 dollars at a more reasonable $25,000 today.
Vargas told the Legislature’s Executive Board that the current salary, which is augmented by a per diem or mileage when applicable, is significantly below that of states with similar costs of living. He noted that a 2017 National Conference of State Legislatures survey found that the average annual salary for a state lawmaker is approximately $35,500, excluding per diems and expenses.
He argued that a salary more tailored to the responsibilities of the office would “allow a broader range of citizens” to consider a bid for a seat in the Legislature and thereby “recruit public servants” from all income levels. Vargas said the “citizen Legislature” is not really, since “so many of our fellow Nebraskans are essentially precluded from serving in office due to this financial barrier.”
A survey by Ballotpedia said legislator’s salaries range from $104,118 in California (in addition to per diem costs to cover lodging, meals and incidentals) to New Hampshire, where senators are paid just $200 per two-year-term without per diem. New Mexico is the only state that does not pay its legislators a salary, but lawmakers do still earn a $164 per diem.
Nebraska’s per diem is $142 for senators living more than 50 miles away from the Capitol and $51 for those within the 50-mile radius.
Lawmakers in Colorado earn $30,000 a year. In Iowa it’s $25,000 and Missouri $35,915. Kansas state senators earn $88 a day.
In South Dakota it’s $6,000 with a $142 per diem. Wyoming senators earn $150 a day plus a $109 per diem.
Only one person testified in support of Vargas’ proposal.
John Hansen of the Nebraska Farmers Union said serving in the Legislature involves a significant, year-round time commitment. Senator Dan Hughes of Venango, who added his name as a sponsor of the measure, agrees. He said he is fortunate that he has family members who help run the farm.
Even Senator Mike Groene of North Platte, who admitted that he has voted against the past measures as a citizen, said he now supports the proposal. He said he has had to dip into his savings to afford the job of senator.
Senator Lydia Brasch of Bancroft has a similar story. When she is term-limited out this year, she plans to return to the workforce because she can’t afford to retire.
With the farm economy struggling and citizens clamoring for property tax relief, it’s hard to say how a proposal to more than double lawmakers’ salary will fare.
The most recent proposed increase in 2012 would have boosted their salaries to $22,500 a year, but voters overwhelmingly rejected it. Not one of Nebraska’s 93 counties supported a raise, and the proposal went down by more than a 3-to-1 ratio in many areas.
It will also be a hard sell to those who have had budgets cut—ask the folks at the University of Nebraska—and have otherwise felt the pain of difficult decisions made by lawmakers nearly every day. For many it will be a matter of conscience.
As one who has observed the legislative process for years, I do find hope in a pay increase attracting a quality and more diverse group of senators, maybe even some who can’t be “bought” by the Executive Branch or partisan politics.
If not now, when?