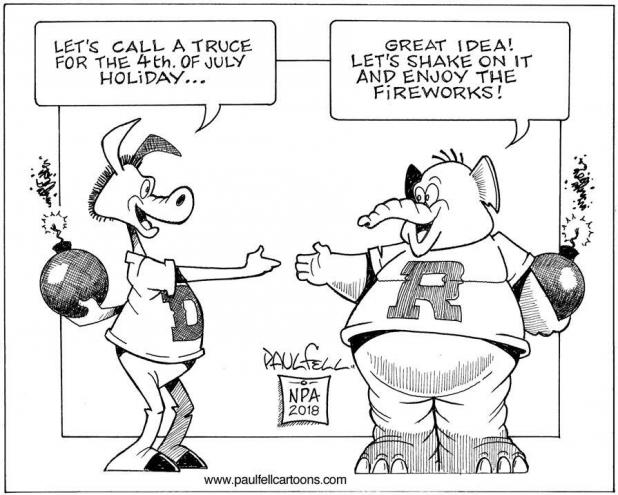 Freedom, what is it? What is it worth

The Fourth of July. Independence Day. Freedom.
“Congress shall make no law respecting an establishment of religion, or prohibiting the free exercise thereof; or abridging the freedom of speech, or of the press; or the right of the people peaceably to assemble, and to petition the government for a redress of grievances.” That’s Amendment 1.
Note that it prohibits Congress from enacting laws prohibiting the free exercise of religion, speech and the press. Yet Americans seem to be clamoring for freedom from religion, freedom from having to listen to speech with which they do not agree and freedom from the press.
Time was when funerals were peaceable assemblies, but not anymore. Petitioning government, well there’s a novel concept. Now it’s more like demanding something from government.
So, let’s all take a deep breath and think about these important freedoms. Look at the stars and stripes, the neighborhood kids parading on bikes and trikes, the bands marching in a parade or playing in the park and reflect on the First Amendment.
Think about that for which you are grateful. Make a list before you head off to the fireworks display.
Beyond the separation of church and state, I’m not sure exactly what the Freedom From Religion Foundation wants.
The 40-year-old Madison, Wisconsin-based non-profit with a staff of 22 files a lot of lawsuits and threats of lawsuits against a myriad of activity they say shouldn’t exist. They also educate the public on matters of atheism, agnosticism and nontheism. I didn’t know there was a need for that, but I’m sure I’ll be hearing from one or more of their members. Yes, they are in Nebraska, too.
Getting upset about “organized religion” doesn’t make sense to those of us who have a relationship with the God of the universe and don’t fret over denominational matters. I understand that the separation of church and state is the best thing for the church and the state.
The good news is that I don’t have to believe in what they do or don’t do. Our country gives them freedom of speech. Likewise, it gives me that same freedom of speech, or at least it used to.
This intolerance for people who don’t believe the same way and thus are shouted down or otherwise disrupted came about long before the current national administration. The ability of people with differing views to communicate depends largely on respect.
Somehow, we have lost that.
One of my favorite bloggers, Stephen Altrogge, recently wrote that “people are desperate for encouragement. For words that build up. For words that affirm them and give them strength.”
But, “There is a whole lot of death being spoken every day. Curses. Angry explosions. Criticism. Derogatory comments. Backbiting, gossip, slander, hatred, and a thousand other variations on death. We all live in a wash of constant death-speak,” he wrote.
Altrogge said that getting on social media “feels like wading through a toxic swamp. It’s a playground for people who want to vent about how angry they are. Every time I scroll through my Twitter feed, I feel gross and angry and unsettled.”
The Apostle James noted that the tongue is a two-edged sword. It cuts both ways.
Altrogge said, “Words are fire. With a few sentences, I can engulf a person, setting them ablaze and ruining them. I can douse a person in verbal gasoline and then strike a sentence. Just as a spark can destroy a forest, my words can truly destroy a person.”
Freedom of speech is the right afforded to a person to be able to speak his or her mind without fear that the government will censor or restrict what they have to say or retaliate against them.
That doesn’t mean you can say anything you want without consequences, it just means that government cannot violate your right to do so. The courts, on the other hand, are charged with making sure the speech isn’t slanderous.
As for press freedom, you’re reading this column in this newspaper. You are also free not to read this column.
What if we all focused on the words that come out of our mouths and looked for words of encouragement and understanding? Would it change the world? Slowly, but surely.
Happy Independence Day.