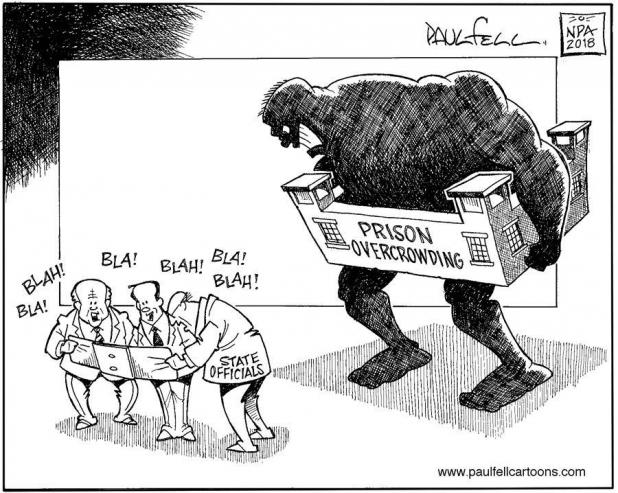 Can we talk about correcting corrections?

Talk the talk, walk the walk.
More than a handful of bills dealing with the Nebraska Department of Corrections, prison overcrowding and inmate opportunities and services have been introduced to lawmakers this year.
Let’s hope that we see more action than words.
I like the way Senator Paul Schumacher of Columbus put it in a report in the Lincoln Journal-Star.
“You talk and you talk. And you study and you study year after year, and you find out you’re going to study some more,” he said. “Because that seems to be the universal answer when you don’t have money and are unwilling to finance what you know you have to do.”
Among the talk this session are measures dealing with prison overcrowding, emergency requirements, medical release of inmates and plans to continue and possibly expand the placement of inmates in county jails.
And don’t forget the lawsuits. The American Civil Liberties Union has filed two dealing with the overcrowding question and the death penalty. The latter contends that the men currently on death row are not affected by the November 2016 ballot vote to reinstate the death penalty.
All this in the wake of a system in turmoil with several “incidents”—we used to call them riots—that have left four inmates dead, several injured. Then there’s the weekly reports of inmate-on-staff and inmate-on-inmate assaults—one of those resulting in death.
The term-limited senator said he would amend his bill before the Judiciary Committee that addresses double bunking, resulting from that inmate-on-inmate death assault. He said it was “absolutely unconscionable” to put a young man who was in prison for a fairly minor offense into a cell with an inmate who had “nothing to lose.”
The alleged killer, Patrick Schroeder, was serving a life sentence for murder. Terry Berry, Jr. was killed last year after he was put in a double-bunked cell with Schroeder at the Tecumseh State Correctional Institution.
Department Director Scott Frakes has said he plans to continue double-bunking inmates in solitary confinement despite Inspector General for Corrections Doug Koebernick’s call for him to suspend the practice out of concern it increases dangers for inmates and staff.
Another term-limited Senator, Bob Krist of Omaha, has offered a bill that would require, on July 1, that the governor declare a prison overcrowding emergency whenever the prison’s director certifies the inmate population is more than 140 percent of design capacity.
Upon certification, the director would have to provide a list of parole-eligible inmates.
The current average daily population hovers around 155 percent of design capacity. Krist—who is mounting a third-party bid for the governor’s job—said that during such an emergency, the parole board would immediately consider or reconsider inmates eligible for parole.
Governor Pete Ricketts and Attorney General Doug Peterson have said such a move raises a significant public safety concern.
Tell that to the parents of the five dead inmates or the families of the guards and inmates who have been injured because of dangerous working conditions.
Another Krist bill would authorize the director of the Department of Corrections to allow substance abuse evaluations or treatment for inmates who would benefit from such activity and to give them access to rehabilitative programming or treatment, residency or employment opportunities or participation in structured programming.
Rehabilitation instead of retribution.
That sounds almost humane, as does another Krist proposal to allow terminally ill or permanently incapacitated inmates to be considered for medical release by the department after a review of the inmate’s medical, institutional and criminal records, and additional medical evidence from examinations or investigations.
The decision would rest with the department and hinge on the inmate’s agreement to placement for medical treatment in a hospital, hospice or other housing, including his or her family’s home. If the inmate’s condition improved, or if the inmate violated conditions of the release, he or she could be returned to prison custody.
Then there’s the recommendations of the justice system oversight committee dealing with overcrowding and understaffing.
Lincoln Senator Kate Bolz said the Legislature has a duty to examine the issues and do everything it can to support correctional officers, reduce overcrowding and ensure senators are doing everything they can to address the problems.
Walking the walk. Make it so.