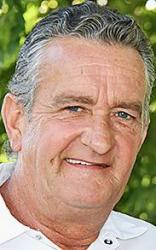 William Dean Moser was born at Beatrice, Nebraska, on March 8, 1954, to John William Moser and Irene Rose (Harms). Bill was the second born out of four children and the only boy.
As a youngster, Bill moved to Long Beach, California, where he grew up until the age of 12 when the family moved back to southeast Nebraska. He attended grade school in Dubois and high school in Pawnee City. When Bill’s folks moved to the State Line Station he moved to Lincoln for work in 1972. He was employed by Misle Chevrolet where he learned to be an auto body man which became his first love.
Shortly after moving to Lincoln, Bill met Linda Frosh through a mutual friend after he returned from a trip to California with his 1965 Corvette Convertible. She helped him rotate his tires on that 1965 Corvette and the rest is history. They were married in Imperial on April 19, 1975.
From this union five children were born, Christine, Carrie, Matthew, Katie and Jenny. Their first home was in Ogallala, NE, where Bill was employed by Brunke Body Shop.
In October of 1975, Bill and Linda moved back to Dubois in hopes to start their next chapter of life. Shortly after when both struggled to find work, they moved back to Imperial in 1976 and Bill built B & L Body Shop.
He took great pride in his body work being “straight as an arrow” but especially the paint being “smooth as glass.” He had an extreme talent and made a name for himself within the community. Bill was baptized in November of 1979 and became a member of Zion Lutheran Church.
When health issues from the painting caused him to retire from the shop, he found the very opposite occupation of recycling iron. He bought a mobile ALJON car crusher and began his next career move. He cleaned up farmsteads and recycled any and all metals. He also made sure the property was in better shape than when he showed up. Work ethic was very important to Bill. He took great pride in any and everything that he was involved in.
In Mid-September of 2002, Bill was infected with the west nile virus near Hershey resulting in meningitis. He was hospitalized in Grant for over a week. He was the first case that Cliff Colglazier treated and he always thanked him for saving his life. He worked hard to combat the effects of this disease.
On July 7, 2007 Bill suffered his first heart attack at the Frosh farmstead west of Imperial. This resulted in heart surgery in Kearney.
His health further declined when he suffered a stroke on Sept. 9, 2012, at one of the Moser’s rental houses. Eventually, due to health reasons he retired which was one of Bill’s biggest challenges he had to overcome.
After retiring, Bill suffered his second heart attack in Lincoln.
His new job after retiring became being a grandpa and full-time yard maintenance at his house and the neighbors. His attention to detail was evident in this job as well.
Bill was a very devoted man to his family. He took pride in everything that he did but especially in his children and grandchildren. Bill was a very stubborn man but he was always willing to extend a kind hand to anyone in need. Bill and Linda built a home where anyone could lay their head. To say that Bill had “adopted” children would be an understatement as he was always trying to be that fatherly figure for anyone.
Bill had many hobbies including fishing, hunting, boating, playing pool, bowling, playing the guitar and attending auctions. He could always find value in something and when many saw junk he saw treasure and a good use for it. One of his specialties was flipping cars as he used to sell them when he owned B & L Body Shop and Used Cars. With a little love and care he would take someone’s junker and turn it into reliable transportation.
Bill passed away unexpectedly, Thursday, March 5, 2020, at the Chase County Hospital, Imperial; just 3 days shy of his 66th birthday.
Bill is survived by his wife of 44 years, Linda Moser of Imperial, his five Children and seven grandchildren: Christine, Andrew, Alyssa and Abraham Davis of Imperial, Carrie and Kayanna Moser of Lincoln, Matthew, Kari, and Presley Moser of Imperial, Katie Moser of Chicago, IL, and Jenny and Kyra Moser and Bradley King of Imperial. Three sisters, Louise and Fred Kenton of Pawnee, Yvonne Wehrbein of Pawnee and Sonia Grupe of Beatrice. Along with numerous nieces, nephews, cousins and relatives.
Bill was preceded in death by his parents John and Irene Moser of Dubois.
Funeral Services were held Wednesday, March 11, 2020, 10:30 a.m. at the Zion Lutheran Church of Imperial, with Pastor David Kahle officiating. Interment will follow at Mount Hope Cemetery, Imperial.
Visitation was held Tuesday, March 10, 2020, at the funeral home in Imperial.
Online condolences may be left at liewerfuneralhome.com.
Liewer Funeral Home entrusted with arrangements.