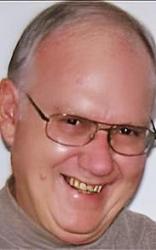 Stanley R. Loeffler, 81 of Grant, passed away Wednesday, Feb. 19, 2020, at Golden Ours Convalescent Home in Grant.
Stanley Ronald Loeffler was born on November 9, 1938 in Rocky Ford, Colorado to Henry Reinholdt Loeffler and Elma (Maier) Loeffler.
Stan grew up on farms in the Arkansas Valley and the Cheraw, Colorado areas. He graduated from Cheraw High School in 1956. He enlisted in the U.S. Air Force and received an honorable medical discharge. After several jobs in the LaJunta, Colorado area, he met and married Merle (Goodrich) Loeffler at the St. Peter’s Lutheran Church in Rocky Ford, Colorado on June 7, 1958.
He farmed in the Cheraw area for several years, receiving the “Young Farmer Award” from LaJunta Chamber of Commerce. In 1975, he sold their farm and moved to Grant. He was an officer at Farmers National Bank for several years, and then he became a salesman for Sargent Irrigation for over 25 years, where he retired in 2011.
He was a member of several organizations and a County Commissioner for two terms. He was a founding member of the Perkins County Foundation and a member of the Zion Lutheran Church.
Stan was preceded in death by his parents, Henry and Elma Loeffler; grandparents, Fredrick and Rose Loeffler, George Peter and Katherine (Erlich) Maier; brother, Allen Loeffler; sister, Sharon Loeffler; nephew, Shawn Loeffler; father and mother-in-law, William (Bill) and Nila Goodrick; brother-in-law, William Shoaf; sisters-in-law, Dorothy Roberts and Edna Shoaf.
Stan is survived by his wife, Merle, of 61 years, three children, Michael (Dana) of Paxton, Steve (Chris) of Grant, and Sonja of Kearney; eight grandchildren, Justin (Kelly) Loeffler of Cheyenne, WY, Jennifer (Jade) Reimers of Cheyenne WY, Kevin (Jesse) Loeffler of Kearney, Craig (Sarah) Loeffler of Grant, Casey (Megan) Loeffler of Manchester, NH, Elizabeth (Chelsey) Schroeder of Raleigh, NC, Jordan Loeffler of Paxton, Cheyanne Loeffler of Kearney; twelve great-grandchildren, Isabelle and Hayden Loeffler, Taven and Harper Reimers, Ethan, Audrey and William Loeffler, Wayne Loeffler, Barrett and Cassel Loeffler, Paige and Kayla Schroeder; sister, Debra Loeffler of California; sister and brother-in-law, Blaine and Virginia Clark of Colorado Springs, Colorado, along with many cousins and friends.
A memorial has been established in his memory. Condolences may be shared at bullocklongfuneralhome.com.
Funeral Services will be Monday, Feb. 24, 2020, at 10:30 am at Zion Lutheran Chruch in Grant with Pastor Ben Francisco officiating. Services will be streamed live at ziongrant.org, for those unable to attend. Burial will be in the Grant Fairview Cemetery.
Visitation is Sunday from 1 to 3 p.m. at Bullock-Long Funeral Home.
Bullock-Long Funeral Home of Grant is in charge of arrangements.