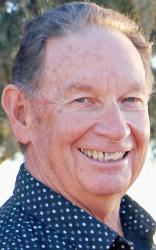 Ronald Paul Singer, 74, of Wauneta, Nebraska passed away in McCook on Sept. 4, 2020.
Ron was born on December 13, 1945 in Garnett, Kansas to Paul and Helen (Howery) Singer. He graduated from Parker High School in 1964 and attended one year at Allen County Community College before being drafted. Ron served his country in the United States Army, stationed in the Canal Zone in Panama.
Ron is survived by his loving wife, Beverlee (Regier) Singer of Wauneta; daughters Tabetha Lewis and husband Scott of Havre, Montana; Amy Singer of Alva, Oklahoma; sons Ryan Singer and wife Christina of Wichita, Kansas, Jason Singer of Ojai, California; step-daughter Michelle Goertzen of Wauneta; and step-son Tyler Thiessen and wife Natalie of Stratton; 11 grandchildren: Olivia Behrend and husband Chris; Tristen, Eric, Connor, Duncan and Marin Lewis; Makenzie and Braxton Singer; Kade, Avery and Henri Thiessen; and great-grandchildren: Boston and Lincoln Behrend; brother Charles Bevan Singer and wife Vicky of Parker, Kansas; and sister, Linda Lu Singer and husband Jeffrey of Geneseo, Kansas.
Ron is preceded in death by his father, Paul, and his mother, Helen.
Ron has been employed by the Wheeler Ranch since 2013. He loved working outdoors, especially with the cattle. Unfortunately, his health interfered with a consistent work schedule. But our heartfelt thanks go out to Rod and Marty for their graciousness and patience.
Ron and Bev were a musical duo, Bev at the piano, and Ron with his tenor voice. They brought joy to many through their singing and playing of praise songs.
Ron had been an active member of the Cross Point Church in Paola, Kansas and continued to maintain strong friendships with many in that congregation. Ron’s gift of evangelism gave him many opportunities to share his testimony with doctors, nurses, and others he would meet in the medical field as he and Bev traveled to various treatments. It was essential to him to share his strong faith in Jesus Christ with others.
Funeral Services were held Thursday morning, Sept. 10, 2020, 10:30 a.m. (CT) at the Hamlet Union Church, Hamlet, with Pastor Joshua Clark and Tyler Thiessen officiating.
Graveside services will follow at the Goodrich Cemetery, Goodrich, Kansas, on Saturday, Sept. 12, 2020, 10:30 A.M. (CT) with Full Military Honors.
A memorial has been suggested to HeartCry missionary society at heartcrymissionary.com.
Online condolences may be left at liewerfuneralhome.com.
Liewer Funeral Home of Wauneta entrusted with arrangements.