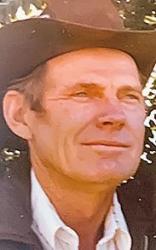 Robert Jr. Schilke was born Aug. 9, 1927, in rural Chase County, to Robert F. and Anna M. (Johnson) Schilke. RJ (as he was known) was the oldest of six boys and one girl.

RJ was involved in farming, fattening cattle and custom farming his entire life and truly loved moving dirt. He bought his first farm ground as a teenager from a neighbor with nothing more than a hand shake. He enlisted in the U.S. Army in 1946 and was honorably discharged that same year.

RJ married Twila Mae Hogsett on Sept. 17, 1950, at Zion Lutheran Church of Imperial. Twila, as well as anyone that knew RJ, was amazed at the size of his hands and wrote in the family Bible that his giant hands represented his giant heart. He could repair anything from a combine engine, to a kitchen fan, to a child’s Toy.

RJ and Twila first made their home west of Imperial and to this union two children were born: Robert R. (Bobby) and Judy K. They later built a home northeast of Imperial where they retired.

RJ passed away Monday, March 16, 2020, at the Country House Assisted Living Center in Kearney. He was 92 Years of age.

Visitation will be held Thursday, March 19, 2 -6 p.m. at the funeral home in Imperial.

A memorial has been suggested to the Schilke Family for future designation.