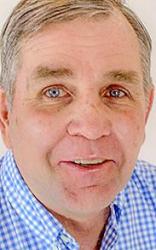 Rickey “Rick” D. Chrisman, age 64 of York, Nebraska passed peacefully into the arms of the Lord on Nov. 3, 2020 in Stromsburg. He was born April 15, 1956 in York, to Arnold and Darlene (Klemsz) Chrisman. He attended McCool Junction Public School graduating in 1974. On April 1, 1978 he was united in marriage to Gayle Foster in York.
He was confirmed on May 17, 1970 at Emmanuel Lutheran Church in York where he was a lifetime member. He served his church many years as an usher and on the Sunday School Board. He was an active member of the McCool Junction community and over the years he served on the McCool Junction School Board, Community Club, Jaycees and was a charter member of the McCool Community Improvement Foundation.
Rick farmed with his dad and brothers his entire life. He enjoyed every aspect of farming, working hard from sun-up to sun-down. Rick’s most precious time was spent loving and caring for his family. Even though he was diagnosed with Alzheimer’s in 2011, his loving heart still allowed his young grandchildren to adore him. His faith in Jesus Christ was strong from a young age and the fruit of the Spirit was evident to all who knew him and were able to enjoy his loving, joyful, kind and gentle nature.
He is survived by his wife Gayle of York; son Travis (Kelli) Chrisman and their children Lena and Henry of Wauneta; son Joshua Chrisman of York; and son Joerg (Jaga) Schreiber and their children Lelia and Clara of Rotterdam Netherlands; siblings Alan (Marla) Chrisman of McCool Junction, Terry (Kathy) Chrisman of McCool Junction, Kent (Diane) Chrisman of York; and aunt Iris Pugh of Bradshaw. He was also deeply loved by many nieces, nephews, cousins, and dear friends.
He was preceded in death by his parents; and his in-laws Earl and Joan Foster.
Funeral services were at 2:00 p.m. on Sat., Nov. 7, 2020 at Emmanuel Lutheran Church, with the Reverends Mike Neidow and Ben Kaiser officiating. Burial followed at Greenwood Cemetery in York. Rick’s service was webcast live on the church’s website at http://www.emmanuelyorkne.com/.
Visitation was from 1 to 8 p.m. on Friday at Metz Mortuary.
Memorials may be directed to the Emmanuel Lutheran Church or the family for later designation.
Condolences may be left for the family at www.metzmor tuary.com. Metz Mortuary in York is handling arrangements.