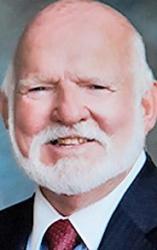 Richard S. Deems passed away peacefully on April 17, 2018 at the age of 82.
Speaker, author, business owner, professor, pastor, pilot, ranch hand, construction worker. The sparkle in his eyes could light up one face or a whole room.
As may have been said, “Dick not only marches to a different drummer, he hears an entirely different orchestra.” His positive impact on so many lives will not be forgotten. He will be greatly missed.
Deems graduated from Lincoln High School in 1954, Nebraska Wesleyan University in 1958, received his Bachelor of Divinity Degree from Garrett Theological Seminary in 1962, a Master of Arts from Northwestern University in 1964 and a Doctorate from University of Nebraska-Lincoln in 1974. He started his own successful business consulting company in 1982 and introduced the concept of professional and comprehensive outplacement to the Iowa business community. His first of 13 books, “How to Fire Your Friends,” was published in 1989.
He served as senior pastor at the Imperial United Methodist Church from 1966 to 1972 and Pastor of the Enders Church of the Brethren from 1966 to 1970. While a United Methodist pastor, Dr. Deems contributed numerous articles to church periodicals and was a frequent curriculum writer for junior high, high school and adult church curriculums.
Dr. Deems and Rev. Keith Griffith directed the first national merger between a United Brethren Church local congregation and a Methodist Church local congregation, while the two served the respective churches in Imperial. He was also instrumental in the formation of the Southwest Nebraska migrant school and the United Methodist summer leisure ministries.
He worked in higher education as an administrator at Southeast Community College in Lincoln and as a graduate faculty member at Northern Illinois University and Iowa State University. He gained wide recognition as an innovator who was looking for new, practical approaches to existing and emerging problems. He authored several hundred business related articles and numerous books on key leadership issues.
He leaves with special memories his wife of 40 years, Sandie; daughters Pam Goodrich and Terri Deems, both of Bennet, Nebraska; Cindy Molina of Weslaco, Texas; Cathy Goldman of Lincoln, Nebraska and Sonja McKiness Perez of Phoenix, Arizona; 11 grandchildren, 14 great-grandchildren, extended family, friends and strangers.
Family and friends will gather in Lincoln in June to celebrate Richard’s life.
Visit www.messingermortuary.com to sign the guestbook. Leave a message or a special memory that can be shared with others. Gifts of memorial can be made to Hospice of the Valley, www.hov.org or your favorite charity.