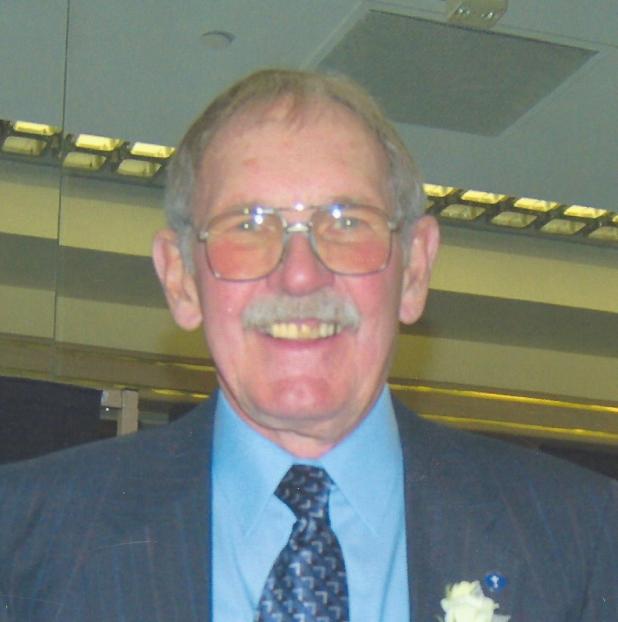 Richard Arlen “Dick” Evans was born to Alvin G. Evans and Ethel (Kingery) Evans April 3, 1933 in Farragut, Iowa. Dick entered into eternal rest with Christ His Lord and Savior March 2, 2017 at the age of 83 while a resident of Hillcrest Care Center in Wray.
Shortly after Dick’s birth his parents moved their family to a farm near Elba, a small town south of Akron, Colo. They made the family farm their home from 1934 to 1943.
The Evans family moved to Greeley where Dick entered the Greeley school system at the age of 10. He was like many students in school systems today; he passed his classes and prepared himself for college. His real love was sports and he excelled in high school to become a Greeley Star Athlete.
After high school Dick continued his education by attending Colorado State College/Cache la Poudre in Greeley. He played football his freshman year but health issues forced him to abandon his passion. He graduated in 1955 with a teaching certificate to teach almost everything but math.
Shortly after graduation he made contact with the Laird, Colo., school system. They needed a math teacher and coach. Laird Schools offered Dick the job with the understanding he would finish the credits needed to teach math. Dick’s fate was sealed. While teaching and coaching in Laird he made friends with numerous students and athletes. One of his student athletes was Dwayne Trembly who had an older sister named Marty.
Margaret L. (Marty) Trembly and Richard A. Evans were united in marriage May 20, 1956 in Laird. To this union three daughters were born, Kelly Jean in 1957 and twins Tracy Jo and Teresa Joan in 1962.
Dick moved his family several times while continuing his education, teaching and coaching. Summer schools from Kansas to California were temporary residences while he earned his Master’s in education. He taught and coached in Laird, Seibert, Idalia and Wray, Colo., making a multitude of friends and acquaintances along the way.
Dick accumulated numerous accolades during his career including 30 Years Wray Track Coach award, 20 Years Basketball Officiating Outstanding Service in Colorado and Kansas awards, Colorado Football Official Association award, Colorado Track and Field Coach Commitment award, 1998-1999 Colorado High School Coaches Association Girls Track Coach of the Year, 2000 National High School Athletic Coaches Association Coach of the Year Finalist and Class of 2006 Colorado High School Activities Association Hall of Fame.
If you were to talk to Dick he would tell you the only reason he received these awards is because of the help of good friends and partners. All the awards Dick received meant a lot to him but nothing compared to his family, friends, students and fellow teachers.
Dick became a well known math teacher with his students going on to colleges and into all facets of the workforce including engineering. He didn’t receive plaques or awards for his efforts but received something more important to him, a simple thanks.
He was a devoted Christian and relished the opportunity to work with young people through Fellowship of Christian Athletes. Dick also had numerous hobbies; operating a combine or topping beets were among them.
A few of his activities paid him but most events required him to solicit sponsors or pay the event costs from his own pocket. One of his greatest hobbies was riding his bike. One of Dick’s goals was to ride his bike the number of miles he was old on his birthday which he was able to continue into his seventies. Outside of school events the Wray Daze Elks Bicycle Race was his pride and joy.
Dick walked his oldest daughter, Kelly, down the aisle in 1975 and blessed her marriage to C. Steven Murphy. From their union Dick and Marty received three granddaughters, Shelly Ann, Shari Rae and Sheila Jean. In 1980 Dick walked Tracy down the aisle to Danny Ford; to this union Samantha Jo was born. Due to Danny passing away in 1999, Dick gave Tracy’s hand in marriage to Troy Dilka in 2001. Teresa Joan blessed her parents with 2 grandchildren, Jamie Dawn and Carey Lee. Teresa is married to Calvin Williams.
Evans was preceded in death by his parents; brother Alvin Evans; sister-in-law Phyllis Evans; son-in-law Danny Ford; nephews George Downing Jr., Larry Downing and Rodger Evans; nieces Debby Portner and Shari Camacho.
He is survived by his wife Marty; daughters Kelly (Steve) Murphy, Tracy (Troy) Dilka and Teresa (Calvin) Williams; grandchildren Shelly Hardesty and Tom Ashmore, Shari and Tommy Bolio, Sheila and Jeremy Lutz, Jamie Hines and John Bradley, Samantha Hill and Jeff Simmons, Carey and Cody Vaughn; great-grandchildren Patrick Murphy, Alea Hardesty, Ty Hardesty, Treece Hines, Aiden Hill, Gracie Lutz, Lillie Lutz, Blake Lutz, Gunnar Vaughn and Kinsley Vaughn; and a multitude of friends.
Funeral services were held on Tuesday, March 7, 2017 at the Wray High School Gymnasium in Wray, Colo. at 2 p.m. with Pastor Glen Kline officiating. Interment was held in the Clough Valley Cemetery in Cheyenne County, Kan.
Memorials will be presented to Wray Schools and Hillcrest Special Care Unit.
Schmidt-Jones Funeral Home was in charge of arrangements.