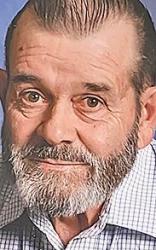 Michael Dreiling was born on July 9, 1949, in Denver, Colorado, to Christian L. and Mary (Stadler) Dreiling. Mike grew up in the Denver area graduating from Englewood High School in 1968. He entered the U.S. Navy in August 1969, and served during the Vietnam War as a machinist on the USS Brooke. He was honorably discharged in May 1971.

Mike married Cheryl I. Clay on May 22, 1971, in Englewood, Colorado, where the couple first settled. Mike and Cheryl, along with their family, moved to various locations in Southwest Nebraska until making Chase County home in 1994.

Mike held various farm positions until 1986 when he purchased the locker plant in Hayes Center. After moving to Chase County in 1994, he gained employment as a welder for Groff Ag, retiring in 2009.

Mike enjoyed being outside, hunting and fishing, especially goose hunting. He also loved to include as many family members as possible in every outdoor activity.

Mike passed away Wednesday afternoon, March 11, 2020, at his home in Imperial. Mike was 70 years of age.

Mike was preceded in death by his parents, Grandson; Michael Dreiling, and an infant grandchild. Brother-In-Law: Dan Garrison, and Sisters-in-law Jeanie Dreiling and Linda Dreiling.

A memorial has been suggested to the Dreiling Family for future designation at a later date.