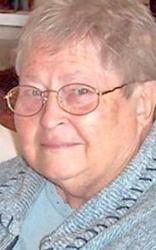 Maxine Orrell, 81, of Imperial, Nebraska, passed away May 14, 2018 at the St. Elizabeth Hospital in Lincoln. Maxine was born on Sept. 12, 1936 to Sheldon and Pauline (Boss) Kramer about three miles northeast of Culbertson on a farm. She attended various grade schools around Kansas and Nebraska while her father worked on construction projects in the area. Maxine attended Chase County High School.
Maxine met John Orrell in 1952 and they married on May 4, 1954 in Chadron. To that union three children were born.
They started their life together living in Chadron where John was employed as an electrician. The family moved from Chadron to McCook where John was employed with the Nebraska Department of Roads. From there they moved to Imperial for five years and then Ogallala for seven years until returning to McCook for twenty years until John retired from the Nebraska Department of Roads.
Once retired the couple lived in Ogallala and Lincoln.
Maxine was a loving wife, mother, grandmother, great-grandmother, sister and aunt. Maxine had a great love of family, she was a great cook, loved Precious Moments, family reunions and had lots of stories that got better over time.
Maxine was preceded in death by her parents, sister Marylyn Dalrymple and brothers Gary and Doug Kramer.
Survivors include her husband John; her daughter Kay (Steve) Davison of Ogallala, her sons David (Carla) Orrell of Gretna and John (Sharon) Orrell of Milford; her brother Terry (Leanna) Kramer of Ogallala; her sister-in-law Janice Kramer of Denver, Colorado; five grandchildren and eight great-grandchildren.
Funeral services will be held Saturday, May 19, at 10 a.m. in the Draucker Funeral Home in Ogallala with Rev. Eric Wait of New Hope Church officiating. Burial will be at Mount Hope Cemetery in Imperial at 2 p.m.
A memorial is established to the Keith/Arthur County food pantry, the Salvation Army and the Wounded Warriors Project. Condolences can be sent by signing the guest book at drauckerfuneralhome.com where the service will be live streamed for those unable to attend.
Draucker Funeral Home of Ogallala is entrusted with arrangements.