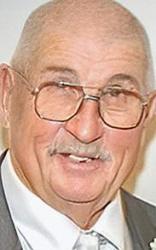 Marvin K. Colson age 81, Bartley, Nebraska passed away at his home on Friday, May 15, 2020. He was born in Hays County near Hamlet on April 16, 1939 to Omar and Letha (Stock) Colson.
The family moved to Cambridge in 1953, where he attended and graduated from Cambridge High School in 1956. Marv had enlisted in the U. S. Army before graduating from high school and later served in the Army reserve until he was honorably discharged on April 30, 1965.
On June 29, 1958 he was united in marriage to Charlene Blake in Bartley. Marv was always busy working. He worked in the oil fields for Platte Valley Drilling, worked for Nebraska Game and Parks for over 35 years and “retired” in 2009. After retirement, he worked for several area farmers driving truck: Petersen’s, David Johnson and Haag Land and Cattle, just to name a few.
Marv was active in his community. He taught EMS/First Responder class courses throughout southwest Nebraska for 20 years, was a member of the Bartley Fire and Rescue Squad, Bartley Lions Club, William Wight Post 245 American Legion of Bartley, V.F.W. Post, Masonic Lodge 228 AF&AM, and Eastern Star Dorcas Chapter 144, holding many offices.
He was also an advocate for CASA. Marv loved to go to Texas with his brothers to Wild Boar hunt, Elk hunt in Colorado and catfishing in the river. In 2009, Marv and Charlene slowed down and began to winter in Arizona and had just returned. On his birthday, Marv was surprised by a “Drive by and Honk Salute”. He was proud of his family, grandkids and great-grandchildren in all they have done. He loved being around them. Marv was a people person, if you ever met him, he knew you for life and never forgot your name.
He was preceded in death by his parents: Omar and Letha; son Gene in 2002; bother Eldon “Stubby” Colson and brother-in-law Dean Reeser.
Marv is survived by his wife Charlene of Bartley; daughter: Julie (Ivan) Hansen of Imperial; son: Brain (Amy) Colson of Phoenix, Arizona; six grandchildren; four great-grandchildren; daughter-in-law: Tanya Colson; brothers: Kenny (Sheila) Colson; Jerry (Louise) Colson both of Cambridge; sister: Connie Reeser of Pepin, Wisconsin; sister-in-law: Phyllis Colson of Lyons; aunt: Louise Stock of Dix; nieces and nephew and host of friends.
On Friday, June 5, 2020 a book signing will take place at the Lockenour-Jones Mortuary from 10 a.m. - 6 p.m. The family asks that you come to leave a memory of Marv.
An inurnment will take place at the Bartley Cemetery on Saturday, June 6, 2020 at 10:30 a.m., with military honors. With respect to social distancing, friends are welcome to join, next to their vehicles on the north side.
Friends may leave online condolences at lockenourfh.com.
Memorials may be given in Marv’s name to the Bartley Fire and Rescue or the Kemper United Methodist Church.
Lockenour-Jones entrusted with arrangements.