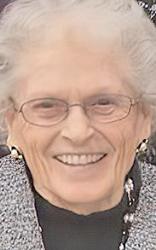 Marilyn J. Poppe, 87 of Imperial, passed away Tuesday, Dec. 18, 2018, at Imperial Manor.
Marilyn was born Aug. 5, 1931, at York, Nebraska to George and Marion (Otis) Keyes. She graduated from York High School.
On Nov. 12, 1950, Marilyn was united in marriage to Orville F. Poppe, and the couple made their home northwest of Grant, where they were involved in the Poppe family farming operation in Perkins County and Kansas.
In 1971, the family moved to Brule, where they bought the Huskie Malt Shop that Marilyn operated for several years.
In 2012, they would return to Grant to make Westview Retirement Community their home, ultimately ending up in North Platte to be closer to medical care.
Orville would precede Marilyn in death in 2015, and life would not be the same for her after that.
Most recently, Marilyn had been residing at Imperial Manor, right next door to her sister, Betty, who she shared a special bond with throughout life. While Betty was born into this world first, Marilyn would beat her home by a little less than one day.
Marilyn was a longtime member of the St. John’s Lutheran Church in Brule, where she taught Sunday School, Bible School, and was active in LWML for many years. Marilyn was a quiet and supportive presence.
She was the perfect complement to her beloved husband, Orville, who was quite gregarious. Marilyn was very thoughtful, and would often be the first to show up at a neighbor’s doorstep with a crock pot of food whenever it was needed. While she was mild-mannered, she didn’t ever shy away from the front lines when it came to kindness.
Marilyn was also an avid card player. She and Orville played countless games of cards with family and friends. Her children remember making fond memories playing with cousins while the adults were huddled around the card table having their own fun late into the evenings. Also, she loved quilting and made many quilts of all shapes and sizes for her family and friends.
Marilyn also kept a meticulous house, with everything always in its place, and never a dish to be found in the sink. While it was serious business at the time, her children look back with smiles at the memory of Marilyn sweeping Merle off with a broom before he got to come in the door from the farm.
Marilyn indeed left her mark, and she will be remembered in countless ways, from her special reminders about how to properly retrieve the mail to her unfailing warning about not leaving the freezer door open. There are 87 years worth of Marilyn’s fingerprints on the world, and they are a testament to the kind of woman that she was.
In addition to her husband, Orville, Marilyn was also preceded in death by her brothers, Lowell and Bob; and sisters Doris Harris and Ruth Wood. Marilyn’s sister, Betty Foxworthy, would join her in eternal life with Jesus just a day later.
Survivors include her son, Merle (Christine) Poppe of Grant; two daughters, Brenda (Bob) Kiolbasa of Grant, Linda (Dave) Lakey of Imperial; six grandchildren Dena Siedenburg, Shaun (Desiree’) Poppe, Scott and Eric (Emily) Lakey, Emily, and Allison Kiolbasa; five great-grandchildren; brother, Jim Keyes of Lincoln; sister, Katherine Merchant of York; brothers-in-law, LaVern (Wanda) Poppe of Grant and Eldon (Mary Ann) Poppe of Lincoln; sisters-in-law, R’Lou Keyes of Aurora, Joyce Schmitt of Cozad, and Elva Jean (Byron) Richard of Westminster, Colorado; along with many other relatives and friends.
A memorial has been established in Marilyn’s memory for later designation by the family. Condolences can be shared at bullocklongfuneralhome.com.
Services were held Saturday, Dec. 22, 2018, at 10:30 a.m. at St. John’s Lutheran Church in Brule with Rev. Jon Dickmander officiating. Burial followed in the Brule Cemetery.
Visitation was Friday, Dec. 21, 2018 from 2 to 6 p.m. at Bullock-Long Funeral Home in Grant.
Bullock-Long Funeral Home of Grant was in charge of arrangements.