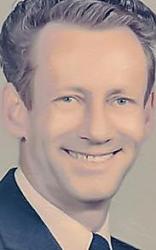 Leroy Wayne Adams was born Nov. 2, 1931, at Champion, Nebraska, to Price P. and Louise W. (Kirkpatrick) Adams. As a young man he grew up and attended school locally. Leroy was inducted into the US Army on May 14, 1952, and served during the Korean War. He was honorably discharged on April 2, 1954, and returned to Southwest Nebraska.
Leroy was employed by the City of Imperial, where he made his home. He later became the Post Master of the Champion community, a position he held for many years until retirement. Leroy enjoyed arrowhead hunting, rattle snake hunting, coin collecting, and riding his motorcycle in his younger days.
Leroy passed away Saturday, Jan. 30, 2021, at the Kearney Regional Medical Center in Kearney. He was 89 years of age.
Survivors include: best friend, Glenda Lattimer, of Imperial; Glenda’s family: Glenda’s daughter, Dorothy Lattimer (Dee Dumlap) of Imperial; Glenda’s granddaughters, Julie Pflum (Bob), of Lamar and Jennifer Struckmeyer (Del) of Holyoke, Colorado; Glenda’s grandson, Joe Quintana of Norcatur, Kansas; Glenda’s great-grandchildren,  Meagan, Oaklee, Camron, Ryker, Brandon and Austen.
Leroy was preceded in death by his parents, Price and Louise.
Memorial services will be held Friday, Feb. 5, 11 a.m. at the United Methodist Church of Imperial, with Pastor Debra Copple officiating. Inurnment will follow at the Chase Cemetery, Rural Chase County, with full military honors.
No visitation, Leroy’s wishes were for cremation.
Memorials have been suggested to the Donor’s Choice.
Liewer Funeral Home is entrusted with arrangements