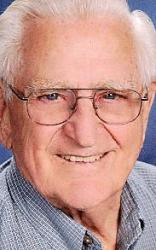 Keith Lock Arterburn was born in Holyoke, Colorado on Feb. 5, 1925 to Roley and Ruby (Lock) Arterburn. He died Dec. 26, 2020 at the home of his grandson, Chris and wife, Molly, in Ft. Collins, Colorado, where he lived since July 15, 2020.
Keith grew up on a ranch west of Imperial, Nebraska, near the Colorado border. There, he developed a love of agriculture that would guide career choices throughout his life. He attended rural schools through seventh grade before transferring to Imperial schools where he graduated from Chase County High School in 1943.
With World War II in full force, agriculture was highly valued. Keith took farm deferments for 15 months to help his parents and neighbors farm. But, after that time, his sense of duty and love of country propelled him to enter the service.
He was inducted into the Navy on Sept. 15, 1944 and was sent to bootcamp in Farragut, Idaho. From there, he went to Pearl Harbor where he trained to become a radar operator and was assigned to the U.S.S. Bataan. The Bataan served in the Pacific, spending most of its time near the coast of Japan until the war ended. After brief assignments elsewhere, he was honorably discharged from the Navy on May 17, 1946.
Following the war, Keith attended the University of Nebraska-Lincoln, where he studied vocational agriculture and prepared for a career in teaching. He graduated in 1950 and took a job at Minden High School where he met the love of his life, Hazel Ibsen. They were married Aug. 5, 1951 and moved to Gothenburg to teach at Gothenburg High. Both of their children were born in Gothenburg.
Keith taught through the spring of 1955 then worked in farm supply businesses in Gothenburg and Broken Bow before taking a job as a farm manager for the National Bank of Commerce (NBC) of Lincoln in December 1961. NBC assigned him to McCook, where the family moved in January of 1962. Representing the interests of absentee or aging owners, Keith managed as many as 60 farms at a time across southwest Nebraska, northwest Kansas, northeast Colorado and the panhandle of Nebraska. As part of the job, he also appraised and sold land. Although he retired from NBC in the early 90’s, he loved his work in real estate and maintained his realtor’s license until 2017, most recently working for Gateway Realty of McCook.
Beyond his work, Keith was an active member of the community who was especially interested in supporting youth. He served on the school board of the McCook Public Schools, the advisory board and board of directors of York College, and the board of directors of the Cornhusker Christian Children’s Home which he helped found in 1970. To assure children would have a chance to go to church, he drove the “Joy Bus” for 17 years, picking up children for Bible classes at the McCook Church of Christ. In later years, he was an active member of McCook Christian Church where he made it a mission to encourage faith among high school students.
Keith’s zest for life kept him active and vigorous far beyond normal retirement age. He was an avid fan of the Bison and Huskers who attended games and sports of every kind. He loved taking care of his home and yard, exercised to stay in shape, and traveled frequently to visit his children, grandchildren, and friends. He fought valiantly to live as long as he did because he had projects to finish and people to love. His family and all who knew him will miss his ready smile, warm hugs, wisdom, and model of faith.
Keith was preceded in death by his wife, Hazel; parents; brother, Roley Arterburn; and two sisters, Barbara Banks and Virginia Spady, as well as all of Hazel’s siblings and spouses.
He is survived by his two children Ann Morrill (and husband Bruce) of Stilwell, Kansas and David (and wife, Cindy) of Papillion; five grandchildren Ben Morrill (and wife, Stephanie), Chris Morrill (and wife, Molly), Jeff Arterburn, Kaitlyn Arterburn (and husband, Zach Norwood), and Chad Arterburn (and wife, Audra); five great-grandchildren, McKenna, Connor, Eli, Silas, and Hazel Morrill; one brother, Kermit (and wife, Charlene) of McCook; and numerous nieces and nephews.
He will be best remembered as a man of deep faith who taught and mentored young and old.
The family encourages memorials be made to York College 1125 E 8th York, NE 68467 or McCook Christian Church 507 West B St. McCook, NE 69001.
Visitation without the family present will be held Sunday, Jan. 3, 2021 from 3 to 5 p.m. at Carpenter Breland Funeral Home in McCook. The family welcomes others to say goodbye to Keith but urges everyone to use caution to protect against COVID-19.
Because of COVID restrictions, a private graveside service will be held at Ft. McPherson National Cemetery on Monday Jan. 4, 2021, with Kyle Dellevoet. The family looks forward to visiting at a public memorial service at a later date.
Carpenter Breland Funeral Home, McCook, has been entrusted with the arrangements. Please visit our website at www.carpenterbreland.com to sign the online guestbook for the family.