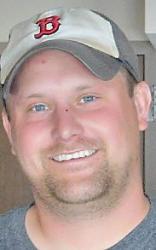 Justin Borowski, 31 of Grant, passed away July 5, 2019, at the Good Samaritan Hospital in Kearney.
Justin was born April 7, 1988, in Ogallala to Joseph and Sally (Pelster) Borowski. He graduated from Perkins County High School with the class of 2007.
Justin, known as “Gutin” or “J-Bone” to many, attended UNK where he studied education and, perhaps more notably, was able to conquer the capricious and storied foe, Mike Tyson, at the end of Nintendo’s Punch-Out... twice. This accomplishment was met with deserved fanfare and jealousy among his friends. In addition, his architectural fortitude for creating elaborate blanket forts made him a local legend.
After soaking up college life and making life-long memories with friends in his beloved second hometown of Kearney, he returned home to Grant, where he enjoyed farming with his dad and grandpa, frequently cooking dinners for his mom and dad, and coaching little league baseball.
Justin was funny, spontaneous and had a good heart, albeit a stubborn one at times. His smile was contagious, and when he laughed, the world seemed to laugh with him. He loved to plan “brother weekends” with his brothers Chad and Nathan, where they would hike, attend sporting events and bond. Justin was an inexhaustible Favreian-Packers and Huskers fan, and served as the Commissioner of his own Fantasy Football league. Winner of the Fantasy Football Championship would receive the coveted Bobby Newcombe Award, which initially was a trophy forged of satire and random stuff that Justin got at Goodwill.
Justin had a heart for animals and people, especially kids and the elderly. While in college he worked with many people who were in the twilight of their life at a nursing home in Kearney, and he often spoke of how gratifying that work was. Justin also thoroughly enjoyed a mission trip with his uncle Kim, where he helped provide eye exams and prescription glasses to the less fortunate in Peru. Being a child at heart, Justin had a way of connecting with children, especially his niece and nephews, the sons of his friend Mitch and the baseball teams he coached. His warm presence within his community will be dearly missed.
Sometimes the brightest burning stars are the shortest lasting. Justin shoe-horned a great deal of life into his years; his family and loved ones will no doubt be comforted by the many good memories that are left in his wake, as well as the distinct hope found in Jesus. As in all lives, there are trials and troubles. To borrow from Simon & Garfunkel, the evening has fallen hard, and pain is all around, may Jesus be like a bridge over troubled waters.
Justin was preceded in death by his maternal grandparents, Leonard and Christine Pelster; uncle Kelly Kirkpatrick; aunt Jean Pelster; cousin Craig Baxter; and his dog Jack.
Survivors include his parents, Joe and Sally Borowski of Grant; his brothers, Chad (Stacey) Borowski of Brookings, South Dakota, Nathan (Kati) Borowski of Carbondale, Colorado; nieces and nephews Annabelle, Manny, Zeke and one niece on the way, who Justin was determined to nickname “Skip;” grandparents Dan (Mary Sue) Borowski of Grant; his dogs Charlie and Calvin; along with several aunts, uncles, other relatives and friends.
In lieu of flowers, a memorial has been established in Justin’s memory. Condolences may be shared at bullocklongfuneralhome.com.
Mass of Christian Burial will be on Saturday, July 13, 2019, at 10:30 a.m. at Our Mother of Sorrows Catholic Church in Grant with Father Thomas Bush as celebrant. Burial will be in the Grant Fairview Cemetery in Grant.
Visitation will be on Friday from 1 to 5 p.m. at the Bullock-Long Funeral Home in Grant. Rosary will be recited on Friday at 7 p.m. at Our Mother of Sorrows Catholic Church in Grant.
Bullock-Long Funeral Home of Grant is in charge of arrangements.