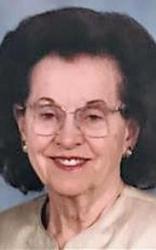 Joyce Salsman, 86, of Grant, passed on peacefully into her heavenly home during the early hours of May 25, 2019, at Golden Ours Convalescent Home in Grant, Nebraska.
Beulah Joyce Salsman was born to Jack and Reva (Cox) Barry on April 8, 1933, in Bladen, Nebraska. Joyce grew up in Grant and graduated from Perkins County High School in 1950. While in high school, she met and dated Jim Salsman, the only love of her life, and waited for him during the time he was in the Air Force. After a long distance courtship, Jim and Joyce were married on April 1, 1951, in the Grant United Methodist Church. They made a home on their farm south of Grant. Joyce worked in Grant as a secretary until their marriage was blessed with three children, Rick, Merry, and Ron.
Joyce was a member of the Grant United Methodist Church and Eastern Star and participated in a Dale Carnegie Public Speaking Mastery Course where she garnered top honors. She served long terms on the Chase and Perkins County Election Boards. She was passionate about fitness, always making time for a long walk every day.
Along with being proud of her performance at the Dale Carnegie course, Jim was always impressed at how fearless she was when it came to flying across the country with him on their way to another Flying Farmer’s event. Together, they logged over 1,000 hours in Jim’s plane. She also enjoyed attending many Husker and Grant sporting events.
Joyce found the most creative outlet as she devoted her life to her children and her husband on the farm. She loved to cook for two, or twenty, just so long as everyone felt loved and cared for, and had a piece of her famous pie. She would even surprise her family with their favorite cakes for a special occasion or no occasion at all — banana creme pie for Rick, cherry pie for Merry and chocolate meringue pie for Ron and Jim.
As their grandchildren arrived, she delighted in showering them with her love and attention. Hosting them for long summer visits, Joyce would wake them with the aroma of her homemade pancakes and syrup. They’d spend the days making memories around this town she so loved. Days with her grandchildren often ended with homemade oatmeal raisin and snickerdoodle cookies.
Her family thrived under her steady care. They always came first. Joyce gave them all she had and countless hours of unwavering support.
Joyce was diagnosed with dementia and entered Golden Ours Convalescent Home in January 2015. Jim remained by her side, demonstrating the same love and attention that is a hallmark of his family. Joyce confidently relied upon Jim’s genuine protection and care as he diligently communicated with medical staff and family. He monitored her condition daily. Joyce’s family is deeply grateful for the gentle care she received in Grant during this difficult time.
Joyce is preceded in death by her parents, Jack and Reva; sister JoAnn (Jerry) O’Connor of Elsie; sister Vona (Gerald) Ourada of Grant; brother Jack Barry of Grant; father-in-law and mother-in-law J.I. and May Salsman of Imperial; brother-in-law and sister-in-law Arnold and Evelyn Kirkegaard of Aurora, Colorado; and brother-in-law and sister-in-law Charley and Doralyn Salsman of Grant.
She is survived by husband Jim Salsman of Grant; brother Roger (Bonnie) Barry of Omaha; brother Ron (Sandy) Barry of Santa Anna, California; sister-in-law Rosie Barry of Grant; son Rick (Kathy) Salsman of Grant; daughter Merry (Mike) Zoellner of Lincoln; son Ron (Julie) Salsman of York; grandchildren Danny Salsman of Grant, Michael (Abby) Zoellner of Omaha, Kaitlyn Zoellner of Lincoln, Abbie (Jeff) Neujahr of Lexington, Ryan Salsman of Lincoln; great-grandchildren Molly, Charlie, Finn and baby Zoellner of Omaha; Hank and baby Neujahr of Lexington; many nieces and nephews and their families.
Memorials are suggested to the Perkins County Senior Center and the Golden Ours Convalescent Home. Condolences may be shared at bullocklongfuneralhome.com.
Services were held on Wednesday, May 29, 2019, at 2 p.m. at the Grant United Methodist Church. Burial was in the Grant Fairview Cemetery.
Visitation was held Tuesday, May 28, 2019, from 1 p.m. until 6 p.m. at the Bullock-Long Funeral Home in Grant.
Bullock-Long Funeral Home in Grant is in charge of arrangements.