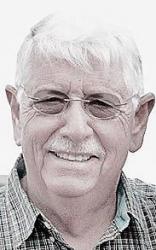 John Wayne Brandt, a longtime Ogallala, Nebraska resident and KOGA Radio broadcaster and salesman, passed away on Tuesday, July 14, 2020, at the age of 76. For the past year, John waged a courageous battle with stage-four pancreatic cancer, maintaining his signature optimism throughout.
John was born on July 11, 1944, in Hays, Kansas, to John B. and Laverna Brandt, the eldest of three children. Since childhood, John was fascinated with radio and liked to spend his time being around people and talking with them.
His mother remembered him bringing home report cards which often said, “Johnny talks too much.” But, where his teacher may have found fault, he found a career. John spent his youth in Superior, graduating from high school in 1963. He remained in contact with many of his high school classmates, attending class reunions throughout his life.
After high school, John attended college at Fairbury, but soon found himself back in Superior. In 1965, John was drafted into the US Army and trained as a Pershing missile specialist at Fort Sill, Oklahoma. After an honorable discharge, he chose to move to Ogallala, and began work as a grocery sacker at Sixth Street grocery store. Later, he found a job working as the night auditor at the Holiday Inn.
One day, John was sitting on the curb in front of his house cleaning the rims on his car tires when one of the owners of KOGA pulled up to the curb in his car and said to him, “Why don’t you quit fooling around and come work for me?” His next choice was the beginning of his decades-long career, serving the area through broadcasting. Since Dec. 15, 1969, John enjoyed over 50-years of on-air work, remote broadcasts, hosting a morning show, and selling radio advertising to businesses across western Nebraska and eastern Colorado.
A fixture at many local county fairs, John’s entertaining interviews with 4-H kids and his enthusiastically-supportive style will be missed. Generations of listeners learned about local and national perspectives on politics, news and health through the morning radio show “Midwest Opinions.”
Throughout his career, these venues afforded John the opportunity to interview countless community members, entertainers, celebrities, and politicians.
John was always an energetic and happy person, who never had a bad day, even through his battle with cancer. If his day was bad or he was in pain, there were no complaints. He was made for his job and continued to sell advertising and talk on the radio up to as recently as two weeks before his death.
John was a dedicated father and husband. He married his first wife, Barbara Brown, in 1970 and together they raised three children, Suzi, Johanna and Jonathan, in Ogallala.
As a member of the Berean Church of Ogallala, John served as a Sunday school teacher and treasurer. He remained steadfast in his Christian faith throughout his life, especially in recent months. His constant faith in Christ sustained him throughout the difficulties of his illness.
In 1996, John married Kami DeCamp in Las Vegas, Nevada. John and Kami enjoyed 24 years of marriage, traveling and visiting family and friends across the country.
A lover of travel, John’s favorite place to visit was always Las Vegas. His goal wasn’t always to win money or experience the shows. It was, in the end, about the people from all over the world who would find themselves next to him at a Blackjack table to be “interviewed” by him.
Many years of traveling and fun at his lake home in Brady, with family and friends were also treasured memories of his. However, Ogallala remained his home for over 50 years.
Left to mourn his passing are his wife, Kami (DeCamp) Brandt of Ogallala; daughters Suzi (Aaron) Dexter of Thornton, Colorado, Johanna (Corban) Heinis of North Platte; son Jonathan (Mimi) Brandt of Kearney; sister, Joyce Samson of York; brother, Jim (Faith) Brandt of Colorado Springs, Colorado; aunt, Marylou Hartzog of Ogallala; uncle, Glenn Hageman of Denver, Colorado; 10 grandchildren, Chelsi (Sean) Howard of North Platte, Arianna Simpson of North Platte, Reggie (Trenton) Martinez of North Platte, Jacob and Logan Dexter of Thornton, Colorado; Elliana Alexandria and Alliyah Suzanne Iona Deaver of North Platte,  Jonas, August, and Dahlia Brandt of Kearney; and four great-grandchildren, Luca Candon Wade Wells of North Platte, Maddison Mae Howard of North Platte, Bellamy Marie and Aubriella Noelle Martinez of North Platte, a nephew, Jay Nelson of York; two nieces, Jill (Randy) Shaw of Crete, and Jackie (Clay) Bittinger of Henderson; sister-in-law, Kressy (Ross) Ristine and nephew, Blake Ristine, of Gothenburg; as well as many extended family members, countless friends and a multitude of devoted radio listeners.
He is preceded in death by parents, Laverna and John B. Brandt; uncle Wayne E. Hageman; aunt, Bernice Turner; grandparents, Florence and Arley E. Hageman and James A. and Anna M. Brandt; brother-in-law, David Samson; and one grandchild, Candon John Heinis.
A register book signing was held from 9 a.m.-6 p.m., with family greeting friends from 4-6 p.m., Tuesday, July 21, 2020 at the Draucker Funeral Home Chapel in Ogallala.
A funeral service was held at 2 p.m., Wednesday, July 22, 2020 in the New Hope Church in Ogallala with Rev. John Engbrecht of the Imperial Berean Church in Imperial and George Robison.
Burial was held in the Ash Hollow Cemetery with Military Honors from the Keith County Honor Guard and the United States Army Funeral Honors Team.
In lieu of flowers, memorials are suggested to the Keith County 4-H and Lusgarten Foundation for Pancreatic Cancer Research.
Online condolences may be left by clicking the Share a Memory or the Tribute Wall Button by going to www.drauckerfh.com.
Draucker Funeral Home of Ogallala has been entrusted with arrangements.