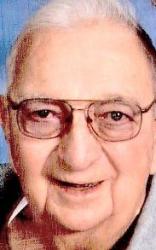 Jack Blaine Weber passed away at his home in Imperial, Nebraska on Aug. 29, 2018. He was 89 years of age.
Jack was born to John and Mary (Lemon) Weber of Maxwell on June 29, 1929 and grew up on the Haythorn Ranch north of Maxwell.
He graduated from Maxwell High School in 1947 then joined the United States Air Force in 1949 and saw service in Korea and Vietnam, plus numerous other duty stations until he retired in 1973.
Jack married Catherine (Cathy) Simons of Merriman in 1950 and the couple raised six children on various Air Force bases in the U.S. and Europe.
Jack and Cathy met in 1948 in Cathy’s hometown of Merriman. Jack was in town with his sister Barbara visiting their aunt and uncle. Jack had danced all night with another girl. At the end of the night Jack approached Cathy and asked if he could walk her home.
Cathy thought, well this crazy guy danced with another girl all night and now he wants to walk me home. She asked him about the other girl, Jack replied, “What girl? That girl over there? That’s my sister!” Jack loved to dance and Cathy always said he was a “beautiful dancer.” Jack and Cathy would have celebrated their 68th wedding anniversary this December.
“Our Grandpa taught us everything we know about fishing, he taught us to laugh more, work harder and smile brighter. He was always willing to listen to the goofy stories we had. Learning from him was always one of those times we would stay quiet and absorb what he was saying. We’ll remember your lessons grandpa. We won’t forget them,” written by Kyle Weber, grandson, and believed by all of Jack’s grandchildren.
Jack was preceded in death by his parents, his niece Kris Sukraw, nephew Ricky Joe Gutherless, grandson Kendrick Blaine Weber and great-grandson Koda Johnson.
Jack is survived by Catherine, his bride of 67 years; Connie (Bob) Westbrook of Arnold, David (Christine) Weber of Franktown, Colorado, Pamela (Scott) Diehl of Ormond Beach, Florida, Donna (John) Tucker of Lincoln, Mary (Kirk) Wilson of Imperial and Tracy (Pete) Dallas of Albuquerque, New Mexico; sister, Barbara Gutherless of Brady; brother-in-law, Andy Simons of Omaha; sisters-in-law Alma Gordon of Salina, Kansas, Stella (Jack) Nash of Cassville, Missouri, 29 grandchildren, 34 great-grandchildren and four great-great-grandchildren  plus numerous nephews and nieces.
Visitation was held from 2 to 6 p.m. Wednesday, Sept. 5, at Liewer Funeral Home in Imperial.
A Rosary was recited on Wednesday, Sept. 5, beginning at 7 p.m. at St. Patrick’s Catholic Church in Imperial with Father Lothar Gilde leading.
Mass of Christian Burial was held at 10 a.m. Thursday, Sept. 6, at St. Patrick’s Catholic Church in Imperial with Father Lothar Gilde celebrating.
Cremation will follow services and an inurnment service will be held on Friday, Sept. 7, at 11 a.m. CT at Fort McPherson National Cemetery in Maxwell with full military honors.
A memorial has been established to the Disabled American Veterans (DAV).
Online condolences may be left at liewerfuneralhome.com.
Liewer Funeral Home is entrusted with arrangements.