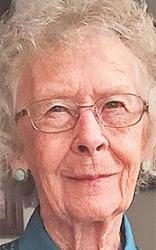 Iris Ann Large was born on Dec. 13, 1932, to Everett and Jessie (Rathbun) Large, in Hayes County, Nebraska. She passed away unexpectedly on Oct. 4, 2019, at her home in Lincoln, New Mexico.
She attended Estelle, the rock schoolhouse, in Hayes County through the seventh grade, and graduated from Wauneta High School at the age of 16 in 1949.
She continued her education at McCook Junior College and CSCE in Greeley, Colorado. She taught two terms in rural grade schools and also did substitute teaching.
On Dec. 30, 1950, she married Jerry Fanning. Iris and Jerry had three daughters: Terri Ann, Sherrie Lee and Ginger Eileen. They farmed in the Blanche area for many years, and then moved to Hayes County where Iris grew up. Iris moved to Imperial in 2007.
She leaves behind her brothers Richard L. (Charlotte) Large of Lincoln, Marvin Large of Imperial; sister Peggy (Bernard) Christner of Rapid City, South Dakota; daughters, Terri (Arnold) Bernatchy of DeForest, Wisconsin, Sherrie (Cedric) McDaniel of Wauneta, and Ginger (Winston) Moore of Lincoln, New Mexico; seven grandchildren Angela (Bernatchy) Buchanan, Alecia (Bernatchy) Gottlob, Traci (Bernatchy) LeDuc, Eric McDaniel, Carrie (McDaniel) Terryberry, Jake McDaniel, and Staci (Moore) Guerrero; 22 great-grandchildren; and three  great-great-grandchildren; many nieces and nephews, and a host of friends.
Iris was preceded in death by her parents, Everett and Jessie Large; and sister-in-law, Arlene Large.
Iris was a member of the Blanche and Wauneta United Methodist Churches, and taught Sunday and Bible School for many years. She held offices at the Blanche Methodist Church, and was active in all aspects of the Church and the Blanche community.
Iris was a member of the Women of Wauneta Investment Club, the Wauneta Golf Club and the Hayes County Historical Society. Over the years, she was employed at Hoff and Walgren Supermarkets in Wauneta, the Lanz Veterinary Office, the Hamlet Post Office and did contract bookkeeping.
She was an EMT with the Wauneta Ambulance crew. Iris enjoyed square dancing, golf, crafts, art, sewing, playing the piano and keyboard, farming, ranching, hunting for arrow heads, putting puzzles together and spending time with family. She loved her grandkids and great-grandkids, and spent many hours doing craft projects with them, and even playing hide and seek.
She was a caring, thoughtful, and generous mother and grandmother; full of energy and fun. She will be missed by all who knew this wonderful, gracious lady.
Funeral Services will be held Monday, Oct. 14, 2019, 10:30 a.m. at the United Methodist Church of Imperial, with Pastor Kent Griffen and Rev. Melody Newman officiating. Inurnment will follow at Mount Hope Cemetery.
Honorary Pallbearers will be her grandchildren.
Memorials have been suggested to the Imperial Library Foundation or the Wauneta Ambulance Fund.
Online condolences may be left at liewerfuneralhome.com.
Liewer Funeral Home entrusted with arrangements.