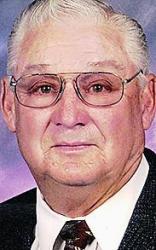 Harold Dean Pursley was born on Nov. 4, 1932 in Benkelman, Nebraska to Vester and Marjorie Pursley, the fifth child of seven. Dean was a lifelong resident of Dundy County. He attended school in Benkelman and was an athlete in every sport offered, playing with his numerous Pursley cousins. He was baptized in 1950 in the Benkelman Presbyterian Church. In the years following his 1950 high school graduation he worked as a brick mason with Pursley relatives and built numerous brick structures in Benkelman. He married Charlene Ann Nordhausen on May 24, 1953 at St. Paul’s Lutheran Church in northern Dundy County, and was later confirmed there. He has been a member there for 67 years. Dean and Charlene made their home on the South Divide where they lived together until health issues caused him to move to Wauneta Care Therapy Center in 2016. They were blessed with four children, two daughters and two sons in their 63 years of marriage.
Dean’s marriage to Charlene began his lifelong career as a farmer/rancher in which he was later joined by sons and grandsons. He adapted well from growing up as a “town kid” to a “farm boy.” His addition to their operation was the introduction of purebred blank Angus cattle. He was a progressive farmer and continued the many conservation practices started by his father-in-law, Chris Nordhausen. He was a member of the Lutheran Laymen League and the voter assembly at St. Paul’s Lutheran Church and held many offices. He served on the school board of Rural District 33 until consolidation closed its doors. He helped with his children’s 4-H activities and coached Little League Baseball. He loved baseball and played in an adult men’s league for many years. He enjoyed hunting and fishing with his boys and loved his hunting dogs. He was an enthusiastic supporter of all the activities his children and grandchildren were in. He followed Benkelman Tiger sports for years. Dean was a good card player and they belonged to a card club for many years.
Dean went to his heavenly home on Feb. 3, 2021 at the age of 88 years.
Dean was preceded in death by his parents; parents in law; his wife Charlene; brothers James, Jack (Faye) Horton, Bill (Helen) Horton; sisters Anita (Eugene) Mundt, Jean (Roy) Nippert; brother-in-law Robert Higgins; sister-in-law Elvera (Jim) Mullanix; infant son; and infant great granddaughter, Anika Upton.
Dean is survived by sister Patricia Higgins of Los Angeles, California; brother and sister-in-law Donna (Dennis) Gockley of Wauneta.
Rejoicing in his Salvation are his children: Rebecca (Steven) Erickson of Omaha, Chris (Annie) Pursley of Enders, Michael Pursley of Thornton, Colorado and Teresa (Stephen) Swoopes of Omaha.
Grandchildren: Ruthanne Erickson of Thornton, Colorado, Carl Erickson of Omaha, Caleb (Michelle) Pursley of Benkelman, Andrew (Meghann) Pursley of Wauneta, Adrianne (Ben) Lewandowski of Lincoln, Zachariah Pursley and wife of Boston, Massachusetts, Alexandra and Ambrosia Pursley of Loveland, Colorado, Abbie (Ron) Siemers of Benkelman, Eleanor Upton of Omaha and Levi (Jessica) Upton of Omaha; step-granddaughters Brittney Swoopes of Omaha and Kelsey Swoopes of Chicago, Illinois.
Great-grandchildren: Adelaide, Sage and River Erickson, Dietrich and Austin Pursley, Ashlynn and Isaiah Pursley, Jocelyn and Rhett Siemers, Amelia and Madelyn Lewandowski; step great-grandchildren Jordyn, Jeriah and Andre; and many nieces and nephews.
Services were held Monday, Feb. 8 at St. Paul’s Lutheran church, rural Wauneta, with Pastor Keith Wellman officiating. Burial was at St. Paul’s cemetery with arrangements by Liewer Funeral Home. Memorials have been established to St. Paul’s Lutheran Church and Wauneta Care & Therapy Center.