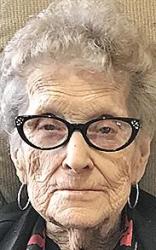 Ferne Lucille Malcolm (Jones) was born on July 5, 1924 to Harold and Marie Jones in Mahomet, Illinois and was raised on a farm. She graduated from Mahomet High School in 1943.
In August of 1946, at the urging of a friend, she traveled by train to McCook and on to Imperial, Nebraska, where she was employed as a receptionist in a Doctor’s clinic. She met returning WWII Veteran, D.E. “Deebo” Malcolm Jr. and they were married on June 14, 1947 in St.Francis, Kansas.
They lived on a farm east of Imperial where Dee was engaged in farming in Nebraska, Kansas and Colorado until 1987 when they moved into Imperial. During her years in Chase County not only was a devoted farm wife but also worked outside the home. She was employed, part time by several local businesses, weighed trucks for Great Western Sugar Beet Co, sorted onions for the Harris Farm, and worked for May Basket Potato Co.
In the spring of 1987, Dee and Ferne started a new career. They began working for the Nebraska State Fair and Ferne served as Campground Superintendent until the position was eliminated in 2004.
Her love of people was a great asset in being host of the park campground and she added to her list many cherished friends from all across the country and she remained in contact with. Ferne then moved to Hickman to be closer to her daughter and family. She enjoyed making new friends; and joined the Hickman Presbyterian Church.
In the summer of 2007, Ferne moved to Waverly and remained there until for health reasons, she moved to The Waterford Assisted Living Facility in Lincoln, where she met and enjoyed more friends and lived happily until she woke-up in Heaven on the morning of July 17, 2020 at the age of 96.
Ferne was the last surviving charter member of the Andrew Kinder Post 4688 Women’s VFW Auxiliary and served as District President in the 1960s, the American Legion Imperial Chapter of Eastern Star, and Bethany Women’s Club in Lincoln.
Ferne enjoyed playing cards, especially her bridge groups, bowling, entertaining friends and family. She was a wonderful cook and loved traveling the country when she was able. Her last big adventure was a plane trip to South Carolina to visit her oldest grandson, Garrett Smith, in Holly Hill, South Carolina and they visited Charleston and the area. Above all, she loved her husband, children, grandchildren, and great-grandchildren and special times she spent with each of them.
Preceding her in death were her parents; her beloved husband Dee in 1994; brothers, Harold Jones and wife Pauline, Robert Jones and wife Patricia, half-sister Lenora and husband John McMullen; son Chris R Malcolm; grandson Spencer S Smith; daughter-in-law Carol Malcolm; nephew Harry E Kinner Jr ;great-niece Shelly Adee (Robertson); In-laws: Mary and Harry  Kinner Sr, Violette and Phil Langin, and LT Raymond Houston and wife Elsie (Topsy).
Survivors include her son, D.E. “Scott” Malcolm III of Gering; daughter, Vicky (Stan) Smith of Lincoln; daughter-in-law Bonnie (Chris) Malcolm of Lincoln and son, Ricky (Nancy) Malcolm of Pine Bluffs, Wyoming; 13 grandchildren 27 great-grandchildren; two great-great-grandchildren; sister-in-law, Phyllis Langin of Imperial; niece, Karen (LaVerne) Robertson of North Platte;  niece-in-law, Suzanne Kinner of Ogallala; nephew, Joe (Martha) Langin of Imperial; Dr Mary Kay Houston-Vega of San Antonio, Texas; other special family members and a host of wonderful and faithful friends in the Chase County area and all across the US.
There will be no viewing and her final resting place will be with her husband at Ft. McPherson National Cemetery, Maxwell where due to Covid-19 restrictions, there will be private graveside services at a later date.
Memorials may be sent c/o Vicky Smith at 3148 King Ridge Blvd, Lincoln, NE 68504 for future designation.
Grandma’s Pearls of Wisdom
I’ve traveled paths you’ve yet to walk
Learned lessons old and new
And now this wisdom of my life
I’m blessed to share with you
Let kindness spread like sunshine
Embrace those who are sad
Respect their dignity, give them joy
And leave them feeling glad
Forgive those who might hurt you
And though you have your pride
Listen closely to their viewpoint
Try to see the other side
Walk softly when you’re angry
Try not to take offense
Invoke your sense of humor
Laughter’s power is immense!
Express what you are feeling
Your beliefs you should uphold
Don’t shy away from what is right
Be courageous and be bold
Keep hope right in your pocket
It will guide you day by day
Take it out when it is needed
When it’s near, you’ll find a way
Remember friends and family
Of which you are a precious part
Love deeply and love truly
Give freely from your heart
The world is far from perfect
There’s conflict and there’s strife
But you can still make a difference
By how you live your life