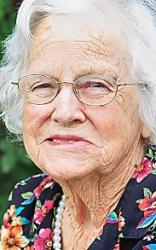 Eva June Cowles was born Sept. 22, 1928 to Henry Grover and Dessie Gay Felt in Hiawatha, Nebraska. Eva’s family moved to Champion in 1929 where she lived until moving to Englewood, Colorado as a teenager. After graduating from Englewood High School in 1944, she met and married Robert “Coke” Cowles on Oct. 4, 1947.
In 1954, they moved to Bellflower, California where they raised their four children. Eva worked as a bookkeeper for several different companies. She loved to cook and spend time with her family and friends. Eva loved going to the ocean and was active with her children’s activities and sports. In 1974, Eva and Coke moved to Enders and bought the Enders Café. After retiring, Eva spent her time traveling, visiting family members and going to auctions.
Eva Cowles passed away Monday, Sept. 9, 2019 at the Wauneta Care and therapy Center in Wauneta, Nebraska. She was 90 years of age.
She was preceded in death by her parents, Henry and Dessie Felt; her husband, Coke; brothers Woodrow, Wilson, Jim and Leonard and sisters Liz, Clara, Ada and Lena.
Survivors include, sons Leonard (Maria) Cowles, Robert (Margie) Cowles; daughters Valerie (Steve) Krenz, Vickie (Gary) Miner; 11 grandchildren and 25 great-grandchildren along with many nieces and nephews.
Private family services will be held at a later date.
No viewing or visitation; Eva chose cremation.
A memorial has been established to the Cowles Family for future designation.
Online condolences may be left at liewerfuneralhome.com.
Liewer Funeral Home is entrusted with arrangements.