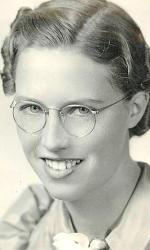 Esther Marie Lytle was born Aug. 5, 1922, in Imperial, Neb., to Elsie Ellen (Smith) and William Leighton Morse. Esther attended Chase County High School and graduated as valedictorian of her class in 1940.
On April 18, 1941, Esther married Edwin Herman Lytle in Bird City, Kan. Ed and Esther settled in the Chase community northwest of Imperial.
They lived there until the spring of 1950 when they moved to a ranch in South Park, Colo., but decided to move back to Chase County in the fall as the high altitude wasn’t favorable to Ed’s ears.
They built a garage and moved into it while building their new home. They moved into the new home in Nov. 1952.
The next day, son Gene was taken to the hospital and passed away later in the week from bulbar polio.
They lived there until December of 1960 when they moved to the farm east of Hamlet. In the spring of 1976 they moved to the farm south of Wauneta.
In 1985 they began building their new house east of Hamlet on the north side of the highway, moving into it in 1987.
Ed passed away there in March of 1997. Esther continued to live there until spending a short time in March and April of 2010 in Heritage of Wauneta after a fall. When spring came she felt well enough she wanted to go back home and take care of her flowers and garden.
She remained at home until May 22, 2012, when she moved back into Heritage of Wauneta, remaining there until her death on May 31, 2017.
Esther taught school one year (1940-41) in a rural school district northeast of Imperial and was then married to Ed that spring. She was a busy farm wife, helping Ed in all parts of farming and ranching.
After moving to Hamlet in 1960, she began giving music lessons, traveling to Imperial, Grant, Ogallala, Lewellen and McCook and possibly other towns.
In 1966 they purchased the store and gas station in Hamlet and it became Lytle’s Service. She discontinued the traveling music lessons at that time.
In 1969 they began farming Ed’s sister’s farm north of Wheeler, Kan., and sold the store in Hamlet in 1972. She began running the swather and traveled all over southwest Nebraska, even getting into northwest Kansas.
She was a substitute mail carrier for the north Wauneta route and later took it over from 1996 until 1998. Even after that time she would move the sprinkler in the alfalfa field behind her house for several years.
Esther was part of the Chase EUB church until moving to Hayes County in 1960. At that time they began attending Hamlet Union Church where she taught two and three-year-olds in Sunday School for many years.
Esther loved to garden and take care of her flowers, enjoying that right up to the time she entered the nursing home.
She played the piano, accordion, violin and guitar. She taught many others as well. She enjoyed playing along with Ed until his passing.
She taught Sunday School for many years and thoroughly enjoyed teaching the two and three-year-olds and was awarded the 1997 National Sunday School Teacher of the Year award.
Esther was preceded in death by her parents; husband Edwin; three sons, Gene, Keith and Ronald; and brothers Elwin and Dale Morse.
Esther passed away Wednesday afternoon, May 31, 2017, at the Sunrise Heights Nursing Home in Wauneta. She was 94 years of age.
Survivors include son Arnold (Janet) Lytle of Maricopa, Ariz., son Terry (Christine) Lytle of Wauneta; daughter-in-law Josie Lytle of Palisade; 11 grandchildren: Robin (Frank) McLaughlin of Hanover, Mass., Joby (Jason) Collins of Chadron, Libby (Willis) Ruppert of McCook, Joshua (Jessie) Lytle of Lincoln, Jessica (Jeff) Sims of Mesa, Ariz., Jyl (Michael Gillespie) Lytle of Kansas City, Kan., Jeffrey (Taylr Trisdale) Lytle of Benkelman. Melissa (David) Slomp of Brooks, Alberta, Canada, Crystal (Glen) Villarreal of Waverly, Rebecca LeJeune of Stratton  and Jennifer Lytle of Lincoln; 24 great-grandchildren; Lia Ehlers and Landon McLaughlin, Lauren and Braddley Collins, Natasha Nutt, Alexis and James Ruppert, Everett Lytle, Andrea and Kristen Sims, Jakob, Tyler, Jeffrey and Jax Lytle, Bethany Long, Lily Ghoniem, Genevieve Gillespie, Leighton, Paxton and Devin Slomp, Mariska and Braelyn Villarreal, Jabin Lejeune and Aemelia Valdez; great-great-granddaughter Scarlett Nutt; sister Marjorie (Wesley) Wheeler of Wauneta; brother Lee (Myrth) Morse of North Platte; and sister-in-law  Gerietta Morse of Imperial.
Funeral services were held Monday June 5, at the Hamlet Union Church with pastor Joshua Clark officiating. Inurnment will be held at the Chase Cemetery, Imperial, at a later date.
Visitation was held Sunday, June 4 at the funeral home in Wauneta.
A memorial has been established in Esther’s memory.
Online condolences may be left at liewerfuneralhome.com.
Liewer Funeral Home of Wauneta was entrusted with arrangements