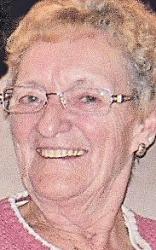 Erika, MacKay, 78, of Sidney, Nebraska and a former resident of Imperial, died early Tuesday morning, June 5, 2018 at her home in Sidney.
A visitation will be held from 7 to 8 p.m. on Thursday evening, June 7, at the Holechek Funeral Home in Sidney.
Memorials have been established to the Paralyzed Veterans.
Funeral services and burial will be in Corpus Christi, Texas next week.
Online obituary can be viewed and condolences shared with the family at www.holechekfuneralhomes.com.
Erika Edda MacKay, the daughter of Johan and Johanna (Genk) Schrenk was born March 4, 1940 in Hof/Saale, Germany. She was raised in Germany where she met and married Robert MacKay while he was stationed at the nearby U.S. Air Force Base.
She followed her husband in his military service to the United States where she became a U.S. citizen. She was a loving wife for 23 years until Robert’s death in July of 1979.
She moved to Sidney and met Larry Schroeder and had a beautiful 22 years with him until her death. She will be sorely missed by all who knew her.
Survivors include her long-time significant other, Larry Schroeder of Sidney; two sons: Michael J. (Faye) MacKay of Sidney and David A. (Brenda) MacKay of Hot Springs Village, Arizona; two daughters: Sandi (Craig) Keenon of Fernley, Nevada and Catherine (Dr. Darryl) Smith of Corpus Christi, Texas; one sister Rosa A. Myers of Sidney; 11 grandchildren and eight great-grandchildren.
Holechek Funeral Home and Cremations in Sidney is serving the MacKay family.